In regional game-changer, US seeks to sell F-35 jets to UAE 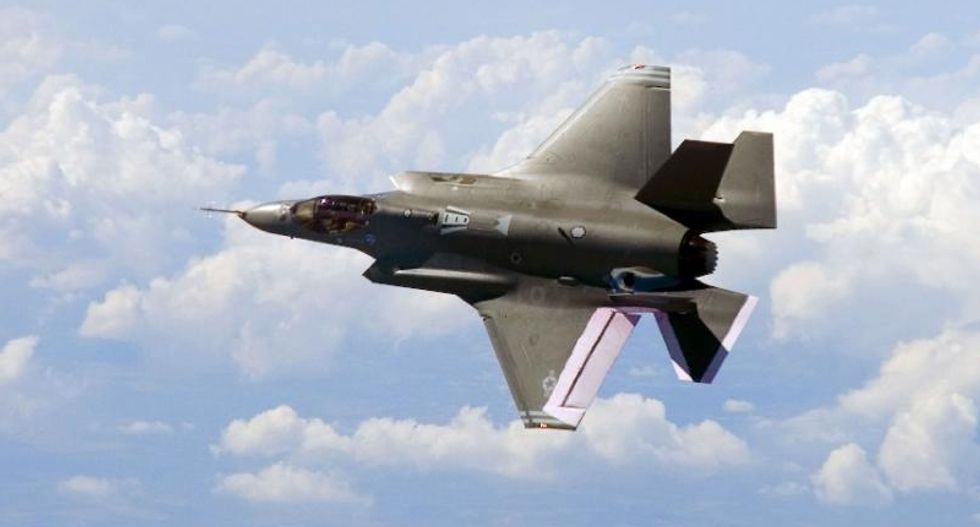 The F-35 fighter jet is supposed to form the backbone of the US military's future fighter fleet, ensuring US dominance in the skies for years to come with radar-evading technology (AFP Photo/)

The United States has agreed to sell more than $10 billion of top-of-the-line F-35 fighter jets to the United Arab Emirates to reward its recognition of Israel, potentially reshaping power dynamics in the turbulent region, Congress was informed Thursday.

In an informal but required notification to Congress, President Donald Trump's administration said it had approved the sale of 50 F-35 Joint Strike Fighters -- equivalent to Israel's fleet of the jets -- worth an estimated $10.4 billion, a congressional aide said.

If it goes ahead, the sale could "significantly change the military balance in the Gulf and affect Israel's military edge," said Representative Eliot Engel, a Democrat who leads the House Foreign Affairs Committee.

Robert Menendez, the top Democrat on the Senate Foreign Relations Committee, voiced skepticism, saying Trump was rushing a deal without thinking through the consequences.

"Claiming Israel will maintain its edge while offering Abu Dhabi the same number of these sophisticated stealth warplanes as Israel simply does not add up," Menendez said.

The United Arab Emirates -- which has been increasingly assertive in the region, including in Yemen and Libya -- sought the advanced warplanes as it was speaking to the United States ahead of its landmark recognition of Israel last month.

The normalization -- followed by similar moves by Bahrain and Sudan -- was a diplomatic coup for Prime Minister Benjamin Netanyahu and Trump, but the Jewish state has also long opposed US sales of top-end warplanes to any Arab states including Egypt and Jordan, which already have peace treaties with Israel.

Netanyahu, however, indicated last week that Israel would not object to the UAE deal after Defense Minister Benny Gantz, his uneasy coalition partner, received assurances during a trip to the Pentagon that Israel would maintain its military advantage.

US Defense Secretary Mark Esper was visiting Israel on Thursday to follow up on ways to bolster the US ally, an undeclared nuclear power.

News site Breaking Defense said Israel was seeking to preserve its edge by buying other advanced weapons including the V-22 Osprey helicopter-aircraft hybrid.

The F-35 is considered one of the world's most advanced -- and most expensive -- warplanes.

Built by Lockheed Martin, the F-35 has stealth capability as well as high-end sensors and data-collection tools, meaning the plane can be deployed for airstrikes, air-to-air combat or intelligence gathering.

A State Department official declined to confirm the UAE sale, saying that it does not comment on notifications to Congress.

The notification comes five days before US elections in which Trump is trailing to Democrat Joe Biden.

Congress, where the Democrats control the House of Representatives and are seen as having a substantial chance of winning the Senate, has the power to block the UAE sale.

"Rushing these sales is not in anyone's interest," said Engel, a staunch supporter of Israel who was defeated by a Democratic primary challenger to his left.

Engel voiced fear that the UAE sale would set off an arms race. Qatar and Saudi Arabia have also voiced interest in the F-35.

"Will the price for normalization with Israel be an infusion of advanced weapons? Is this wise?" he said.

But weighing into the calculus for Israel and Trump is that the Emiratis largely share their view on who is their primary foe in the region -- Iran.

An embargo on conventional arms sales expired earlier this month on the clerical regime, which sees a threat from the US military presence around the region.

The stealth F-35 "would allow Emirati pilots to penetrate Iranian defenses in response to hostile actions and execute precision strikes against threatening Iranian and proxy targets throughout the Persian Gulf region," Lieutenant Colonel Christine McVann, a military fellow at the Washington Institute for Near East Policy, wrote in a recent analysis.

NATO member Turkey, which has an increasingly tense relationship with Israel, was evicted from the F-35 program last year after it bought the S-300 air defense system from Russia.