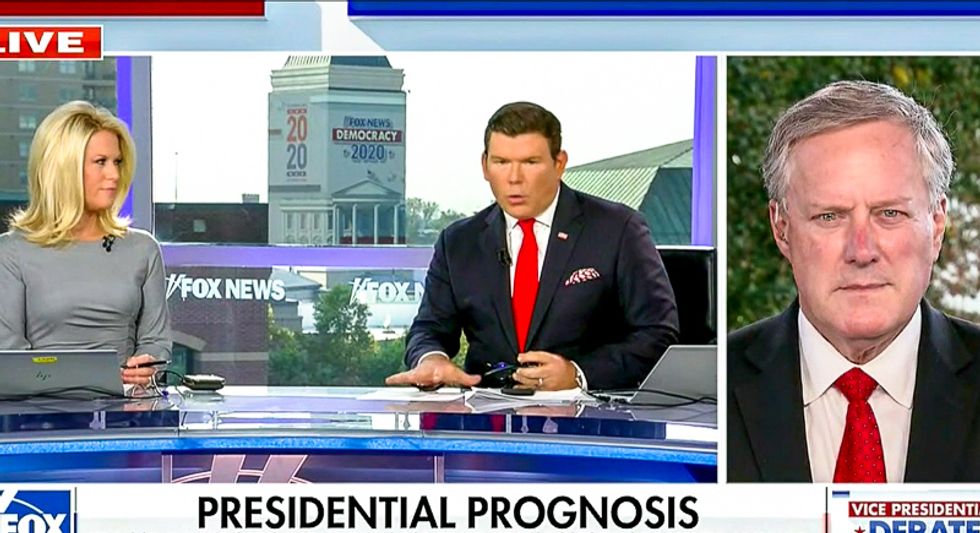 Fox News hosts Martha MacCallum and Bret Baier on Wednesday pressured White House Chief of Staff Mark Meadows to divulge the details of President Donald Trump's most recent negative COVID-19 test, which would give insight into how his infection is progressing.

During an appearance on Fox News, Meadows revealed that White House staffers are dressing in "full" protective gear if they have a need to enter the Oval Office after Trump returned earlier today.

"You know, there's a lot of talk about when he first contracted the virus," Baier told Meadows. "And there are a lot of things we still don't know."

"We don't know when his last negative test was," the Fox News host continued. "Will we?"

"Well, we don't normally get into the testing protocol for the president," Meadows replied. "Obviously, the doctor has already spoken about that, that it was a positive test on last Thursday evening when he was confirmed to have the coronavirus."

"We caught it very, very early," he added. "We're just very thankful that he's where he's at and we're looking forward to hopefully having a not only a healthy president, but a healthy America."

MacCallum tried again to push Meadows to give a timeline of the president's most recent negative test.

"I just want to go back around to this one more time," MacCallum said. "Because it was put out today that the Gold Star families that were at the event at the White House on Sept. 27 have been told that they may have been exposed to coronavirus when they were there."

"So, that's why it's so important to know when his case was active," she continued, "and the places he went during that time and also all the other people at the White House."

Meadows, again, sidestepped the question by suggesting that the Gold Star families were notified out of an abundance of caution.

"That's to try to make sure that we can mitigate the risk of anybody that has come in contact with it," Meadows said. "Anybody that was at risk has been contacted."