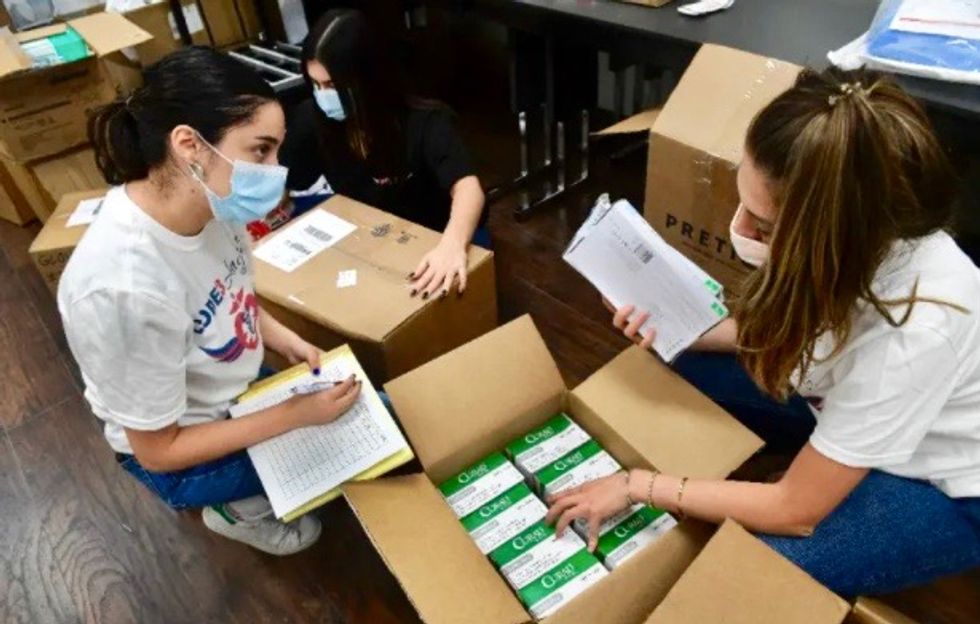 No sooner had the conflict in Nagorno-Karabakh escalated last month than the huge Armenian community in Los Angeles began mobilizing to send food, medical equipment and other supplies to the "homeland."

"The second it started, we were like 'what are we going to do?' and we started working immediately," said Sosse Krikorian, who spoke with AFP this week near Los Angeles as she sorted aid destined for the tiny enclave at the heart of the fighting between Azerbaijan and Armenia.

The territory -- referred to as the Republic of Artsakh by Armenians -- is recognized as part of Azerbaijan but its population is majority ethnic Armenian.

For Los Angeles's Armenian community -- one of the largest in the world -- the decades-old conflict, thousands of miles away, is very much personal and the latest escalation of violence has triggered an outpouring of support.

"We're all very connected to our homeland. Armenia is sacred for us," said Nora Hovsepian, chairwoman of the Armenian National Committee of America-West Region (ANCA-WR).

Hovsepian estimated the number of Armenians across the United States to be at 1.5 to two million, with about one million living in California alone, the majority of them in the Los Angeles area.

"Every Armenian that you talk to these days wants to do something, whether it's donating money, donating goods, calling media outlets or calling members of Congress," added Hovsepian who was born in the US and whose ancestors fled the Armenian genocide.

'Armenia is my homeland'

The outpouring of solidarity from the community in LA is visible throughout the city, notably in the majority-Armenian suburb town of Glendale or in "Little Armenia," where many shops proudly display the Armenian flag or have set up collection boxes.

Celebrities who trace their roots to Armenia, like singer Cher or reality TV star Kim Kardashian, have also sought to shine a spotlight on the deadly conflict on social media.

Others like 21-year-old Krikorian help by gathering aid supplies destined for the fighters on the frontline.

"We already shipped over 1,000 boxes of medical supplies... and we have another flight coming up soon," proudly says her father Joe Krikorian, who heads a non-profit that provides extensive first-aid training in Armenia and Nagorno-Karabakh.

"They're running short on a lot of things," he added. "We're getting calls every day 'we're out of sutures, we're in need of tourniquets' and we're trying to get it there as soon as possible."

Krikorian, who was born in Lebanon, said dozens of volunteers and family members have turned out to help at his company while other organizations in the LA region were collecting clothing or food.

"I only have American citizenship but Armenia is my homeland -- it's my blood, it's my roots, my grandparents were part of the genocide" said the 48-year-old.

Armenians say that up to 1.5 million people were killed by Ottoman Turks during World War I in what amounted to genocide, a claim supported by some 30 countries. Turkey rejects the genocide label and says that Turks also died in civil strife.

Raffi Sarkissian, a board member at ANCA who heads a small team of volunteers planning to travel to the enclave in the coming days, said the biggest challenge has been sorting out logistical issues to ensure the aid reaches the enclave.

He said a lot of the aid has been stuck in Europe or the US because of the heavy fighting and his aim was to set up a supply chain to ensure medical equipment and other supplies reach Armenia and eventually the front line.

"Right now, because of logistics, we need to be on the ground over there," he said. "That way we can assess with the local government whatever is needed."