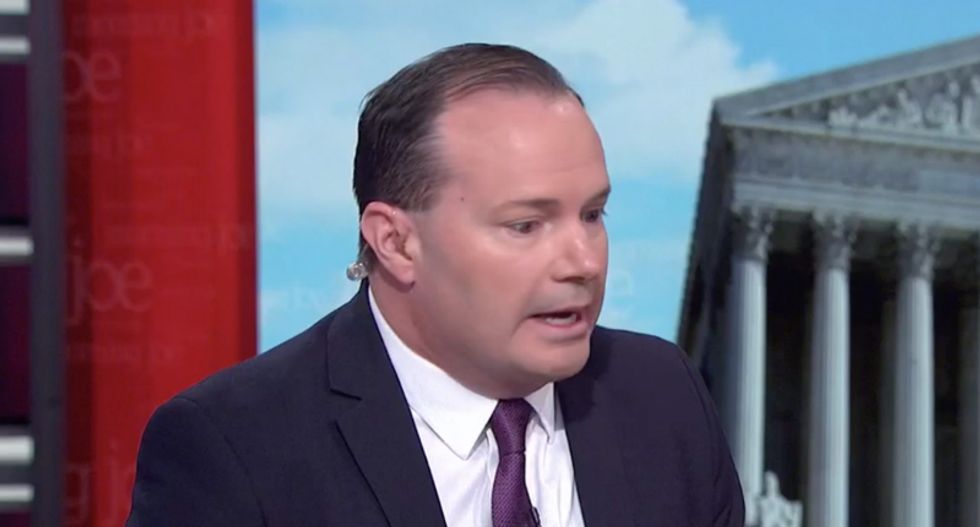 Sen. Mike Lee (R-UT) repeatedly claimed the United States was not founded as a democracy, but legal experts from both sides of the political spectrum disagree.

The Utah Republican claimed that "rank democracy" could undermine "liberty, peace, and prospefity [sic]," and argued the U.S. was established as something else.

"The word 'democracy' appears nowhere in the Constitution, perhaps because our form of government is not a democracy," Lee tweeted, while he self-isolates after testing positive for coronavirus. "It’s a constitutional republic. To me it matters. It should matter to anyone who worries about the excessive accumulation of power in the hands of the few."

The word “democracy” appears nowhere in the Constitution, perhaps because our form of government is not a democracy… https://t.co/eMbhysMvgJ
— Mike Lee (@Mike Lee)1602119192.0

But many legal scholars -- and the Founding Fathers themselves -- have found those well-worn arguments to be specious.

"The United States is not a direct democracy, in the sense of a country in which laws (and other government decisions) are made predominantly by majority vote," wrote conservative law professor Eugene Volokh. "Some lawmaking is done this way, on the state and local levels, but it’s only a tiny fraction of all lawmaking. But we are a representative democracy, which is a form of democracy."

The Framers generally drew a distinction between "pure democracy" and a "republic," but they understood the representative democracy they had established to be a form of democracy, rather than a separate and distinct form of government.

So, what exactly is a republic, anyway?

According to Merriam-Webster, it's "a government in which supreme power resides in a body of citizens entitled to vote and is exercised by elected officers and representatives responsible to them and governing according to law."

Oh, and it's not presided over by a monarch. James Madison, who wrote the Constitution, explains in Federalist 39 clearly how the Framers defined a republic.

"We may define a republic to be, or at least may bestow that name on, a government which derives all its powers directly or indirectly from the great body of the people, and is administered by persons holding their offices during pleasure, for a limited period, or during good behavior," Madison wrote.

Sounds like a democracy. So what's the difference between that and a republic? Again, Madison offers some guidance, in Federalist 10.

"The two great points of difference between a democracy and a republic are: first, the delegation of the government, in the latter, to a small number of citizens elected by the rest; secondly, the greater number of citizens, and greater sphere of country, over which the latter may be extended," Madison wrote.

The Founding Fathers established safeguards against the "tyranny of the majority" -- the Senate and the Supreme Court, to name two -- but majority rule was always the intention. Says right there in Federalist 22.

"Republican government ... requires that the sense of the majority should prevail," wrote that paper's author, Alexander Hamilton.

The distinction between small-D democratic and small-R republican governance can be traced back to the 1930s and 1940s, when isolationist conservatives pushed back against President Franklin D. Roosevelt's promise to defend democracy against European fascists.

“The United States was never a democracy, isn’t a democracy, and I hope it will never be a democracy,” wrote isolationist columnist Boake Carter in October 1940, arguing against U.S. involvement in World War II.

Robert Welch, founder of the virulently right-wing John Birch Society, popularized the distinction as a slogan in a September 1961 speech.

“There is a centralization of governmental power in a simple majority, and that, visibly, is the system of government which the enemies of our republic are seeking to impose on us today," Welch said. “This is a republic, not a democracy. Let’s keep it that way.”

The slogan is thrown about on Fox News and talk radio -- or by Republican lawmakers -- to justify unpopular manifestations of minority rule, but its origins on the right-wing fringe matter.

"The point of the slogan isn’t to describe who we are, but to claim and co-opt the founding for right-wing politics — to naturalize political inequality and make it the proper order of things," wrote New York Times columnist Jamelle Bouie. What lies behind that quip, in other words, is an impulse against democratic representation. It is part and parcel of the drive to make American government a closed domain for a select, privileged few."

It's curious that Lee -- whose Twitter bio seeks help to "restore constitutional leadership to Washington" -- would have that legal fallacy on his mind as his party's deeply unpopular president faces an increasingly likely defeat, that neither President Donald Trump nor Vice President Mike Pence have pledged to accept.