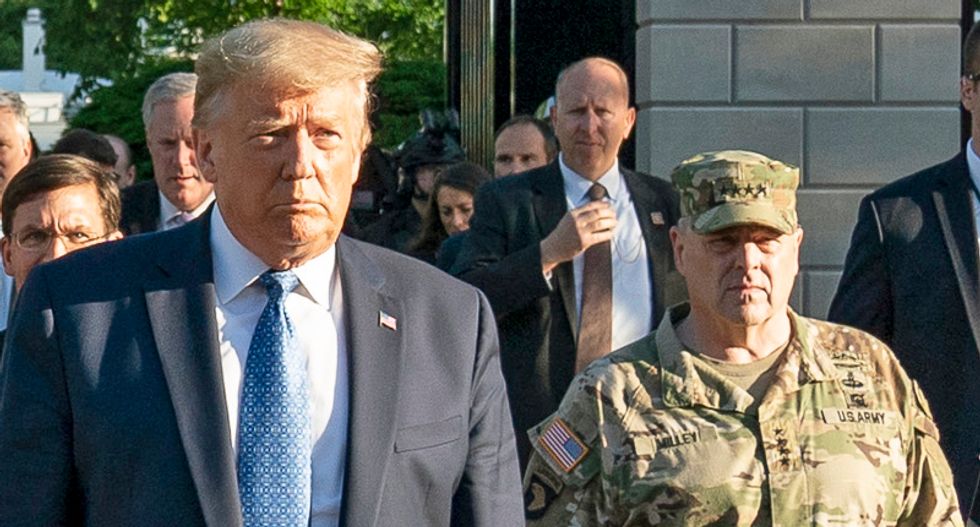 President Donald Trump is now battling symptoms of COVID-19. But instead of his positive diagnosis signaling a warning for White House staff members, the series of events that have transpired this week have only further exposed the Trump administration's carelessness and chaotic pandemic response.

As more reports begin circulating about the president's condition, additional details about his busy week are also coming to the light. Even after the White House learned Trump adviser Hope Hicks had tested positive for the virus, the president still opted to move forward with his public schedule on Thursday

According to The Washington Post, after Hicks's diagnosis,Trump attended a fundraising event at his golf club in Bedminster, N.J., where he was in very close contact with dozens of people including multiple campaign donors. It has been reported that most attendees did not wear masks or social distance during the indoor event.

The president's trip to New Jersey and his late night COVID-19 diagnosis came one day after his trip to Minnesota. On Wednesday, Trump traveled with Hicks, multiple White House aides, and multiple members of his campaign entourage. Photos and footage captured them boarding Marine One with no masks.

On Friday morning, White House Chief of Staff Mark Meadows spoke briefly where he opted to focus on highlighting positive stock market changes instead of the dominant issue at hand. Despite having traveled with the president earlier this week, Meadows attended the brief press conference with no mask. When asked about the president's decision to attend the fundraiser on Thursday evening, Meadows seemed to dodge the question.

Now, Trump's recklessness and misinformation is taking centerstage. Twitter users have also flooded the network recalling many of Trump's most profound moments of carelessness and mocking of those who adhere to mask mandates.

The first family is also being criticized for their actions the night of the first presidential debate. Reports have revealed they refused to wear masks during the political event. It is also important to note that Hicks also attended the debate which occurred one night before she tested positive.

Due to Trump attending multiple events while refusing to adhere to mitigation guidelines in multiple states, contact tracing also appears to be relatively difficult.

Despite cases rising in and around the White House, there is still no plan to enforce a mask mandate. A White House official told Axios that face coverings are "recommended but not required."

"Our standard protocol is CDC best practices and recommendations," a White House official told the publican. "Facial coverings are recommended but not required. There's hand sanitizing stations located throughout the complex, frequent washing of hands and good hygiene is strongly recommended and social distancing is encouraged. So, I don't foresee those things changing."

Although the president is said to be experiencing "mild symptoms," his repeated attempts to spread disinformation have damaged his credibility from all angles. After Trump announced he and his wife had contracted coronavirus, some Twitter users were apprehensive to believe that the president does, indeed, have the virus.

MSNBC's Joy Reid took to Twitter with a report about the questions she is receiving about Trump's positive test results.

However, the White House doctor confirmed the president and first lady's diagnoses on the record, and there's little substantive reason to doubt the report.

As of Friday afternoon, the United States has confirmed more than 7.5 million coronavirus cases, nationwide, including the president and first lady.