Medical experts: Trump is still highly infectious -- and still may not be 'out of the woods' until next week 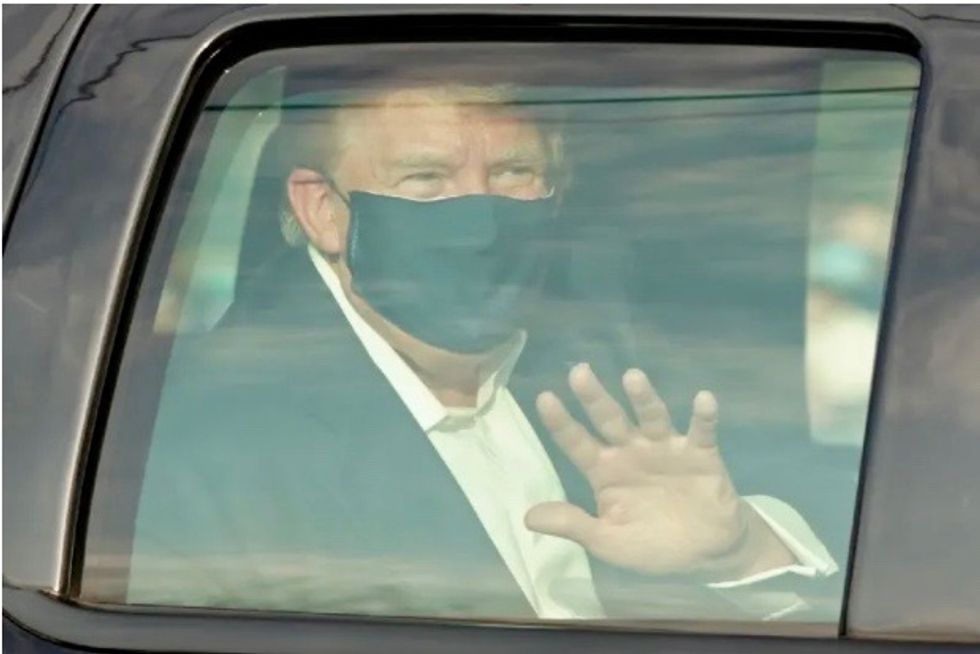 Donald Trump (AFP)
Despite being diagnosed with COVID-19 just last week, President Donald Trump was discharged from Walter Reed National Military Medical Center on Monday after a long weekend stay. Yet medical experts who spoke with Salon agreed on two things: He isn't out of the woods yet, health-wise, and by working while ill, he is putting the people around him at risk for contracting coronavirus.

To understand why, one only need to look at the timeline for coronavirus infections. (A note on nomenclature: while one gets infected with the novel coronavirus, the disease that the virus can cause is known as COVID-19.) A study by the World Health Organization found that a common order of symptoms for COVID-19 sufferers goes like this: first, a fever, then coughing and muscle pain, then nausea or vomiting, and then diarrhea. Trump is reported to have exhibited symptoms including coughing, congestion, fever and fatigue.

"When you get exposed, the incubation periods for the virus is about 14 days," Dr. Russell Medford, Chairman of the Center for Global Health Innovation and Global Health Crisis Coordination Center, told Salon. "That's why we have the 14 day quarantine period, the median time it takes to actually show symptoms after being exposed, where the virus has to grow and develop a sufficient concentration to develops symptoms. It's about four to five days to symptoms onset. So if you're infected, roughly four to five days from that infection is when you start developing symptoms."

That timeline implies that Trump would still be quite infectious at this point.

Medford added that, because Trump is an elderly and overweight male, he is in a higher risk category than many other patients who get sick with COVID-19.

"For somebody like the president in his risk category, we're looking at eight to 12 days of observation in which symptoms may progress in a waxing and waning pattern," Medford explained. "Waxing and waning means a characteristic of the disease is, you tend to do better, and then the next day you can do worse, depending on the individual and the risk factors going forward. So I'd say somewhere around eight to 12 days from the onset of symptoms is where you'll see progression."

Medford speculated that observers would be able to better gauge whether the president is "probably out of the woods" early next week.

As Tim O'Brien, a columnist who wrote a biography of Trump, noted on Twitter, former Republican presidential candidate Herman Cain tested positive for COVID-19 on July 2 and — despite repeatedly claiming that he was getting better — died four weeks later.

Yet regardless of whether Trump winds up recovering, he is unquestionably putting other people in danger, from the Secret Service who follow him when he is in public to the staffers who are discouraged from wearing masks around him.

"He's potentially infectious to the people around him. It is no different than a patient in the hospital," Dr. Carlos del Rio, Distinguished Professor of Medicine at Emory University School of Medicine, told Salon. "I sit in a room in isolation, but when I have to go in to see a patient, I wear my mask and my goggles and my gown and my gloves so I don't get infected."

"The people around him need to protect themselves," Del Rio added.

Del Rio emphasized that Trump himself is not in unusual danger, despite leaving the hospital.

"This guy is in the White House with doctors, with nurses, with people continuously watching him," Del Rio told Salon. "He might as well be in the hospital. The White House, I'm sure, has full medical staff on top of him, so he's in no danger. And if they see him getting a little worse, he's got a pretty good helicopter to take him right back to the hospital." Del Rio's point, however, was that the people around him need to take precautions "so they don't get infected. It's irresponsible of him not to be in isolation. It's selfish of him to have to wear a mask and not to be in isolation. It shows little respect for other people."