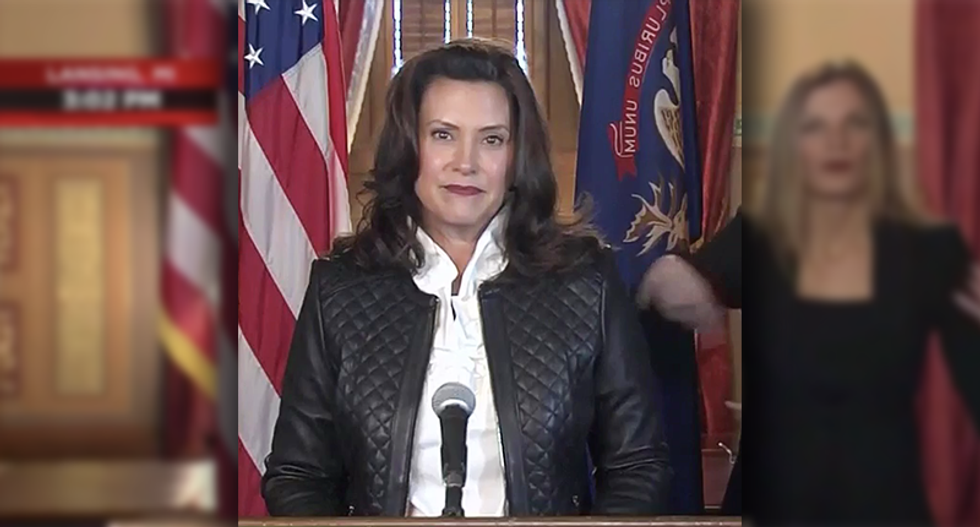 In a state address, Michigan Gov. Gretchen Whitmer addressed the groups of militia members who were plotting to kidnap and possibly even kill her after her coronavirus lockdown and the mask mandate.

She explained that the coronavirus has exposed deep inequities in American society, but she called for national unity.

"Seeing the humanity in one another and doing our part to help our country get through this," she encouraged people. "Instead our head of state has spent the past seven months denying science, ignoring his own health experts, stoking distrust, and giving comfort to those who spread fear and hatred. The president of the United States stood before the American people and refused to condemn white supremacists and hate groups like these two militia groups. 'Stand back and stand by,' he told them. 'Stand back and stand by.' Hate groups heard the president's words as a rallying cry, as a call to action."

She went on to say that words matter when American leaders speak and they carry the weight. Trump spent several months attacking the governor online and demanding someone "LIBERATE MICHIGAN."

"When our leaders meet with, encourage or fraternize with domestic terrorists they legitimize their actions and they were complicit," she said. "When they contribute to hate speech, they're complicit," Whitmer continued.

She went on to recall a 1981 speech by President Ronald Reagan at the NAACP's annual convention.

"His comments stand in stark contrast to what we've seen on the national and state level from his own beloved party in 2020," the governor went on. "He said a few isolated groups in the backwater of American life still hold perverted notions of what America is all about. Recently in some places in the nation, there's been a disturbing recurrence of bigotry and violence. Then Reagan sent a direct message to those who still adhere to senseless racism and religious prejudice. You are the ones who are out of step with our society he said. You are the ones who willfully violate the meaning of the dream that is America. This country, because of what it stands for, will not stand for your conduct."

She closed by asking for grace and care among all people in such a difficult time in the pandemic.