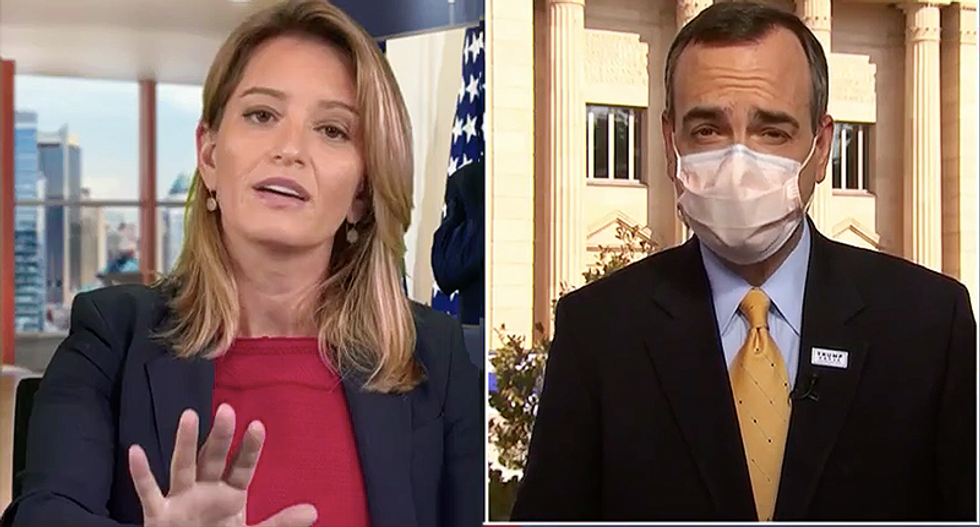 President Donald Trump is getting a rude awakening as he recovers from the coronavirus at home Tuesday. Juiced up with steroids, the president tweeted on Monday evening that people shouldn't be afraid of COVID-19 and "don't let it dominate you."

It brought about many responses from survivors of the virus and family and friends of the 210,000 Americans who have died from COVID-19.

MSNBC host Katy Tur showed the video from Actor Nick Cordero's widow and fellow actress, Amanda Klotts. She tried to explain to the president that her husband wasn't only "dominated" by COVID-19; he was killed by it.

"I stand by you, with you, holding your hand," she told families who are facing down the global pandemic.

"Unfortunately it did dominate our lives, didn't it? It dominated Nick's family's lives and my family's lives. I guess we 'let it' – like it was our choice??" she continued.

"Unfortunately, not everyone is lucky enough to spend two days in the hospital," she said, referring to Trump's short jaunt to Walter Reed. "I cried next to my husband for 95 days watching what COVID did to the person I love. It IS something to be afraid of."

Trump campaign communications director Tim Murtaugh refused to correct the president instead of explaining what he "meant" by the claim that people shouldn't be afraid of the virus.

"The president's point is, he wants people to take it seriously, he wants people to take precautions, but we cannot let it run our lives for us," Murtaugh said. "It sounds like you advocate another countrywide lockdown and the worst thing we could do. To lock the country down again would be to invite all sorts of medical problems not associated with the coronavirus. People would not get diagnosed with a serious disease, cancer treatment. and then kids not in school is problems for those kids--"

Kloots' video begged the president for "some empathy," and Tur cited another family who lost their daughter from COVID-19 while she was alone in the hospital.

"Did she let the virus dominate her?" Tur asked.

"What the president has done since the beginning of January, you remember it was the first week of January when the CDC started issuing travel warnings for China and also conducting screenings at major American airports and followed with the restriction of travel to the United States from--" Murtaugh said, trying to dodge the question. Tur interrupted him again, asking if he could answer the question. If these families that are being decimated by COVID-19 are being "dominated" as Trump claimed.

"Tim, hold on. Let me speak. Hold on. I am asking you to respond to this Minnesota family who lost their loved one, who died alone in the hospital," said Tur. "The president -- I know you're trying to spin what the president said, but I can read. Americans can read and hear what he said. If he meant what you're saying he meant, he would have said it himself. Did the virus dominate them? Did she let the virus dominate her as the president said yesterday?"

Murtaugh dodged the question again, instead citing the ventilators that Trump finally got companies to make after resisting implementing the Defense Production Act.

"Tim, he is comparing it again today after more than 200,000 Americans died --" Tur continued over Murtaugh.

Murtaugh never answered the question, but he did accuse former Vice President Joe Biden of trying to "scare people" away from the vaccine, something Biden has never done, but Trump's team has repeatedly misconstrued and exaggerated. Biden's team said that the people that Americans should listen to about the vaccine are the scientists and the doctors, not President Donald Trump.

See the debate below:

As reported by The Guardian's Hugo Lowell, Rep. Bennie Thompson (R-MS) confirmed that Thomas is appearing before the committee on a "voluntary basis" and he said that she will not be under penalty of perjury during her testimony.