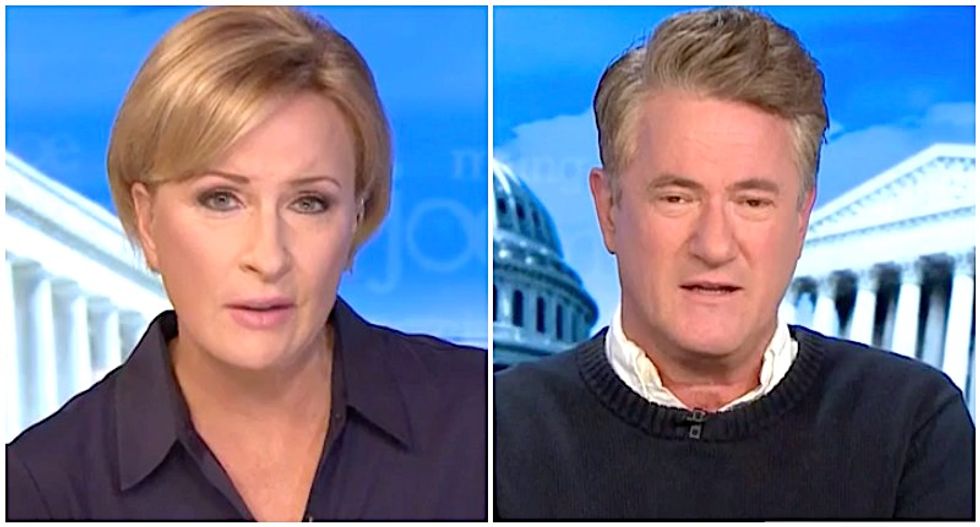 MSNBC's Joe Scarborough and Mika Brzezinski busted "certain networks" for obscuring how bad President Donald Trump has been the last four years, and how that generates a feedback loop where supporters can't imagine breaking away.

The "Morning Joe" co-hosts detailed how the presidential race remained much closer than it perhaps should be, given the continuing economic pain from the deadly coronavirus pandemic that's still raging across the country, and said that wouldn't be possible without friendly networks like Fox News and social media platforms like Facebook.

"Voters have had a view now of what his presidency is like, what his policies are like, what his decisions are like," Brzezinski said. "I would argue that Trump voters don't have that view. They don't have a clear view, they don't have the facts. I think there are certain networks and Facebook and social media empires that are helping promulgate lies that they live by. I think that could be a dangerous brew as, you know, we talk about the potential for Biden to struggle a bit or for one day to come together for him all over again."

Scarborough agreed that could happen, and he explained how consumers of those outlets help drive support for Trump by making opposition to him unthinkable.

"It's not just the misinformation that is being spread on the other networks and on social media, that is part of it," he said. "You also though cannot underestimate, and it's being talked about all the time, the negative partisanship. I have heard from so many of my friends and family members who don't say they love Donald Trump. In fact, they don't say they like Donald Trump. In fact, they would not invite him over for dinner at Thanksgiving."

"How do I know?" he added. "Because I keep hearing it from one person after another, when I say how can you support this man who has breached every constitutional norm, who breached every societal norm. They'll talk about how Democrats are socialists, they'll come back and talk about political correctness and 'wokeness.' It's the negative partisanship even more than it is Donald Trump."