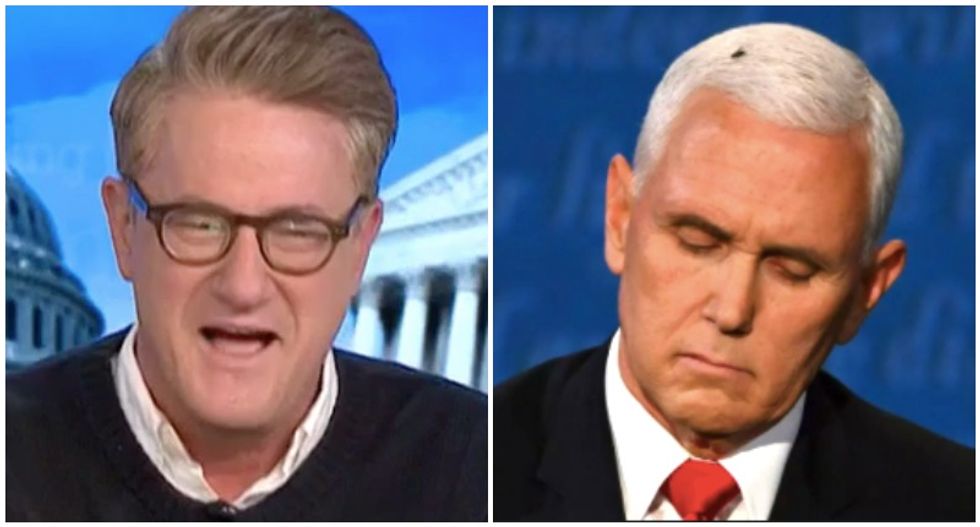 The "Morning Joe" co-hosts said whatever happened on the vice presidential debate stage was overshadowed by an insect that landed on Pence's head and remained there, stark against his closely cropped white hair, for more than two minutes.

"We are one with those who were deeply stunned and saddened as people talked about the fly after such an important debate last night," Scarborough said, somewhat sarcastically. "It minimized actually the remarkable performance of both candidates."

Scarborough wondered how that distraction went over with President Donald Trump, who has repeatedly talked about his disgust with flies, mosquitos and other insects.

"How much whatever you want to call it do you think he got from Donald Trump for having a fly on his head during the debate?" Scarborough said. "The fly was dialed in."

Brzezinski was impressed by Harris, and thought she scored a number of points against the vice president and strengthened Joe Biden's support among women.

"I thought Kamala Harris was fabulous and she was disciplined," Brzezinski said. "She was strong, she kept a fine balance in terms of tone which, you know, would be a challenge for any woman debuting on the national stage like that as a vice presidential candidate. She was reality versus whatever was happening on the other side of the stage, and she used every skill in her tool box to deliver a clear, almost, you know, near perfect performance. She was right on, spot on. That moment when she talked about the auto industry -- wow, it was incredible. She didn't overdo it or underdo it."

Brzezinski commented several times through the opening hour about Pence's seemingly pale appearance, and many observers also remarked that one of his eyes was noticeably bloodshot.

"It was hard to watch Mike Pence," she said. "Just really painful, tough. I think Kamala Harris could have been tougher on the outbreak within the White House itself and the president's condition and their lack of a transparency. She did go there a little bit."