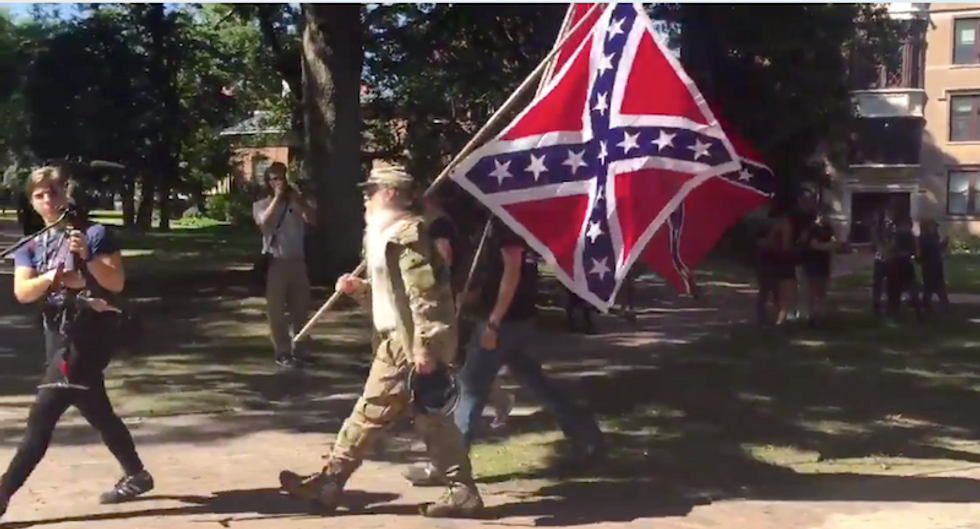 Confederates march at a rally for Silent Sam, a statue on Campus at UNC/Screenshot

An investigation into the financial dealings of a pseudo pro-Republican political action committee sheds light on how right-wing conservatives are circumventing campaign contribution laws in an effort to fund the candidates they want in office.

According to Indy Week, the State Board of Elections has zeroed in on the North Carolina division of Sons of Confederate Veterans Inc. (SCV). The organization is at the center of an ongoing investigation which spawned from a 2019 email sent by Bill Starnes.

In an email to his Confederate colleagues, Starnes wrote, "We have men there. We can immediately provide them with funds to get the right folks in office." He also encouraged members of the organization to become actively involved in the political movement that aligns with their beliefs.

For more than a decade, the SCV has had the benefit of being classified under the 501(c)(3) status with the U.S. Internal Revenue Service (IRS). Since the organization is classified as a charitable organization, they have been able to dodge federal, local, or property taxes that for-profit businesses are typically faced with.

However, there is just one catch: the IRS prohibits such organizations from "directly or indirectly participating in" political campaigns, which is why Starnes and the organization are being investigated.

The organization reportedly began making sizable donations to the NC Heritage PAC, a pro-Republican fundraising platform that Starnes and other N.C. SCV leaders had been spearheading for years. With the donation approach the PAC has taken, they've managed to funnel campaign funds to Republican candidates while making it seem as if the SCV has no ties to the money.

In a nutshell, financial contributions were made to Republican candidates "in the name of another," which classifies as a Class II misdemeanor, according to John Wallace, former Assistant Attorney General in the N.C. Department of Justice's Antitrust Division.

"The Heritage PAC took a new funding approach that dodged any mention of the N.C. SCV in its future disclosures: gathering mass donations from within the statewide SCV chapter, getting hundreds of mostly-unwitting members to claim slices of the money, and pumping each slice into the Heritage PAC as an individual contribution, disconnected from the SCV.

The strategy is akin to one faucet pumping a single stream of water into, say, 150 different filters that all lead into the same cup. In this case, the faucet water is the N.C. SCV's money, the filters are N.C. SCV members laundering the money, and the all-encompassing cup beneath them is the Heritage PAC."

The group's future remains uncertain due to the ongoing investigation.