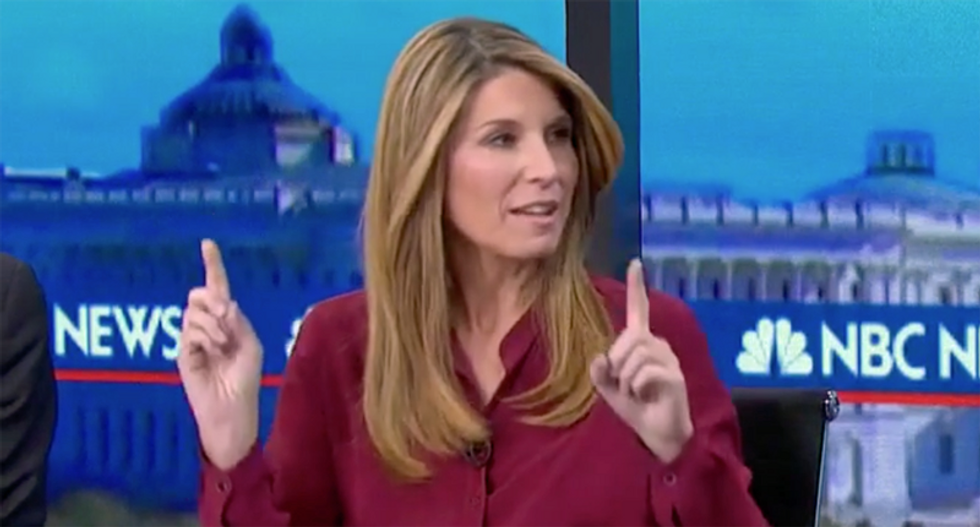 MSNBC host Nicolle Wallace blasted President Donald Trump for not caring about his staff much less "his own godd*mn supporters."

Speaking with conservative Charlie Sykes and Democratic strategist Basil Smikle, Wallace showed a new Lincoln Project ad with Sam Elliott about fathers and sons and what it means to be a "man of family and faith."

"Above all they taught us to own up to it when we did something wrong," the ad says before showing a video of Trump saying he doesn't accept responsibility for the failures of the coronavirus.

The ad comes just as Trump all and right-wing activist John Cardillo, formerly of the New York Police Department, posted a photo of Biden and his last-surviving son Hunter embracing and asking if it was "appropriate father-son behavior." The largely unknown Trump supporter was destroyed on Twitter by people talking about the love that parents have for their children regardless of how old they get. The Biden family, in particular, has experienced such a huge amount of loss and tragedy in their lives, which can bring families even closer together.

Smikle agreed with Wallace that the ad addresses Trump's need to weaponize "hyper-masculinity."

"You see that in his speeches," Smikle said of Trump. "You see that at his rallies. In many ways, it drives wedges within families. It's an intergenerational wedge. You hear so many young people talk about how they don't understand their parents and the decisions they're making around this election. It's a great way to tie in family and go back to some of the themes of empathy that Joe Biden has struck so many times. I think it also pairs well with the Barack Obama speech that we just heard and the clips you just showed in that I think in many ways Obama's speech was targeted to young people as well to say let's bring in coalition back together. Remember when you took your parents to vote for me? I need you to be out there and convince those folks that voted for Donald Trump to make a different decision this time."

Wallace wondered what Trump's strategy is and the idea of attacking Biden's only surviving son as part of a campaign message.

"I want to show you what Cindy McCain has to say, she seems to be on this message too," Wallace said, noting that because there are so few undecided voters, Trump's only real move is to take away Biden voters. "It's a different kind of appeal. I wonder if you think in any universe if you're trying to take someone who is choosing Biden, do you get them by smearing Biden's surviving son?"

Sykes agreed that it was absurd and a terrible strategy.

"A lot of this is an expression of the bubble that Donald Trump has created for himself," said Sykes. "To this point about masculinity, empathy is manly. Being willing the admit you were wrong is manly. Being a loving father is manly. It's good to take that back because I think one of the difficulties of this era is raising young men in an era of Trump and saying that's not what a man is."

Wallace paused him, noting that his passion for raising strong yet caring young men was making her cry. Wallace has a young son at home.

"Well, I mean, I think this strutting-bully image -- Basil said the hyper-masculinity, that image of cruelty, of never admitting you're in error, that's not what being a man is all about," said Sykes. "A man is about integrity, about being a good father, about being responsible. It's about being willing to apologize, all those things. In Trump world, the relationship that Vice President Biden has with his sons is seen somehow as a weakness, as a vulnerability. I think a lot of people look at that and say that's a sign of strength. We all wish we had a father like that. We wish that we were fathers like that and had that relationship with our sons."

He anticipated that what will be seen during the debates is this kind of attack on Biden's children and for people who aren't surrounded by right-wing news on Fox all day, it won't go over well.

"People are going to be saying 'why aren't you talk about health care and the economy?'" said Sykes. "I think that Joe Biden stands there and says, 'Look, I love my son. My son has had difficult times. I'll stand by my son. What you're seeing here is an expression of a president who feels that the only way he can be re-elected is to attack my family.' I really honestly cannot see how that changes the dynamic of this campaign."

Wallace said that it's become clear that Trump is so obsessed with being manly, but the manly things he should be doing are things like protecting the country, putting people first, ensuring his staff and family are protected from the coronavirus.

"The most manly thing to do is to protect," she explained. "The most deadly failure on Trump right now is the failure and refusal to even try to protect his family, his adviser Chris Christie, Bill Stepien, Kellyanne Conway, Hope Hicks, his military aides, his resident staff, his flight attendants, his pilots on Air Force One and his own godd*mn supporters!"

See the full segment below: