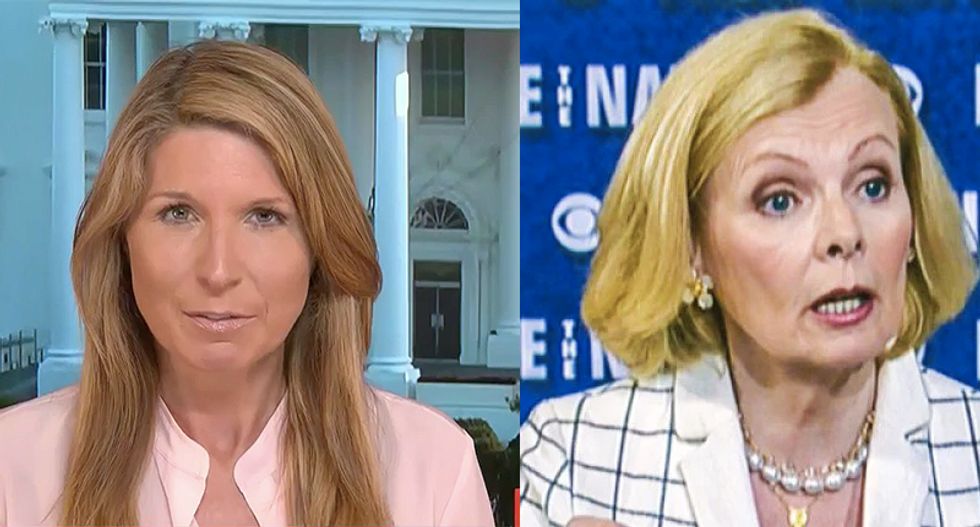 "She's facing the kind of criticism that's going to sound familiar to a lot of women," said MSNBC host Nicolle Wallace. "In a column in the Wall Street Journal, Peggy Noonan writes this: 'For her part, vice presidential nominee Kamala Harris is -- when on the trail -- giddy. She's dancing with drum lines and beginning rallies with 'what's up, Florida!' She's throwing her head back, and laughing a loud laugh, especially when nobody said anything was funny. She's the younger candidate going for the younger vote and happy warrior vibe but coming across as insubstantial, frivolous."

Wallace noted that Noonan ignored Trump's bizarre dancing at his rallies and inappropriate behavior. Welcoming Harris chief Karine Jean-Pierre, the host noted that it caused her physical pain to read it from Noonan because she's been someone Wallace admired for a long time as a woman and as a Republican.

"I don't just admire -- I revere her word," a disappointed Wallace said. "Some of the speeches she's written I have devoted to memory. So, to hear her take out her very skilled cudgel and smash it against a woman who has broken the kind of barriers that every one of us has faced, Peggy, too, is searing for me."

Jean-Pierre noted the "60 Minutes" segment that Wallace showed as the source of the accusation that Harris laughed at something that wasn't funny. Indeed, it was funny, in that it was a bizarre question to come after Harris' profound answer about providing a different perspective to Biden should he be elected.

"I will always share with him my lived experience," she said. CBS News reporter Norah O'Donnell followed by asking if that was a "socialist perspective." Harris appeared to think O'Donnell was joking. Harris explained that her experience comes from being a Black woman who grew up in Oakland, became a prosecutor, an attorney general and a senator.

"Here is the other piece," Wallace explained. "And I don't know if right-wing Twitter could handle this; I'll give them a second to get fingers ready. When you're a white woman and Republican, there is certain stuff culturally that you don't know jack bleep about. And what is that line about dancing to a drumbeat? This felt tone-deaf and nasty, and it felt personal, and it felt bitchy."

Former Sen. Claire McCaskill (D-MO) agreed, noting that she's never been more disappointed by a woman than she was with Peggy Noonan's piece.

Watch the full discussions below: