'Obviously not true': Eric Trump gets shot down on ABC after claiming 'vaccine' cured Trump of COVID 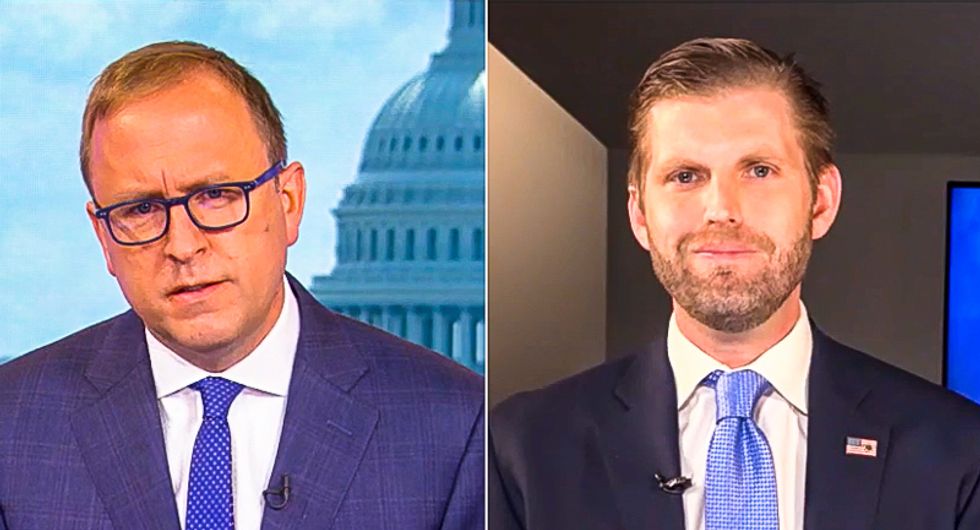 Eric Trump on Sunday claimed that his father received a "vaccine" for COVID-19 after being infected with the virus.

The son of the president made the remarks on ABC's This Week program.

"Let me ask you, on your father's condition, when he spoke to Rush Limbaugh, he suggested there was a moment, a time when he thought he might not make it," ABC's Jonathan Karl told the younger Trump. "How bad did it get?"

"Yeah, listen, that first day he got hit hard," Trump replied. "I can tell you as a son. It's never fun watching your father fly up to Walter Reed on Marine One, right? That's a day that no son wants remember."

"I spoke to him three times that next Saturday, and the guy sounded 100%," he continued. "I'll tell you, it was amazing. It actually probably goes to speak to how good some of these vaccines are being created are."

"Can you clarify that?" Karl asked. "You say your father just took a vaccine?"

"Meaning, when he was in Walter Reed," Trump responded. "The medicines that he was taking."

"I think it goes to show the power of medicine in this country and how far we've come on COVID," Trump opined.

During a panel discussion later in the program, Karl pointed out that Eric Trump's vaccine claims were "obviously not true."