‘Off to a hateful start’: Lindsey Graham bashed for comparing same-sex marriage to polygamy 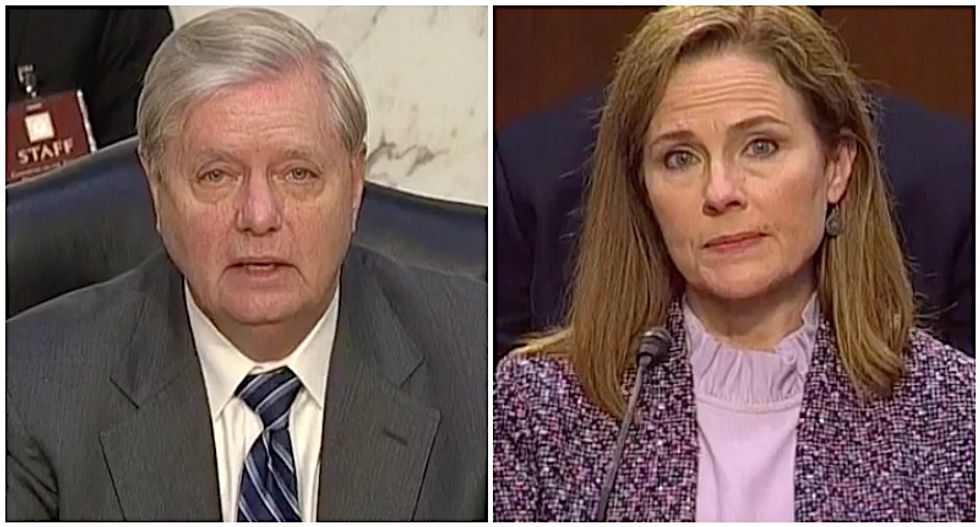 President Donald Trump's nominee to replace Ruth Bader Ginsburg refused to give her opinion on same-sex marriage and other legal topics throughout her confirmation hearings, but she gave her opinion on polygamous relationships.

"Let's see," she said. "That might be a question that could be litigated at, you know -- polygamy obviously in many places is illegal now, but that could be an issue somebody might litigate before the court at some point."

Graham wove an example of such a litigious argument for Barrett to comment on.

"Somebody might make the argument it's possible for three people to love each other genuinely," Graham said, "and that would work its way to the court if somebody wanted to make that argument, is that correct?"

"Yes, somebody could make that argument," Barrett agreed.

Many observers noticed that Barrett and Graham seemed to be comparing same-sex partnerships to polygamous relationships.

Same sex marriage was just brought up in the same breath at polygamy then likened to polyamory. They're coming for… https://t.co/91qGQL1Yjj
— Missy💚💙Nasty Woman (@Missy💚💙Nasty Woman)1602681711.0

Wait so Amy Coney Barrett could speak to whether polygamy is legal but couldn't tell us if the President can legall… https://t.co/AjPAN5hoox
— Adrienne Lawrence (@Adrienne Lawrence)1602681663.0