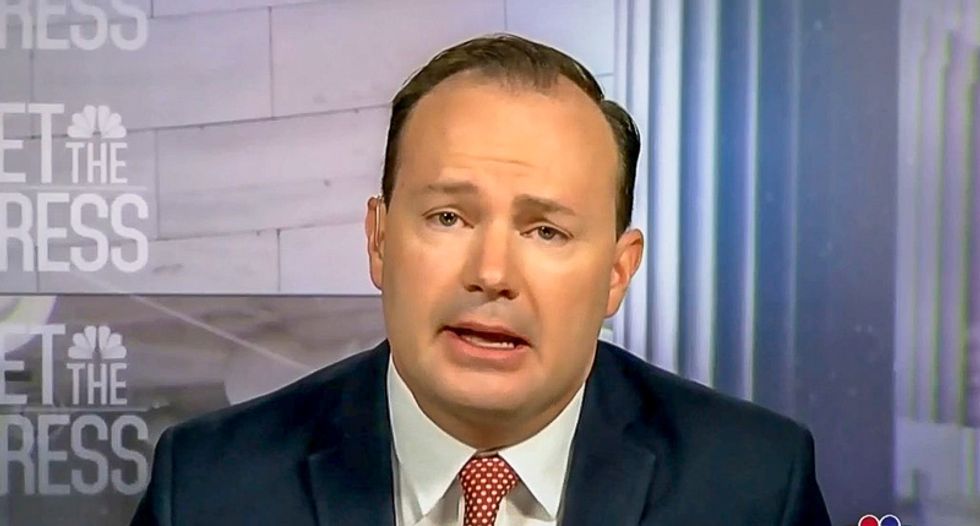 Sen. Mike Lee (R-UT) tweeted out attacks on democratic elections from his self-isolation after testing positive for the coronavirus.

The Utah Republican says he'll return from isolation to vote on the Supreme Court nomination of Amy Coney Barrett for the Nov. 3 election, which he appeared to question repeatedly on Twitter while watching the vice presidential debate.

The word “democracy” appears nowhere in the Constitution, perhaps because our form of government is not a democracy… https://t.co/eMbhysMvgJ
— Mike Lee (@Mike Lee)1602119192.0

Other social media users were alarmed by Lee's remarks.

aside from the obvious problems with this comment, what is the point of making this comment? right at this moment? https://t.co/Bnzv21uSxT
— Josh Marshall (@Josh Marshall)1602160974.0

@SenMikeLee You want Trump to be a dictator & your party to permanently rule. You repeat what an authoritarian thug… https://t.co/MqwkleGFe8
— Stephen Wolf (@Stephen Wolf)1602124396.0

@SenMikeLee REPUBLICS AND DEMOCRACIES AREN'T MUTUALLY EXCLUSIVE. I can't tell if you're just stupid or evil. Probably both.
— Pé (@Pé)1602128683.0

@SenMikeLee @KamalaHarris Such as the Due Process and Equal Protection clause of the 14th amendment, which guarante… https://t.co/9XkcQgCMOf
— PurpleDragon (@PurpleDragon)1602140360.0

@SenMikeLee @KamalaHarris This is deliberately misleading. Our republic is a form of democracy. Sure, the constitut… https://t.co/kFRpGOlqOV
— Cara Heuser (@Cara Heuser)1602159860.0

White guys have been saying some version of this throughout US history and what they mean is that their preferences… https://t.co/Ywci72eIVo
— Don Moynihan (@Don Moynihan)1602159165.0

@SenMikeLee “Democracy is bad actually” is what Republicans have been low key saying for decades with their actions… https://t.co/Ao3BVKBL2G
— Alex Leo (@Alex Leo)1602159322.0

@SenMikeLee We are a Constitutional republic established as a representative democracy. If you intend to replace o… https://t.co/VBkS0Y3oac
— Michael Skotnicki (@Michael Skotnicki)1602144679.0

@SenMikeLee This kind of switch happened to me with a timeshare. That's how they get you.
— pourmecoffee (@pourmecoffee)1602159877.0

@SenMikeLee “Democracy isn’t the objective” They say it out loud so there’s no confusion. Believe what he says. Se… https://t.co/uDKPCaAyxr
— Backlash (@Backlash)1602149358.0