'Steroids and stupidity': MSNBC anchor warns Trump is 'panicking on steroids' as he tanks in the polls 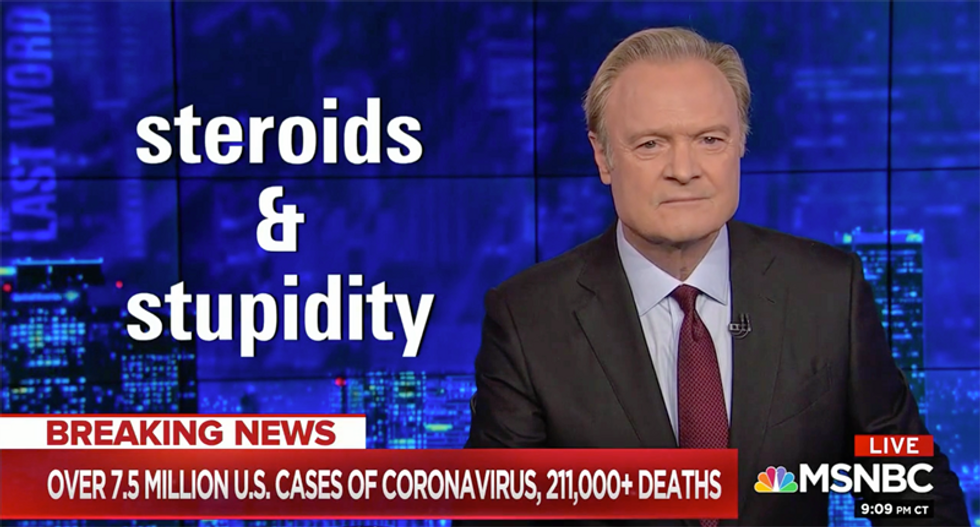 During the handoff between their shows, anchors Rachel Maddow and Lawrence O'Donnell discussed fears over Trump's mental health as he takes powerful steroids after contracting COVID-19.

"I don't usually pay attention to what the president says, just as a matter of course, like I watch what he does, not what he says is kind of my thing, but I am worried about the president's mental state a little bit, and so I've been paying a little more attention than usual to what he's saying and right now his Twitter feed is like a supersoaker of nonsense and it is going off, like, every 30 seconds and he's contradicting himself and things are getting crazy and I just have a feeling this is going to be one of those nights, Lawrence," Maddow explained. "This is going to be one of those nights."

That served as a nice segue, as O'Donnell used the words "steroids & stupidity" as his graphic.

"Well, as Donald Trump's Twitter feed tells us, tonight it is very, very likely that the president of the United States is panicking, and this time he is panicking on steroids," O'Donnell said.

"Donald Trump is confronting two sets of numbers tonight, each of which is enough to panic a person whose physical and mental health we now know to be unstable. the first set of numbers he's been staring at all day are enough to sicken him almost as much as the coronavirus -- the new CNN national presidential poll of likely voters shows Donald Trump falling far behind Joe Biden in a poll completed after America discovered that Donald Trump's irresponsibility has infected him and an increasing number of the White House staff, which tonight includes Stephen Miller with coronavirus," he explained.

"The other set of numbers, which should have Donald Trump in a panic tonight, are the numbers that describe the collapse in the stock market that Donald Trump personally caused today," O'Donnell said.

"Stupidity has left Donald Trump running behind Joe Biden in the polls all year. Polls that are now getting worse and worse for Donald Trump by the day," O'Donnell explained.

"It was nothing but stupidity that led Donald Trump to tweeting this afternoon that he personally has decided to kill coronavirus relief legislation that would deliver desperately-needed financial support to Americans, American voters and American businesses," he noted. "And he issued that tweet an hour before the stock market closed, because of stupidity and that tweet crashed the stock market today."