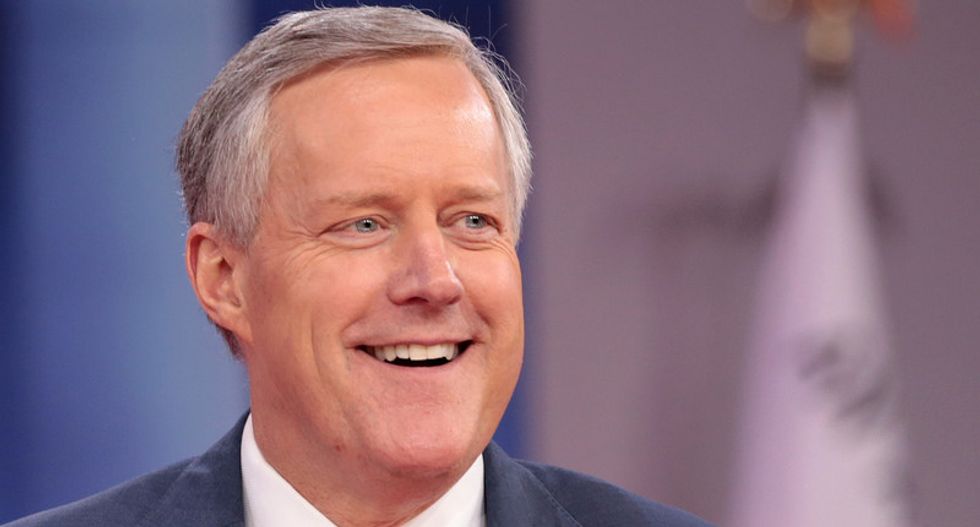 White House chief of staff Mark Meadows publicly confirmed Sunday that Donald Trump had thrown in the towel on stopping the spread of COVID-19. Most people found this odd.

But most people don’t realize how much oddness Mark Meadows brought to the White House when plucked to run the show on March 7. Meadows didn’t learn his wingnut worldview on bended knee before Trump. He brought it with him to the job.

It should not have been shocking that an erstwhile member of the House Freedom Caucus would unleash weirdness as a reality denier. Members of that caucus are the ones other right-wing Republicans try to avoid in the congressional lunchroom.

That opened some eyes, in part because 8.7 million Americans have contracted COVID-19, each with a circle of friends, family and co-workers who have suffered with them. And then there was all that wind power generated by 225,000 dead Americans spinning in their graves about how much of it was avoidable.

This dangerous man has been at the helm of the White House since March 7 when he was named Trump’s fourth chief of staff. That’s pretty heady stuff for someone with no management experience. He was just some real estate guy before entering politics as recently as 2012.

But Meadows had established his credentials for the dual position of presidential poodle over months of performing tricks on Fox News. He was adapted to replace hapless Mick Mulvaney, he of “get over it” gaffe fame from a news conference at which he had inadvertently expedited Trump’s impeachment by copping to the Ukrainian extortion scheme.

But this was no gaffe by Meadows Sunday. This was an act of treachery that could only be delivered with an air of certitude by a man of Meadows’ extraordinary creepiness.

Meadows chilling role behind the curtain was well-documented Monday by the Washington Post. Its reporting described Meadows as the only chief of staff to have connected with Trump as a close personal confidante and soother and as a man who shut down rational voices in Trump’s orbit.

Meadows is described as the first chief of staff to have connected personally with Trump who it reportedly called him 8 to 10 times a day. Under like predecessors, Meadows travels on almost all presidential trips, abides Trump’s Twitter rants and “acts more like a politician than a staffer.”

He earned special favor from the narcissist-in-chief when the president was hospitalized with the fake virus.

“He follows me,” the Post reported Trump saying about Meadows having joined his helicopter ride to Walter Reed National Military Medical Center after testing positive for the coronavirus. “I said, ‘You know what? I just tested positive.’ He didn’t care. He was in that helicopter.”

And there was this: “Meadows slept near Trump at Walter Reed in an ICU bed and largely kept his communication limited to the president rather than talking to other administration officials, the officials said.”

Meadows apparently has a magical touch with Trump, a man whose ideology is based summarized as “me.” Meadows gets that, and apparently feeds the monster of Trump’s psychosis daily, rather than trying to rein in it like his departed predecessors.

So, it has come to pass that so many of the disasters of the past seven months are Meadows’ handiwork. These include, but are not limited to, such tragic photo ops as Trump’s infamous COVID motorcade ride, the stormtrooper sweeping of peaceful protesters to display that upside-down bible at a Washington church, the roller-coaster pandemic messaging and countless other disasters.

But Meadows signature stamp is COVID denial, not all that inconsistent with his past as birther, tea bagger, government-shutdown aficionado and other bizarre House Freedom Caucus priorities that prompted former House Speaker John Boehner to label Meadows “an idiot” in a 2017 exit interview with Vanity Fair.

With all that in mind, consider Sunday’s madness in the context of the Washington Post’s description of Meadows on the pandemic:

“Meadows has long resisted mask-wearing and other coronavirus precautions recommended by the Centers for Disease Control and Prevention and has been more focused on economic rather than public-health issues, telling others that his work on keeping the economy afloat was the most challenging of his tenure. Earlier this year, aides say, Meadows tried to move the president’s schedule away from the coronavirus and “move on,” in the words of a senior administration official with direct knowledge of internal discussions. He has not usually attended meetings of the coronavirus task force, officials said, and has battled with infectious-disease director Anthony S. Fauci and other administration scientists.

“Meadows has encouraged large campaign events and has not forced staff to follow all CDC guidelines, leaving some allies, such as Scott Gottlieb, the former FDA commissioner, saying that the chief of staff should have done more to protect the president.

“He also has helped empower Scott Atlas, a Fox News commentator and radiologist who espouses disputed theories, in the West Wing.”

So, the next time Mark Meadows takes the stage as an enabler of Trump’s madness, consider this: He has brought plenty of his own to the party. Don’t sell his derangement short.