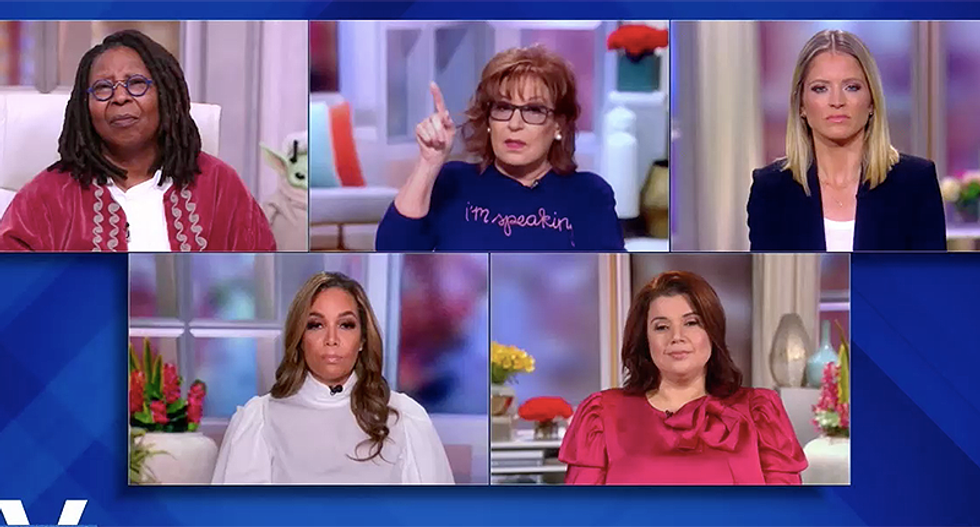 The White House can't control the COVID-19 pandemic in their own building, and chief of staff Mark Meadows revealed that they never really even tried.

It was an admission that Meadows accidentally made Sunday to CNN's Jake Tapper when he said it was "contagious" and there was nothing they could do. He then attacked former Vice President Joe Biden for "waving the white mask" to coronavirus. Biden is the only candidate with an actual plan to flatten the curve and work on stopping the spread of the virus, while the White House confessed it already gave up.

"I mean, is this news to anybody?" asked Whoopi Goldberg. "Do you think he should maybe wait until he can figure out something better to say, Joy?"

"Well, that would be nice, but he can't -- they can't figure anything out," said co-host Joy Behar. "What is he saying? That there is no leadership and we're completely incompetent, you know, they don't have a plan for anything. They don't have a plan for these kids at the border to be reunited with their families. They have no plan for the climate. They keep talking about the economy, how great it is. Well, why hasn't this administration figured out that when you correct the coronavirus and get the numbers down, then the economy will improve? They can't seem to put two thoughts together, you know, and they could have done a lot."

She called it a tragedy and noted that the White House had so much power to do so many things, but it is clear they failed and they continue to fail.

"I mean, he could have considered himself a wartime president, put in mask mandates, put in social distancing mandates because if there were a real war which i feel we're at war with this virus, that's what he would have done, and Americans would have stepped up and done what they told you to do, the way FDR had certain things in place back in the day," Behar continued. "Instead, he lies to the American people. He discourages people from wearing masks. He calls the scientists a bunch of idiots and now they're waiting for a vaccine from the exact people that they called idiots. They are totally incompetent."

She said what bothers her the most is that Trump supporters are well aware of Trump's incompetency and that he has no plan for any policy. She asked why they're continuing to support him because he's never done anything for them.

Goldberg asked Republican consultant Ana Navarro if whatever plan the Trump team seems to have is working for them or if they should just stop talking about it.

"Look, I don't know how they stop talking about it when you see the spikes that we were seeing throughout the country," Navarro said. "There are states that are seeing their highest numbers ever, and so the questions are not going to stop. Until the virus stops, until the deaths stop, until the hospitalizations stop. The questions are not going to stop. In Washington, a mistake, a faux pas is when somebody mistakenly says the truth, and Mark Meadows said the truth. Just look at it. They can't control it within the West Wing of the White House much less in the country. But it's crazy and, you know, it's mixed messages when you have got Trump, on the other hand, saying we're rounding the corner. We're rounding the curve. I don't know what curve he's talking about. Dead man's curve apparently!"

But with eight days until the end of the election, they don't have any other options because half of the Trump team is missing in action because they have COVID-19.

Goldberg closed by asking where Dr. Anthony Fauci is and why he's nowhere to be found.