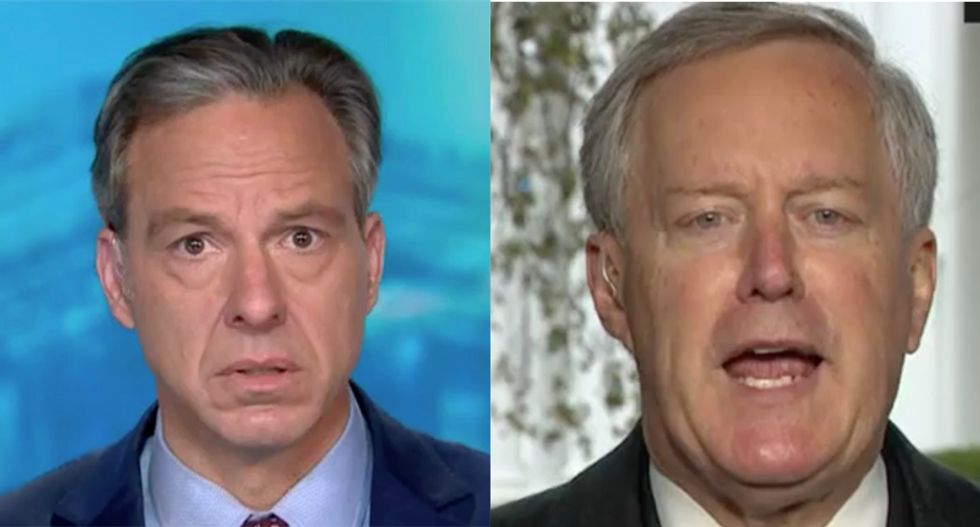 During a long and very contentious interview with White House chief of staff Mark Meadows, CNN "State of the Union" host Jake Tapper snapped back at Donald Trump's righthand man for trying to mock him for not wearing a mask during the interview where Meadows was not in the studio.

After grilling Meadows for agreeing to designate Vice President Mike Pence as an "essential worker" so he can continue to campaign for Donald Trump after his office became a COVID-19 hotspot, the CNN host pressed Meadows why the president continues to refuse to wear a mask and doesn't demand it of his rallygoers.

"Jake. when you look at that, under Joe Biden's America, he would lock everything down," Meadows insisted.

"That's not true," Tapper shot back.

Moving on, Tapper asked, "Should the American people abide by CDC guidelines? You're not even asking your supporters to wear masks."

"We pass them out, Jake," came the reply, with Tapper pressing, "Do you know how many people in Minnesota have gotten a virus because of a Trump rally?"

"You come with us to a rally with us," Meadows replied. "We'll show you, we give out masks."

"They don't wear them," the CNN host shot back.

"Well, it's a free society," the White House official attempted. "You're not wearing one right now, Jake."

"So you're saying you always wear a mask?" Meadows accused. "Wherever you go? Come on, Jake, the American people know that is not true. I know it's not true."

"I wear a mask except when I'm in here and my office and home," Tapper fired back. "That is true -- 100 percent. I wear a mask when I walk in the hallway at CNN. Okay?"