'This is fascism': Trump riles up Minnesota supporters with racist attack on Somali refugees 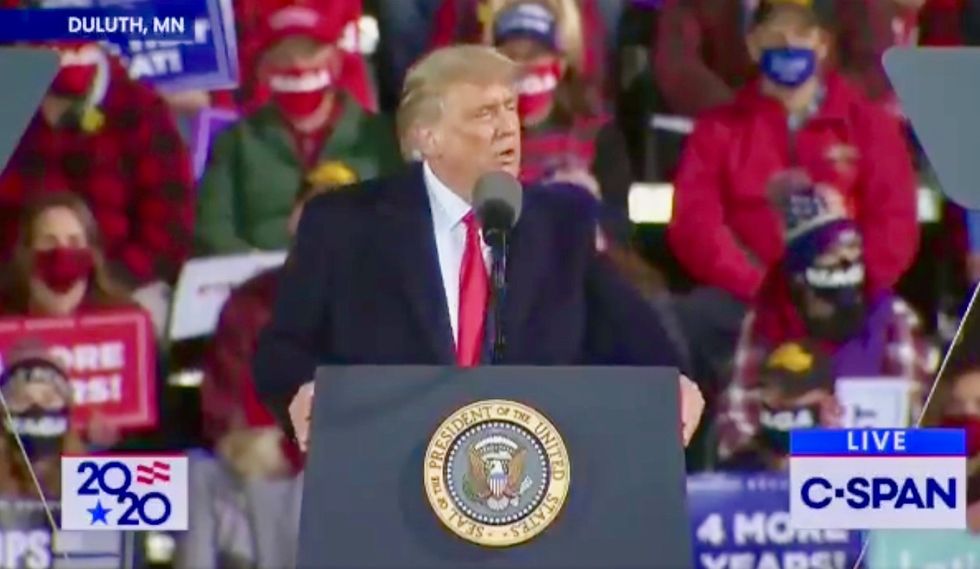 Just 24 hours after refusing to condemn white supremacists during the first 2020 general election debate, President Donald Trump late Wednesday launched a racist attack on refugees from Somalia and other nations and parroted an unfounded right-wing claim about Rep. Ilhan Omar, sparking "lock her up!" chants from his Minnesota supporters.

"Another massive issue for Minnesota is the election of Joe Biden's plan to inundate your state with a historic flood of refugees," Trump said to boos from the crowd gathered at Duluth International Airport. "Coming from the most dangerous places in the world including Yemen, Syria, and your favorite country, Somalia. Right? You love Somalia... Biden will turn Minnesota into a refugee camp."

In the middle of his xenophobic rant against refugees—which the president has made central to his Minnesota stump speech in recent weeks, given the state's large Somali population—Trump veered into an attack on Omar, who is herself a Somali refugee.

"And what about Omar, where she gets caught harvesting?" Trump said, referring to a video released Sunday by Project Veritas, a right-wing group that is notorious for spreading deceptive footage purporting to expose Democratic lawmakers and organizations. The video Project Veritas unveiled Sunday—shortly after the New York Times published its bombshell report on the president's tax returns—was described by researchers as "a great example of what a coordinated disinformation campaign looks like."

"This is the overlap between white supremacy, the climate emergency, misogyny, and human rights abuses," tweeted meteorologist Eric Holthaus in response to Trump's latest attack on refugees. "This is fascism."

Journalist Matt O'Brien echoed Holthaus' characterization of the president's rally Wednesday night as fascistic. "Demonizing refugees, attacking political opponents based on race, the crowd cheering for those opponents to be locked up," O'Brien wrote, listing just some of the alarming components of the president's event.

Trump's Duluth campaign rally came after the president officially and unlawfully missed the deadline to establish the number of refugees who will be allowed into the United States in fiscal year 2021, effectively bringing the nation's refugee admissions to a standstill.

"For the third year in a row, this administration is in violation of the immigration laws, specifically the refugee program requirements added by the Refugee Act of 1980," Reps. Jerry Nadler (D-N.Y.) and Zoe Lofgren (D-Calif.) said in a statement Wednesday. "This president has shown on countless occasions that he believes he is above the law. This time, refugees—including many who served alongside our troops—will be the victims of the Trump administration's lawless approach."

"The administration's violations," the lawmakers warned, "will bring our refugee admissions program to a halt, leaving thousands stranded abroad with their lives at risk."

In a tweet late Wednesday, Omar said the U.S. refugee program "is a life or death matter to millions of children around the world."

"I know because I was one of them," Omar added.