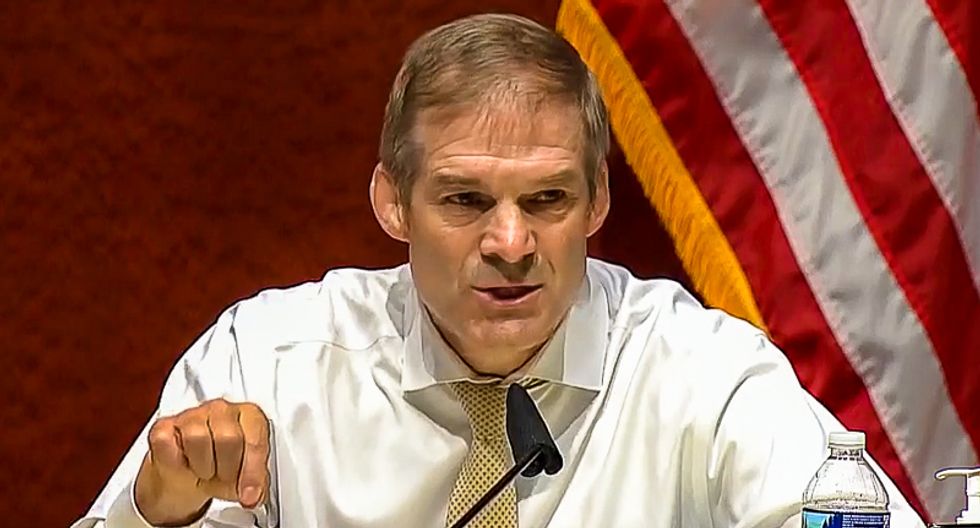 Top Republicans are lashing out at Facebook and Twitter — and even calling for legal retaliation against the social media platforms — after the two companies decided to limit the spread of a dubious New York Post story about the Democratic presidential nominee, former Vice President Joe Biden.

The Post article suggested Biden and his son behaved improperly with a Ukrainian business leader, but has been criticized for lacking proof for its assertions and for relying on questionable sources.

"Twitter is attempting to meddle in the election with anti-conservative bias," Rep. Ken Buck, a Republican from Colorado, posted on Twitter. "@jack is acting like a publisher, making the case yet again to reform Section 230."

Buck's views were echoed by another Republican congressman, Rep. Jim Jordan of Ohio, who tweeted that "big Tech claims they aren't biased against Conservatives. So why are they suppressing speech to help the Democrats? Section 230!"

President Donald Trump lashed out against Facebook and Twitter on the latter platform. "So terrible that Facebook and Twitter took down the story of "Smoking Gun" emails related to Sleepy Joe Biden and his son, Hunter, in the @NYPost. It is only the beginning for them. There is nothing worse than a corrupt politician. REPEAL SECTION 230," he wrote. In later tweets, the president posted two subsequent video clips from Fox News related to the Post story.

Trump has previously been at the forefront of conservatives threatening to revise Section 230 as a way of punishing social media platforms that they perceive as hostile to right-wing views. His efforts have been condemned by legal experts, with Harvard Law professor Laurence Tribe telling Salon by email in May that "the threat by Donald Trump to shut down social media platforms that he finds objectionable is a dangerous overreaction by a thin-skinned president. Any such move would be blatantly unconstitutional under the First Amendment."

Rick Hasen, a law professor at the University of California–Irvine, expressed the same view, emailing Salon at the time that "Twitter is a private company and it is entitled to include or exclude people as it sees fit. And if Trump tries to bring DOJ forces against social media companies (perhaps raising antitrust concerns) but does so for partisan reasons, then Trump would be violating the First Amendment."

Supreme Court Justice Clarence Thomas suggested a different reading of the law, writing on Tuesday that "extending §230 immunity beyond the natural reading of the text can have serious consequences," that it would "behoove" judges to consider narrowing the law's scope and arguing that internet companies had benefited from "sweeping protections" beyond what the law intended.

"While I will intentionally not link to the New York Post, I want be clear that this story is eligible to be fact checked by Facebook's third-party fact checking partners. In the meantime, we are reducing its distribution on our platform," Facebook spokesman Andy Stone tweeted on Wednesday. "This is part of our standard process to reduce the spread of misinformation. We temporarily reduce distribution pending fact-checker review."

Twitter outright blocked the story, with CNBC reporting that the company felt the story lacked "authoritative reporting around the origins of the information in it." The company also claimed that the story violates its Hacked Material Policy, which does not "permit the use of our services to directly distribute content obtained through hacking that contains private information, may put people in physical harm or danger, or contains trade secrets."

The story, which claimed to have unearthed "smoking gun" emails about the relationship between Biden, his son Hunter and a Ukrainian energy executive, has sparked questions over its veracity because it does not prove that the former vice president talked with the businessman in question and includes evidence allegedly obtained by a laptop repair store owner and presented to the lawyer of former New York City Mayor Rudy Giuliani.

Giuliani has served as Trump's "personal lawyer," and the Post is a notoriously right-wing publication and a sister company to Fox News parent Fox Corporation. The Trump campaign and the president himself have tried on previous occasions to smear the Bidens by falsely accusing them of behaving illegally in Ukraine, a smear campaign that culminated in the president's impeachment earlier this year.

Andrew Bates, a Biden campaign spokesperson, made a statement addressing the odd journalistic inconsistencies in the Post's reporting:

Investigations by the press, during impeachment, and even by two Republican-led Senate committees whose work was decried as 'not legitimate' and political by a GOP colleague have all reached the same conclusion: that Joe Biden carried out official U.S. policy toward Ukraine and engaged in no wrongdoing. Trump Administration officials have attested to these facts under oath.

The New York Post never asked the Biden campaign about the critical elements of this story. They certainly never raised that Rudy Giuliani - whose discredited conspiracy theories and alliance with figures connected to Russian intelligence have been widely reported - claimed to have such materials. Moreover, we have reviewed Joe Biden's official schedules from the time and no meeting, as alleged by the New York Post, ever took place.

"The conservative New York Post has a credulous account of how Rudy came across these emails," commentator Jonathan Chait wrote in New York Magazine. "The Post claims somebody brought the computer to a repair shop in Delaware, but then never bothered to pay for the repair. The shop owner saw that the computer had a sticker for the Beau Biden Foundation. But instead of returning the computer to the Biden family, he made a copy of the hard drive and gave it to Rudy Giuliani's lawyer, before turning it over to the FBI."

This is not the first time that the two social media platforms have attracted controversy for their role in controlling the flow of information — or misinformation. Facebook has previously been criticized for not doing enough to crack down on right-wing misinformation. Recently, perhaps in response, the company banned QAnon Facebook groups, Holocaust denial groups and anti-vaccine advertisements.

Twitter stoked Trump's wrath in May when it fact-checked two of his tweets, prompting him to threaten that he would "strongly regulate" or "close" down social media platforms that "totally silence conservatives voices." Later that month he signed an executive order that ordered the Federal Communications Commission to examine exempting social media platforms from Section 230 protections.