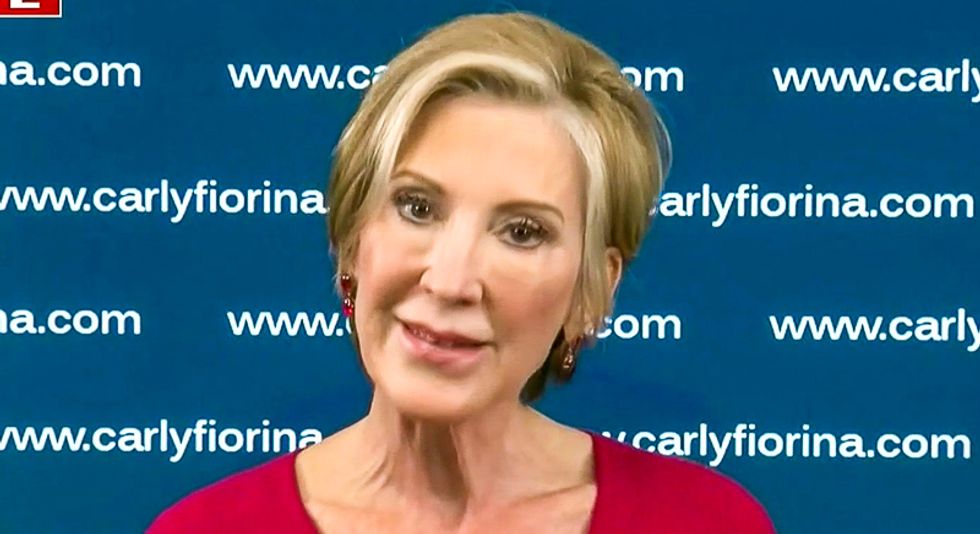 In an interview on Fox News, Fiorina said that she is just one of many Republican women who are voting for Biden.

"In my view, President Trump has failed in his leadership," Fiorina told Fox News host Sandra Smith. "I think Donald Trump has a spotty record of speaking the truth about this virus and acting on the truth."

"I'm not a Democrat," Fiorina said. "But presidential elections are a binary choice between two people. Donald Trump and Joe Biden, in this case. And in this case, I believe Joe Biden through his lifetime has demonstrated the ability to collaborate... He's demonstrated that he is both humble and empathetic, characteristics that are critical to leadership, particularly leaders who know their job is to serve others."

Fiorina's appearance was followed by dozens of tweets from Trump fans who disagreed, who were quickly mocked by Biden supporters.

The hate for Trump is stronger than the Love of America! Fiorina supports Biden!
— deborah blom (@deborah blom) 1602082626.0

Carly Fiorina wants to get back into Silicone Valley so bad. She thinks opposing @realDonaldTrump publicly will be… https://t.co/XvDKHdy08q
— Right In Illinois (@Right In Illinois) 1602084231.0

Wow, Trump supporters sure are salty over Carly Fiorina this morning. The idea that a Republican would dare speak o… https://t.co/vu5jfSGbdN
— Monty (@Monty) 1602084404.0

Carly Fiorina has endorsed Biden for President. #MAGAts are furious everyone is abandoning the orange, fascist, tre… https://t.co/QO00umiVvM
— imfabulous (@imfabulous) 1602084475.0

Carly Fiorina is a complete fool and turn-coat against the US. She is without good judgement and is against Preside… https://t.co/cEBkbNxswR
— Tricia Erickson (@Tricia Erickson) 1602084607.0

.@SandraSmithFox Maybe you should consider what your dwindling # of viewers think of your messaging about the Pre… https://t.co/k4uxwYzZji
— Connie Brimmer (@Connie Brimmer) 1602084673.0

Well at least @FoxNews won't give a platform to totally irrelevant Carly Fiorina and her pathetic attempts to expla… https://t.co/KAgBWAlFuf
— Matthew A. Duda (@Matthew A. Duda) 1602084835.0