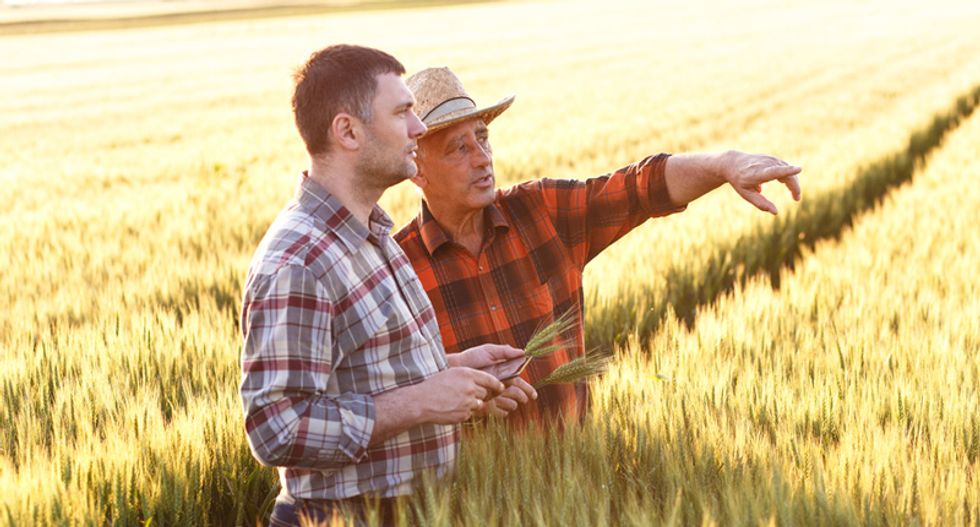 President Donald Trump is continuing to try and funnel money to rural America and to farmers as the election approaches.

During Trump's trade wars, farmers and manufacturing took a brunt of the hit. As the administration continued it's war on the Affordable Care Act, funding to rural hospitals dried up and they began to close. Funding cuts to the Postal Service means rural post offices are also closing. Trump's only option left is to continue flooding farmers with cash in hopes he can buy their loyalty.

"Federal payments to farmers are projected to hit a record $46 billion this year as the White House funnels money to Mr. Trump’s rural base in the South and Midwest ahead of Election Day," the New York Times reported Monday.

The American Farm Bureau calculated debt in the farming sector is expected to increase by 4 percent, reaching a record $434 billion. Farmer bankruptcies have been record-setting as well with another 8 percent increase charted August 2019-2020. As the Wall Street Journal pointed out, throwing money at the problem hasn't stopped the bankrupcies.

"The pandemic has pressured prices for many commodities, squeezing farmers who raise crops and livestock, and prolonging a six-year downturn in the Farm Belt," the Journal explained at the time.

Trump's pledges to save rural America have not only turned out to be another in his line of broken promises.

"Farmers are not the only constituency benefiting from the president’s largess: He has promised $200 prescription drug cards to millions of seniors, approved $13 billion in aid to Puerto Rico, which could help his prospects in Florida, and he directed his Agriculture Department include letters signed by him in millions of food aid boxes that are being distributed to the poor," the Times recalled.

It's remarkably similar to the empty promises Trump made just weeks before the 2018 midterms in which he swore there would be a "middle-class tax cut" after the election. It never came either.

“There are both economic and political motivations for these payments,” said University of Missouri's Patrick Westhoff, who directs the agriculture research center.

Democrats and ethics groups are concerned that the move is another attempt for Trump to bribe voters ahead of an election.

“For the first time in history, a president has repeatedly usurped congressional authority in order to personally dispense tens of billions of dollars in federal farm subsidy payments that would not otherwise have been paid,” said Ken Cook, president of an organization that tracks the spending. “This is an authoritarian power grab used to buy political support from voters who are essential to his re-election.”

Trump has only made it worse, announcing at a Wisconsin campaign rally that he'd be delivering another $13 billion in aid to farmers. Trump even shifted $100 million from an account that barred subsidies to the tobacco industry to a fund that could help prop up the North Carolina industry as it's appearing more and more like a swing state with a crucial Senate election.

The Government Accountability Office also took issue with $14.5 billion in farm aid from 2019 when they published a report in September. They found that the aid was being allocated with politics taken into consideration, with "the bulk of the money went to big farms in the Midwest and southern states, including Mr. Perdue’s home state of Georgia."

Read the full report from the New York Times here.