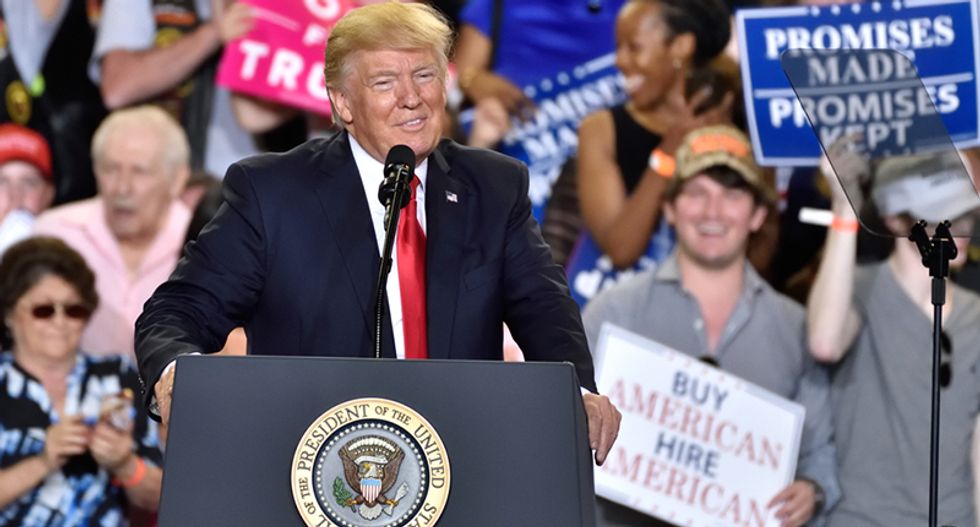 President Donald Trump launched his 2020 campaign Tuesday, touting the campaign slogan "Promises Made, Promises Kept." Unfortunately, for the campaign, they'll likely spend a lot of time swearing that they've been able to accomplish things that quite simply haven't happened. Promises seemed easy for Trump make, but it likely won't be easy to convince Americans he's kept them.

Here's the list of Trump's "Promises Made, Promises Broken":

It's the one issue that Trump could actually get accomplished, but he's refusing to do it. While Americans grapple with tire-bursting potholes and crumbling bridges across the country, the president has put aside his plan to yell at Democrats. During the scheduled meeting, the president spent just three minutes reprimanding them before leaving the room and holding a press conference to tell Americans he’s on strike and nothing will move forward until investigations stop.

2. Mexico will pay for the wall

Trump still hasn't managed to get Mexico to pay for the wall that he still hasn't built. While he might claim that the wall is being built, the fact is that for years the border fence has been being repaired and shored up. Funding for that came from a budget passed during George W. Bush's administration. The president did manage to get a little over $1 billion for the wall, and wasn't able to get much out of it.

Trump claimed that he wouldn't spend all of his time golfing, saying that he probably would have so much to do he wouldn't have time for it. The reality is he's not only had time, but he has also had more time to play golf than any president. According to numbers from the Government Accountability Office, Trump has spent about $105 million on golf outings.

4. "We get rid of Obamacare and we have a great life altogether"

While Trump has been able to chip away at the Affordable Care Act, it's still in place. Republicans have spent nearly a decade campaigning on "repeal and replace Obamacare," but when the moment came, they couldn't repeal and they had no replacement. Given the lack of a replacement, Sen. John McCain (R-AZ) voted it down. He has teased that he'll announce a "New" Obamacare

While the president still likes to attack his former opponent, Hillary Clinton, he still hasn't moved to "lock her up." Doing so, however, would remove his ability to campaign on it.

Allegations began early that Trump was stocking his cabinet with swamp-dwellers. But nearly three years after being elected, Trump has had only added to the swamp. Whatever swamp Trump has drained has been his own appointees.

7. Promising to bring manufacturing jobs back.

While he's managed to bring back some of the manufacturing jobs, they're still not doing much for Americans who lost good union jobs. The folks at the Carrier plant, specifically didn't get help, even after Trump told them to their faces he was saving their jobs.

8. Trump promised to bring back coal.

One of the lies Trump told in 2016 was that he was going to bring back coal. He wasn't the only candidate to give the false hopes to desperate coal miners hoping for jobs. Instead of focusing on retraining and helping people find new jobs, Trump made another empty promise that was broken.

"They get the expansion. We get the joblessness," Trump said in June 2016. "That's the way it works—not going to happen anymore."

Trump has attempted to create a new NAFTA, but most say there's nothing really different from the old NAFTA. Regardless of what it is, it hasn't passed Congress.

Meanwhile, the debate with China has gone nowhere and now it's starting to hurt businesses, and farmers in particular0. When it came to threats to Mexico, the president seemed to cave in, rather than make good on threats to hike up their tariffs.

Trump promised Americans a hefty tax cut. The problem is that his tax cut went to the highest wage earners and corporations, leaving Americans with about $28 more than they made the year previously.

As part of a wonky tax promise, Trump said he would help Americans out with their health care costs.

"Allow individuals to fully deduct health insurance premium payments from their tax returns under the current tax system," he promised. that didn't happen either.

Just before the 2018 election, Trump promised he would give the middle class a tax cut too, but that has proven to be another broken promise too.

Then there are these:

Some on the list warranted more details but here is a chunk of promises that Trump will never have a shot making come true, via PolitiFact.

"If I'm elected president, I will push for a constitutional amendment to impose term limits on all members of Congress."

“One of my first acts as president will be to establish a commission on radical Islam which will include reformist voices in the Muslim community who will hopefully work with us."

"Our elected representatives in the House and Senate must ... block-grant Medicaid to the states. Nearly every state already offers benefits beyond what is required in the current Medicaid structure."

"We will end the sanctuary cities that have resulted in so many needless deaths. Cities that refuse to cooperate with federal authorities will not receive taxpayer dollars, and we will work with Congress to pass legislation to protect those jurisdictions that do assist federal authorities.”

“I'm putting the people on notice that are coming here from Syria, as part of this mass migration, that if I win, if I win, they're going back.”

"Instruct the Treasury Secretary to label China a currency manipulator."

“The events never happened. Never. All of these liars will be sued after the election is over.”

"The Trump plan will rewrite the tax code to allow working parents to deduct from their income taxes child care expenses for up to four children and elderly dependents."

"The Trump Plan will collapse the current seven tax brackets to three brackets."

"The 3.8 percent Obamacare tax on investment income will be repealed, as will the alternative minimum tax."

"As part of this reform, we will eliminate the carried interest deduction and other special interest loopholes that have been so good for Wall Street investors, and for people like me, but unfair to American workers."

"It can be done. ... It will take place and it will go relatively quickly. ... If you have the right people, like, in the agencies and the various people that do the balancing ... you can cut the numbers by two pennies and three pennies and balance a budget quickly and have a stronger and better country."

"President Obama wants to change the name of Mt. McKinley to Denali after more than 100 years. Great insult to Ohio. I will change back!"