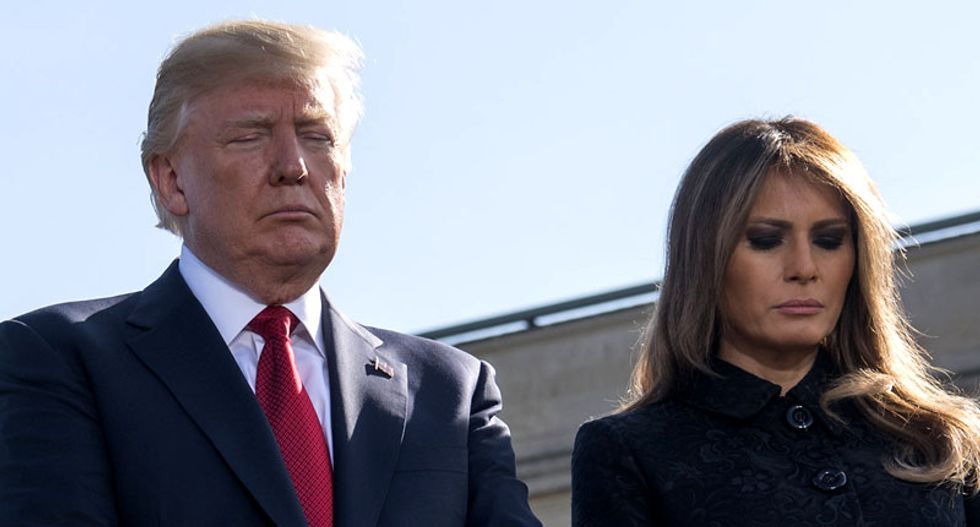 Donald Trump is covering up just how he and 18 White House aides and supporters got the coronavirus, the latest proof that he doesn’t care about you or anyone else.

Instead of shooting someone on Fifth Avenue, spraying lead bullets out of a gun, Trump sprayed the deadly coronavirus with every word coming out of his unmasked mouth.

Among those whose lives are now at risk – the seven children of Judge Amy Coney Barrett, who sat mask-less in the Rose Garden on Sept. 26 when Trump announced their mother was his Supreme Court nominee. As an exercise in atrocious judgment bringing children to a crowded event during a pandemic and not masking them should be enough to establish that Barrett is unfit to sit on any bench.

Trump doesn’t care about the health of the nearly 100 White House servants, many men and women of color, who served loyally one president and his family after another.

Then there's the infected Kellyanne Conway, who said that she quit the White House to be with her troubled teenage daughter.

And what about the 11-month-old baby of Kayleigh McEnany, Trump’s press secretary. She has tested positive after again and again showing her fealty to the imaged great leader by going mask-less. Does anyone doubt that if McEnany were a poor black or brown woman -- or a Jew or Muslim in a Bible Belt county -- that child protective services would be investigating whether to remove the infant Blake for her own safety?

This is what happens when a cult arises. The leader is special and believers most demonstrate without even being asked that the messages the leader conveys have been internalized. And if he uses tricks and deceits to fool the public you must go along to remain in his good graces even if it exposes you and your newborn to sickness, lifelong health problems, and even death.

The reason, rationality, and civil debate envisioned by our Founders and Framers have no place in Trump’s anti-democratic cult. All that matters is loyalty to the leader, a loyalty that runs only one way.

As for lies, it’s hard to top what Trump tweeted Monday before his skillfully timed departure from Walter Reed hospital, a staged event that consumed the entire evening news broadcasts of ABC, CBS, and NBC.

“Don’t be afraid of Covid,” Trump tweeted before the brilliantly staged pageantry began in what may go down as his single most irresponsible advice during the pandemic that has claimed more American lives than combat in World War I, Korea, Vietnam, Afghanistan, and Iraq.

That tweet, the flags and dramatic lighting at the White House as the sun set while Trump, his face and hair professionally pampered, posed triumphantly were all part of a propaganda pageant slicker than any event staged by Il Duce, Adolf or Trump’s personal heroes, Putin and Kim.

When it comes to using images to kill rationality and stir cultish emotions, Trump has outdone even Leni Riefenstahl. Hitler, incidentally, at least had the smidgen of decency to not expose his beloved propaganda filmmaker to the risk of death by virus, as Trump did his photographer and videographer, among others, at the White House Monday evening.

The Trump virus spreading coverup can be seen in the highly restricted contract tracing being undertaken by the White House medical staff. Trump has coronavirus tracers looking only for who was within death shot of his breath, but only since Thursday, Oct. 1.

That’s after the Tuesday night debate in Cleveland where Trump and his family arrived late, were not tested, and sat mask-less. Did they do it because they knew or had reason to suspect that at least one of them was infected? We don’t know because the Trumps aren’t talking about it, but eventually we will find out.

We do know that, so far, Joe Biden and his family have tested negative. Trump’s reckless disregard in exposing Biden to the virus is morally indefensible and verges on the criminal.

And what about Trump’s rally in Duluth on Wednesday where he pumped up a crowd of mask-less fans?

Minnesota Public Health Department officials are telling the 3,000 attendees to self-quarantine if they were near the president. State Sen. Paul Gazelka, the majority leader, State Rep. Kurt Daudt, the House minority leader, are in quarantine. The My Pillow guy, who spoke at the rally, said he was never close to Trump that night.

Three Minnesota Congressmen, Republicans all, flew back to Washington with Trump on Air Force One and then returned to the Gopher state on Delta Airlines in apparent violation of its rules for those exposed to the coronavirus. This is how disregard for the sanctity of human life spreads like waves from a rock dropped in a pond or, worse, that sinks after skipping across the surface like a candidate touching down for campaign rallies.

Oops, not rallies. Trump says his gatherings of fans are better described as protests against mask-wearing.

But he is using his departure from the hospital, no doubt against medical advice, in a crass appeal to raise money while discouraging people from following the well-established science of how to stop spreading the virus, knowledge that dates to the mid 19th Century. 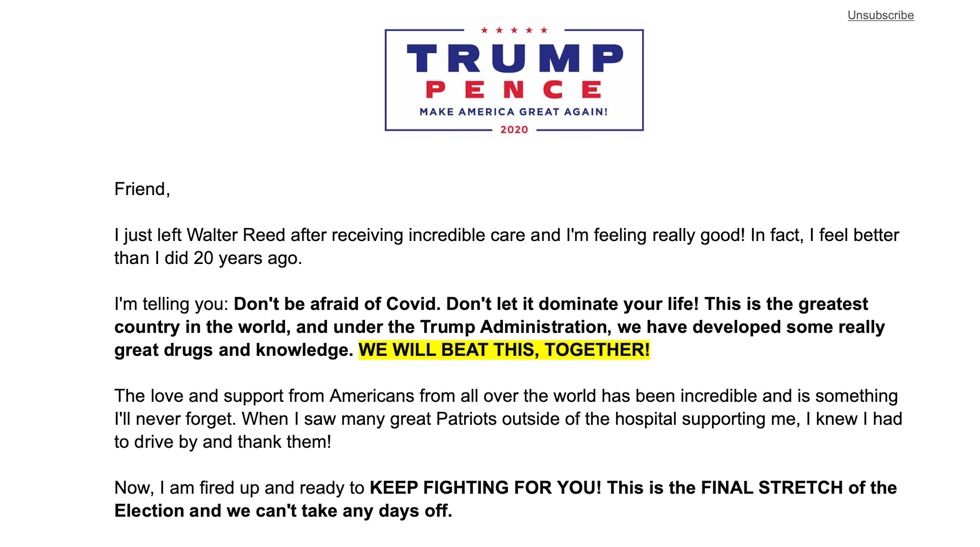 That letter above is the drugs talking. The powerful steroids Trump was given can make you rage with emotions and feel invincible for a time. I know because it happened to me a dozen years ago, a terrible side effect that afflicts some people given steroids for sound medical reasons.

Trump draws crowds because the majority of Americans have real economic grievances, as I’ve written about for decades including these recent DCReport pieces. Indeed, Trump ran for office using many of the phrases he heard me say on television about how Washington policies hurt 90% of Americans.

While he pledged in his inaugural address that “the forgotten men and women of our country will be forgotten no longer” his actions documented by DCReport show that he never gave them a thought.

Trump also pledged that “at the center of this movement is a crucial conviction: that a nation exists to serve its citizens” and “this American carnage stops right here and stops right now.”

Trump doesn’t care about the health of the nearly 100 White House servants, many men and women of color, who served loyally one president and his family after another. He doesn’t care about the Secret Service agents he made ride in an SUV so he could wave at his fans outside the hospital. When each Secret Service agent pledged to forfeit their own life it was to defend a president under assault, not preening for the television cameras. They are to him what you are, not a human being but an object to be used, abused and when convenient cast aside or literally buried.

When he took office, Trump expressed a belief that “we are one nation – and their pain is our pain. Their dreams are our dreams; and their success will be our success. We share one heart, one home, and one glorious destiny.”

Trump’s lack of regard, lack of decency, and rejection of medical science may give us one destiny, but it will be anything but glorious now that coronavirus cases have moved back up to 43,000 a day and rising.

“From this day forward, a new vision will govern our land,” Trump proclaimed when he took office. “From this moment on, it’s going to be America First.”

And it is now first. It's America first in coronavirus deaths, in needless pain,  in unnecessary economic suffering, and especially Trump has made America first unwanted death.