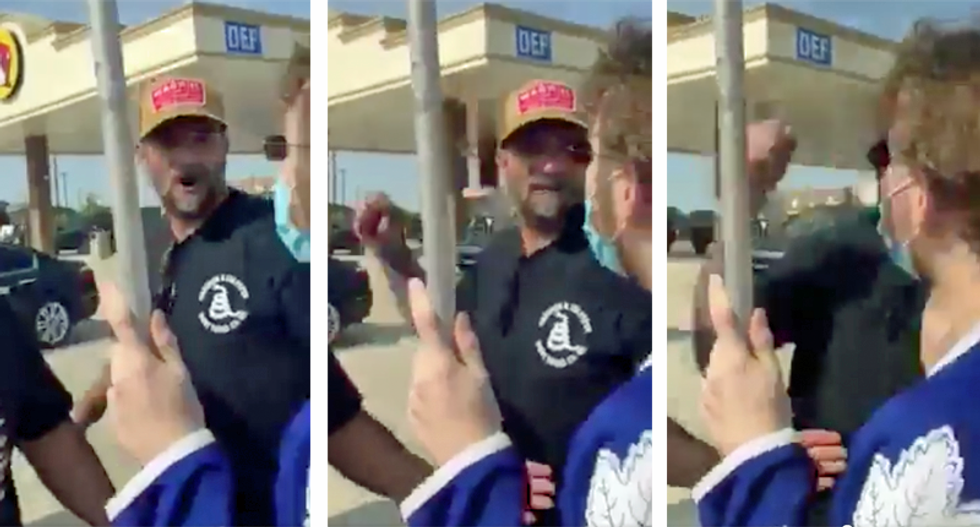 Authorities in Texas are searching for a Trump supporter who was caught on tape punching a man in the face.

In a profane video posted online on Saturday, a man can be seen shouting about masks to a man holding a sign.

"I'll f*cking eat your f*cking face off, motherf*cker," the man shouts. "You want a f*cking piece?"

The man shouts, "I'll f*ck you up" as he cocks his right arm and then punches the man in the face.

After the victim hit the ground, the man who threw the punch can be heard shouting, "Get up motherf*cker!"

The man is now being sought by police for assault.

"We are aware of an assault that occurred at Buccee’s in our city this afternoon. A report has been taken and detectives are conducting an investigation," Denton Police Chief Frank Dixon posted on Twitter, with a request for information.

"The victim told officers that he and a friend observed supporters of President Donald Trump at the location. A verbal argument ensued, and the victim said an unknown male then punched him in the face," Denton Police said in a statement. "Officers observed an abrasion below the victim’s right eyebrow. He also had a broken tooth."

The suspect was reportedly last seen in a dark-colored Dodge Ram.

Because this was one of many meet-up locations in the DFW area, it is unknown at this time if the suspect is from D… https://t.co/hoSKijHynf
— Frank Dixon (@Frank Dixon) 1601761232.0