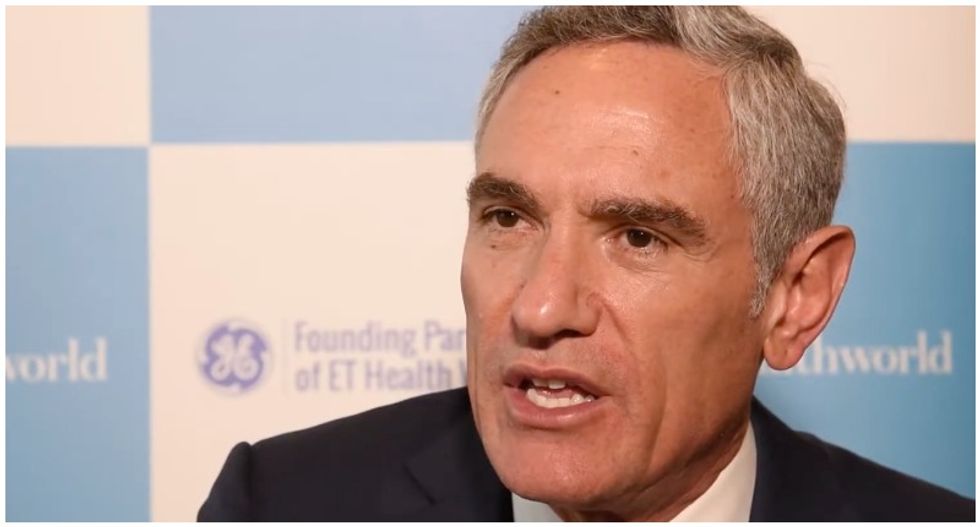 This is not Dr. Scott Atlas’ first rodeo.

It might seem like Atlas came out of nowhere after getting recruited by Stephen Miller at a QAnon meeting. Or you might have him confused with the Atlas who tried to kill Superman in #677 of the superhero series.

Atlas wasn’t famous until he got plucked by Trump from the farthest right reaches of the universe as a pandemic adviser carrying the flag for herd immunity. That, of course, is the theory that says, in effect, that saving the economy in an election year is certainly worth losing a few million lives.

But it turns out Atlas has been on the political scene as a foe of government health care for quite a while. As a creature of the Hoover Institution, a conservative think tank uneasily affiliated with Stanford University, Atlas has left a bit of a paper trail.

In 2008, for example, Atlas was the presidential campaign health adviser for one Rudy Giuliani, the former New York City mayor--since turned vampire--who was running a crowded Republican-primary field that included Governors Mitt Romney and Mike Huckabee and Senator John McCain. Romney’s signature issue was bringing Romneycare, the popular public health-care program he advanced in Massachusetts, to the national scene.

Here’s what Atlas had to say about that:

“Mitt Romney’s legacy is the creation of a multibillion-dollar government health bureaucracy that punishes employers and insists middle income individuals either purchase health insurance or pay for their own health care,” Atlas said to the Associated Press. “The former is a mandate, the latter is a tax, and neither one is free market.”

With Atlas’ assistance, Giuliani finished 8th in a field of 8 that year, the only candidate to stay in the race and receive zero delegates. Romney finished closely behind Huckabee. McCain, of course, won a landslide primary victory, only to lose to President Barack Obama, whose landmark Obamacare was modeled in part after Romneycare.

If that isn’t ironic enough, there’s this: On March 24, 2012, a reinvented Romney proudly announced his team of five healthcare advisers who would help him attack the horrors of the Affordable Care Act. First on the list: Dr. Scott Atlas.

Perhaps that honeymoon didn’t last after Romney went down to defeat in the general election. Atlas, was still snarky about Romneycare in 2014.

Researchers then reported, according to the Boston Globe, “that four years after Romneycare was implemented in 2006, death rates in the state dropped nearly 3 percent among young and middle age adults compared with similar populations in states that didn’t expand coverage.”

Replied Atlas, citing no facts: “I am skeptical that such an immediate and significant drop in mortality would occur after getting health insurance.”

Why, of course you’re skeptical, sir. That’s what has produced descriptions today from the likes of Dr. Robert Redfield, Trump’s director of the Centers for Disease Control and Prevention, who said succinctly “everything (Atlas) says is false.”

On the other hand, that doesn’t keep Atlas’ weirdness from rubbing off on others. At a Senate Health Committee hearing in May, Romney posed the following question, according to the St. George News, of Utah:

“Should we let this run its course through the population and not try to test every person?” Romney asked Dr. Francis Collins, director of the National Institutes of Health. “I’m saying that a bit as a strawman, but I’m interested in your perspective.”

His response was unenthusiastic.

“Collins said the result would not be a disaster when it came to much of the population that is not at high risk of dying from the virus,” the paper reported, “but it could be deadly for the elderly and others with health conditions like asthma, diabetes and heart conditions.”

Deadliness is the sort of thing that troubles the likes of Atlas’ 78 medical faculty colleagues at Stanford University, who issued a statement condemning his idiocy.

“Many of his opinions and statements run counter to established science and, by doing so, undermine public health authorities.” For his part, Atlas brandished his Trumpish credentials by threatening those colleagues with a defamation lawsuit for speaking truth.

In response to that lawsuit, attorneys for the Stanford faculty members said, ““If [Atlas] cannot tolerate science-based criticism of his opinions and statements concerning this public health crisis, then he has no business advising anybody, let alone the President of the United States.”