Trumpworld 'going all in on QAnon' with the election less than 2 weeks away: report 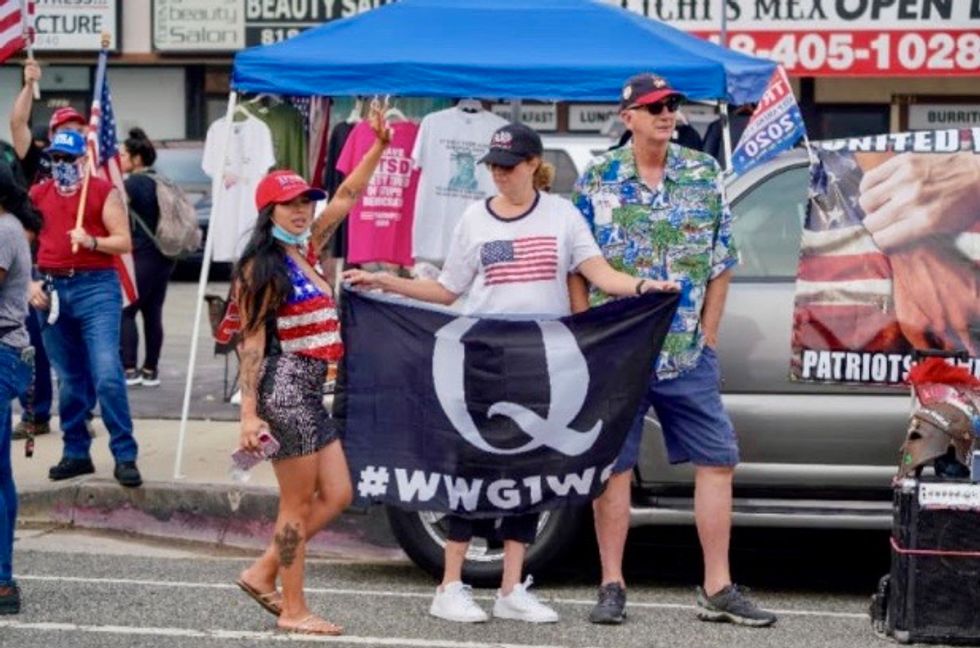 Whenever President Donald Trump is asked about QAnon extremists, he will say a few nice things about them while insisting that he knows very little about the movement. But journalist Will Sommer, in an article published by the Daily Beast on October 22, reports that Trump's allies are trying to use the QAnon conspiracy theory to get him reelected.

To say that QAnon's beliefs are absurd would be an understatement. According to the QAnon conspiracy theory, the U.S. government has been infiltrated by an international cabal of child sex traffickers, pedophiles, Satanists and cannibals — and Trump was put in the White House to combat them. An anonymous figure named Q, according to the theory, is giving them updates on Trump's battle. QAnon also believe that R&B superstar Beyoncé is really an Italian woman named Ann Marie Lastrassi and is working with billionaire George Soros as part of the conspiracy.

But as ridiculous as QAnon's beliefs are, Trump's allies are willing to promote the cult if it will help his reelection campaign. One of those allies, Sommer notes, is former Breitbart News Chairman Steve Bannon, who has been using QAnon-like rhetoric and claiming that at least some of their beliefs are true. Bannon said of QAnon, "How are they not at least — at least an aspect of their argument — at least appears, directionally to be correct?"

Sommer explains, "With less than two weeks before Election Day and Trump lagging in the polls, some of the president's most prominent allies are going all in on QAnon, while Trump and other top supporters refuse to denounce the conspiracy theory. It is, at its most innocent, a crass political calculation designed to keep a relatively modest, though loud and influential, chunk of the party's base engaged. At its worst, critics warn, it's a green light of acceptance to dangerous conspiracy theorists and a normalization of their beliefs."

The Beast reporter goes on to say that Trump has "refused to disavow QAnon, which the FBI considers a potential source of domestic terrorism." And in Georgia, Sommer notes, "Two Republican candidates are competing for their own QAnon endorsements. Sen. Kelly Loeffler (R-GA) touted the backing of Marjorie Taylor Greene, a Georgia Republican and outspoken QAnon supporter who's set to win a House seat in Congress in November. Loeffler's challenger, Rep. Doug Collins (R-GA), meanwhile, rushed out his endorsement from former Trump National Security Adviser Michael Flynn, a hero to QAnon believers who recently took the QAnon oath with members of his family."

Flynn, CNN's Marshall Cohen reported on July 7, posted a video using QAnon rhetoric. In the video, Flynn declared, "Where we go one, we go all" — which is a QAnon slogan.