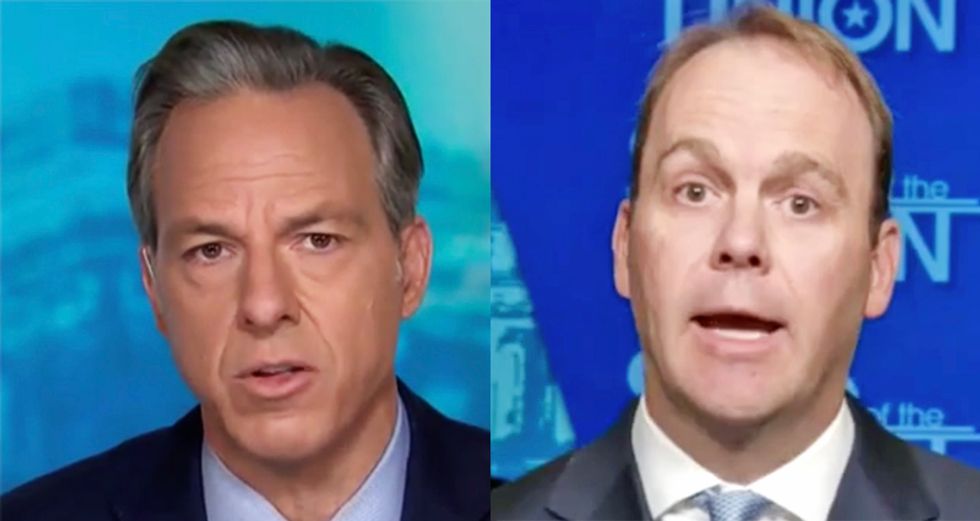 On Sunday morning, CNN "State of the Union" host Jake Tapper put a former Donald Trump campaign official on the spot for giving the Russians internal polling data before the 2016 election and pressed him to explain his actions.

Speaking with Rick Gates, who pleaded guilty to conspiracy against the United States and making false statements about Russian election involvement, Tapper brought up the Russians and how Gates came to be involved with them.

"Obviously, the last few years the Russian investigation and Mueller report and prosecution all of that has been a part of your life," Tapper began. "You deny that there was any conspiracy between the Trump campaign and Russia. Obviously Mueller was not able to find what he thought was prosecutable evidence of conspiracy but you have admitted you repeated shared private Trump internal campaign polling data with your associate Konstantin Kilimnik who we know was a Russian operative -- you've downplayed that."

"I think it's important to make sure we have all of the facts. I know the idea that he has been an operative of the Russian government and gone widely through the media," Gates replied. "I think there another piece to that. Through this investigation and it was very clear through State Department cables, from the U.S. Embassy in Kiev, that he was a high value asset of the United States government and he was providing information to the United States government on a host of information that was coming from Ukraine as well as other countries I'm not aware of."

"That is according to the bipartisan Senate Intelligence Committee -- it's not from Russia," Tapper helpfully added.

'Even if he is a double agent, okay? He is a Russian intelligence operative according to the Senate Intelligence Committee," the CNN host shot back. "My question is you provided him with internal campaign data. What do you think he was doing with it? Obviously the Russian government interfered in the election in 2016. They did through disinformation campaign. Is it not possible that they took the internal campaign data that you provided and used it to interfere in the election?"

"First, let me say about the campaign data -- there has been a lot of misinformation over the last three years about that specific data," Gates parried. "Just to be clear -- for the first time hearing it from me -- that campaign data, in most cases was dated and it was called top-line data. That is simply that it has Trump 50% and Clinton 48%. There was no specific detailed data about any of those polls."

"It was a combination of some internal polling on specific states, as well as a lot of public data that was shared and, in most cases, it was sent several days after the fact," he continued. "That information was given to Konstantin to provide information to people in Ukraine and I was never led to believe it was going to any other people than he specified and I took him at his word for that."