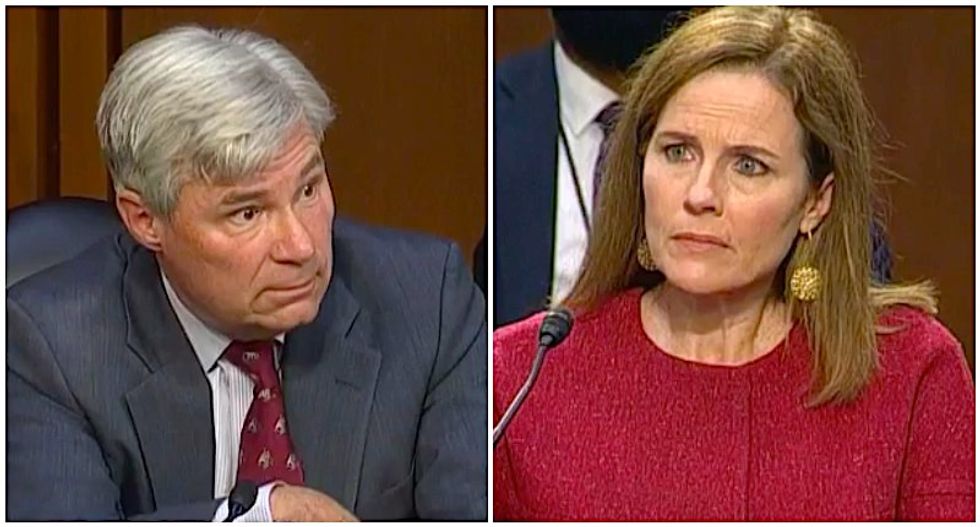 Sen. Sheldon Whitehouse (D-RI) laid out a vast right-wing conspiracy to stack the courts to benefit a handful of billionaires.

The Rhode Island Democrat showed how the deeply conservative Federalist Society, Judicial Crisis Network and Donors Trust spent hundreds of millions of dollars to rig the courts -- and the election map -- in favor of Republicans and their corporate sponsors.

"It's a $250 million dark money operation, [and] $250 million is a lot of money to spend if you aren't getting anything for it," Whitehouse said. "So that raises the question: What are they getting for it?"

Whitehouse pointed out that conservatives had lost on the Affordable Care Act, same-sex marriage and abortions, but he said those losses could be reversed by tipping the courts to the right.

"That's where the contest is," Whitehouse said. "That's where the Republican Party platform tells us to look, at how they want judges to rule to reverse Roe, to reverse the Obamacare cases and to reverse Obergefell and take away gay marriage. That is their stated objective and plan. Why not take them at their word?"

Whitehouse also noticed a certain dynamic in dozens of cases brought before the Roberts Court that Amy Coney Barrett would join as a sixth conservative, if confirmed.

"There's another piece of it, and that is not what's ahead of us but what's behind us," he said. "What's behind us is now 80 cases, Mr. Chairman, 80 cases under Chief Justice [John] Roberts that have these characteristics. One, they were decided 5-4 by a bare majority. Two, the 5-4 majority was partisan in the sense that not one democratic appointee joined the five. I refer to that group as the Roberts five. It changes a little bit as with Justice [Antonin] Scalia's death, for instance, but there's been a steady Roberts five that has delivered now 80 of these decisions."

"The last characteristic of them is that there's an identifiable Republican donor interest in those cases, and in every single case that donor interest won," Whitehouse said. "It was an 80-0, 5-4 partisan rout, ransacking, and it's important to look at where those cases went because they're not about big public issues like getting rid of the Affordable Care Act, undoing Roe v. Wade and undoing same-sex marriage."

Those cases all gave Republicans and their wealthy donors the power to preserve minority rule over a less-conservative majority, Whitehouse said.

"In all these areas where it's about political power for big special interests and people who want to fund campaigns and people who want to get their way through politics without actually showing up, doing it behind Donors Trust and other groups, doing it through these schemes, over and over and over again, you see the same thing -- 80 decisions, Judge Barrett, 80 decisions, and 80-0 sweep."