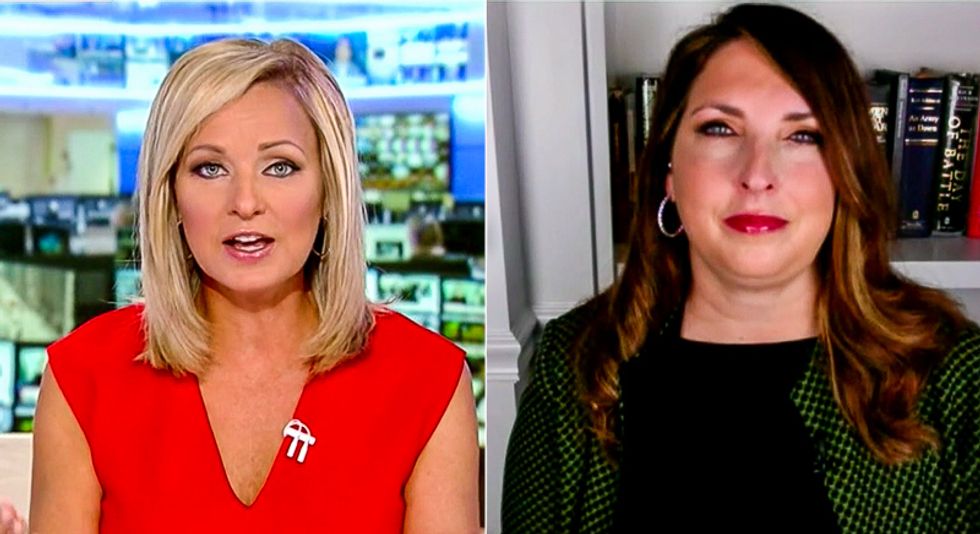 During an interview on Fox News, Smith noted that the Commission on Presidential Debates is considering changing the rules due to the constant interruptions at the first debate between Biden and Trump.

"At any point when you were watching the debate, did you wish that perhaps President Trump didn't jump in there as much as he did?" Smith wondered.

"I actually wanted him to keep asking him about stacking the Supreme Court," McDaniel replied.

"But to that point about the interruptions," Smith interrupted. "Did you ever think, that's too much?"

"Joe Biden was interrupting the president just as much," McDaniel claimed falsely. "It was the back and forth."

"But I'm asking you a question that you're not answering," Smith countered. "Did at any point, did you think it would be better for your party, better for the Trump campaign to not have jumped in as much as he did?"

"At any point, I'm asking you, Ronna, did you wish the president didn't jump in as much?" she asked.

Smith went on to point to a recent Monmouth University national poll that found Biden leads Trump 57% to 38% among women voters.

"Doesn't that concern you?" Smith pressed.

For her part, McDaniel asserted that "a lot" of Trump's debate performance appealed to women.

Smith reminded McDaniel that Trump had more than twice as many interruptions as Biden.

"When you look at the interruptions, our Brain Room dug into exactly how many interruptions there were on the part of both candidates," Smith remarked. "In total, Biden, 67 times. President Trump, 145 times. You can tally it up and you can see there were more interruptions."

"Would you support a mute button?" Smith wanted to know.

"These are grown men," McDaniel insisted. "They can handle each other."