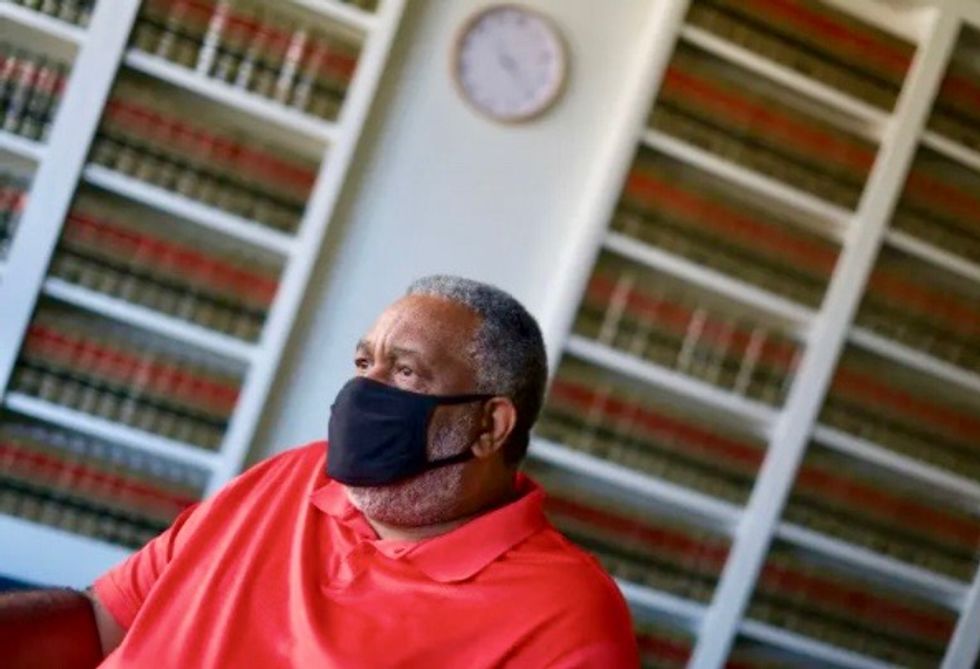 Anthony Ray Hinton, an innocent man, spent 30 years on death row in Alabama because, he says, he was "black and poor." His name finally cleared, he now campaigns for justice -- which he says can only be achieved by beating Donald Trump at the ballot box.

The 64-year-old African-American, his hair and beard graying, has mixed memories of the fateful day of April 3, 2015.

After three decades behind bars -- and under constant threat of execution -- he regained his freedom on that day to start the second phase of his life.

"It was like I was walking on clouds" as he fell into the arms of welcoming relatives, he recalled.

But his sense of joy was tempered. "It was good that I was finally free. It was bad that my mother was no longer here on this Earth to see her baby boy walk out of prison."

That day -- which he had dreamed of so often before waking up, innocent, in a claustrophobic "five by seven" foot cell -- finally ended his judicial nightmare.

Arrested in July 1985, Hinton was sentenced to death the following year, at the age of 29, for allegedly murdering two employees of fast-food restaurants, killed in separate armed hold-ups in Birmingham, the largest city in the southern state of Alabama.

His court-appointed lawyer, Hinton later told talk-show host Oprah Winfrey, had rejected his protestations of innocence, telling him "All of y'all (Blacks) is always doing something, and then saying you didn't do it."

There was no fingerprint evidence against Hinton and the testimony of a ballistics expert hired by his attorney was torn apart when it emerged the man was half-blind. Nor did an alibi from Hinton's employer help.

He was convicted largely because bullets recovered at the scene appeared to come from a gun owned by Hinton's mother, with whom he lived.

"The state of Alabama, in one word, kidnapped me," he said firmly, speaking in his deep, sonorous voice. "Because we have a system that, if you are born Black and poor in America, the system can pretty much do with you as it pleases."

It was not until 1999, when lawyer Bryan Stevenson -- founder of the Equal Justice Initiative (EJI) -- took up Hinton's case that the truth began to emerge. Very, very slowly.

Hinton was to spend another 16 years on death row, saved only by a new ballistics test, an intervention by the US Supreme Court and a second trial.

For years in prison he obsessed over the thought of gaining revenge for his wrongful conviction.

"I would wake up and all I could think about was revenge," he said. But he came to realize that "that's not who I am."

"I can't enjoy even being alive when you've got this much hate for someone," Hinton said, speaking from the EJI offices in a historic building in the city of Montgomery where slaves were once warehoused, after arriving by boat, before being sold.

So "I sat back and I asked the God that I believe in to remove that hatred from me."

Other ghosts of segregation haunt this central Alabama city, a cradle of the equal-rights struggle. It was there, in a celebrated act of civil disobedience, that a quiet but determined Black woman named Rosa Parks refused in 1955 to give up her bus seat to a white passenger.

That simple act catalyzed a historic protest movement that had its echoes this year after the death in Minnesota -- under the knee of a white police officer -- of African-American George Floyd.

But for Hinton, taking to the streets is not enough.

"The best protest, to me, is when you go to that ballot box, November 3," he said. "And when you protest by voting, that's when you send a loud and clear message: We're not going to stand for it anymore."

"If America is to survive, we only can survive if we get him out of office, November 3."