'Back at the head of the table': A look at Biden's foreign policy agenda 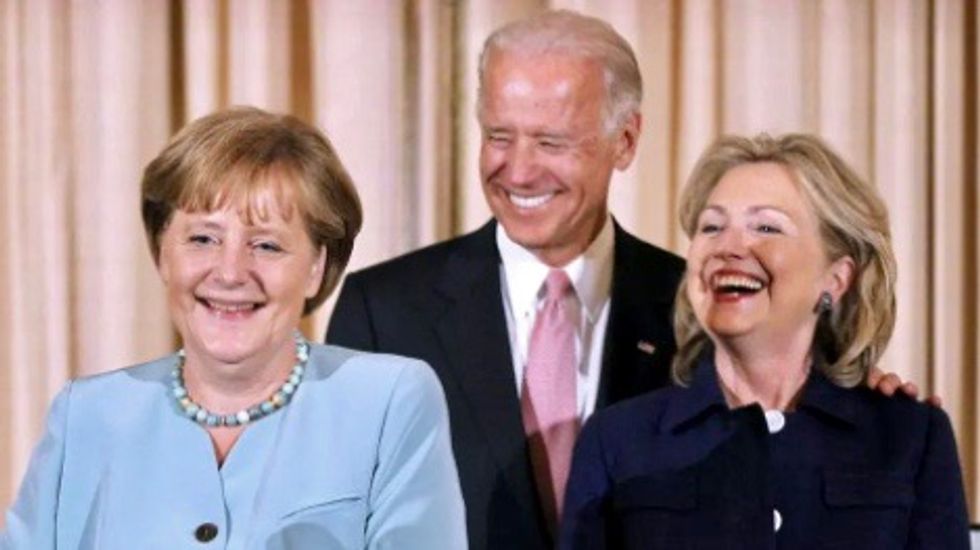 US president-elect Joe Biden's approach to diplomacy is diametrically opposed to that of the outgoing Donald Trump, known as he was to levy undiplomatic salvos at foreign leaders via social media. But one shouldn't expect a wholesale revamp in substance when the veteran Democrat takes office in January. FRANCE 24 takes a closer look at Biden's foreign policy agenda.

The former US vice president brings a wealth of foreign policy experience, expertise and, not insignificantly, genuine interest in global affairs to the White House. The Democrat served as chair of the Senate Foreign Relations Committee, readily making trips to Iraq and Afghanistan to gather the facts on the ground, prior to spending eight years as President Barack Obama's right-hand man from 2009 to early 2017.

German Chancellor Angela Merkel on Monday reflected fondly on her regular meetings with VP Biden under Obama. "He knows Germany and Europe well. I remember good encounters and conversations with him," Merkel said as she underlined Biden's "decades of experience in foreign policy" and "very warmly" congratulated him on his election win.

The transatlantic conversation is indeed likely to mellow amid a promised early flurry of multilateral moves on Biden's part that dovetail with key European priorities and reverse the sorts of Trump manoeuvers that boggled European capitals.

Biden has said his foreign agenda would "place the United States back at the head of the table, in a position to work with its allies and partners to mobilize collective action on global threats". The operative word there may be "table"—Biden recognizes there should be one. After four years of "America First", with the erratic Trump toppling proverbial roundtables with an iconoclastic flourish, Biden will be conspicuous about putting the pieces back together.

"For 70 years, the United States, under Democratic and Republican presidents, played a leading role in writing the rules, forging the agreements, and animating the institutions that guide relations among nations and advance collective security and prosperity—until Trump," Biden wrote in a Foreign Affairs piece last spring that reads like a foreign policy manifesto. "If we continue his abdication of that responsibility, then one of two things will happen: either someone else will take the United States’ place, but not in a way that advances our interests and values, or no one will, and chaos will ensue. Either way, that’s not good for America."

Biden says he will rejoin the Paris Climate Agreement "on day one" and, "in his first 100 days in office", he will convene a global summit on climate to press the world's top carbon-emitters to join the US in making national pledges more ambitious than the ones they made in the French capital back in 2015.

On the campaign trail, the president-elect also pledged to rejoin the World Health Organization on his first day in office—after Trump eschewed and quit the Geneva-based institution in the midst of the Covid-19 global public health crisis. "Americans are safer when America is engaged in strengthening global health," Biden reasons.

Americans are safer when America is engaged in strengthening global health. On my first day as President, I will re… https://t.co/qNgyOKHOlE
— Joe Biden (@Joe Biden) 1594154693.0

During his first year in office, the president-elect has also pledged to host "a global Summit for Democracy to renew the spirit and shared purpose of the nations of the Free World". The gathering's stated aim is to obtain commitments toward fighting corruption, countering authoritarianism, notably through election security, and advancing human rights globally.

As a presidential candidate, Biden stumped for renewing America's support NATO, calling his country's commitment to the 70-year-old political and military alliance "sacred, not transactional", in contrast to his predecessor's vision of the body as a protection club with dues.

"NATO is at the very heart of the United States’ national security, and it is the bulwark of the liberal democratic ideal—an alliance of values, which makes it far more durable, reliable, and powerful than partnerships built by coercion or cash," the lifelong transatlanticist wrote. Cue the sigh of relief in Baltic capitals.

Naturally, part of Biden's argument for bolstering NATO is the message it will send Moscow. "To counter Russian aggression, we must keep the alliance’s military capabilities sharp while also expanding its capacity to take on nontraditional threats, such as weaponised corruption, disinformation, and cyber-theft," Biden explained in Foreign Affairs.

He was vice president in 2014 when Russia annexed Crimea from Ukraine, sinking ties between Moscow and Washington to a post-Cold War low.

Observers note that Washington has not been complacent with Moscow in the intervening years, imposing sanctions on Russia during Trump's term in office even as the man behind the desk in the Oval Office seemed keen to look the other way. But under Biden, the mixed message of friendliness to Vladimir Putin conveyed by Trump—who declined to address such affronts as the bounties Moscow allegedly put on the heads of US troops in Afghanistan—will likely be a thing of the past.

"We must impose real costs on Russia for its violations of international norms and stand with Russian civil society, which has bravely stood up time and again against President Vladimir Putin’s kleptocratic authoritarian system," Biden has pledged.

Despite his wariness of Moscow, Biden has promised to pursue an extension of the New START Treaty, which his campaign called "an anchor of strategic stability between the United States and Russia" and use that nuclear arms reduction agreement as a foundation for future arms control arrangements.

Biden sees China, meanwhile, as the most pertinent threat to US interests long-term, a stance that enjoys rare relative bipartisan agreement in Washington, meaning the shift on relations with Beijing will primarily be one of tone and method.

Biden has slammed China for stealing US firms' technology and intellectual property and for giving its state-owned firms an unfair advantage with subsidies.

Instead of addressing US concerns unilaterally as Trump has, Biden has proposed building a coalition of allies to confront China where the nations disagree (unfair commercial practices, human rights abuses) and to engage in cooperation where it is needed (climate issues, global public health, nonproliferation, not least vis-à-vis North Korea).

"On its own, the United States represents about a quarter of global GDP. When we join together with fellow democracies, our strength more than doubles. China can’t afford to ignore more than half the global economy," wrote Biden in Foreign Affairs. "That gives us substantial leverage to shape the rules of the road on everything from the environment to labour, trade, technology, and transparency, so they continue to reflect democratic interests and values," he reasoned.

"By cutting us off from the economic clout of our partners, Trump has kneecapped our country’s capacity to take on the real economic threat," he wrote, pointing to China.

No more 'forever wars' in the Middle East

Biden has pledged to "re-enter" the Iran nuclear deal, "negotiated by the Obama-Biden administration alongside our allies and other world powers" — namely France, Germany, the UK, the EU, China and Russia. He credits the accord with having blocked Iran from obtaining a nuclear weapon and blames Trump's decision to cast it aside for prompting Iran to rekindle its nuclear ambitions and adopt a more provocative stance. Biden has pledged to rejoin the agreement "if Tehran returns to compliance" and use "hard-nosed diplomacy and support from our allies to strengthen and extend it, while more effectively pushing back against Iran's other destabilising activities".

Meanwhile, the former vice-president has also said he would "end our support for the Saudi-led war in Yemen".

Although he has said Trump's unilateral approach to the Israeli-Palestinian conflict has made the two-state solution for Israel that Biden backs more difficult, he has said he would keep the embassy Trump moved to Jerusalem in 2018 where it is. Biden has welcomed the normalizing of relations the Trump administration helped negotiate between Israel and Gulf states in recent months.

The Democrat has pledged to sustain "an ironclad commitment to Israel’s security". He has also cautioned the country over its treatment of the Palestinian territories, saying earlier this year, “Israel needs to stop the threats of annexation and stop settlement activity because it will choke off any hope of peace."

In terms of US military commitments in the region, Biden has advocated bringing home the vast majority of American troops in the Middle East and Afghanistan, in favour of narrowing the focus to Al-Qaeda and Islamic State group. He wants to end the "forever wars" the US has waged in the region.

"We must maintain our focus on counter-terrorism, around the world and at home, but staying entrenched in unwinnable conflicts drains our capacity to lead on other issues that require our attention, and it prevents us from rebuilding the other instruments of American power," he wrote in Foreign Affairs.

It would be a misnomer to count Brexit as among Biden's hot-button policy issues. Indeed, while Trump ally Boris Johnson and his Conservative leadership in London once looked forward to negotiating an "ambitious" post-Brexit trade deal with the US, neither Biden's campaign website's outline of his foreign policy priorities nor the former vice president's quasi-manifesto in Foreign Affairs makes any mention of the United Kingdom per se or its divorce proceedings from the EU. What is clear is that Biden is not poised to cater to the so-called "Special Relationship" at any cost.

"We can't allow the Good Friday Agreement that brought peace to Northern Ireland to become a casualty of Brexit," the president-elect, a noted Irish-American, tweeted in September. "Any trade deal between the US and UK must be contingent upon respect for the Agreement and preventing the return of a hard border. Period."

Not quite Twitter diplomacy as Trump might conduct it, but the president-elect's sentiment won't have escaped Downing Street's attention as it turns the page on Europe.