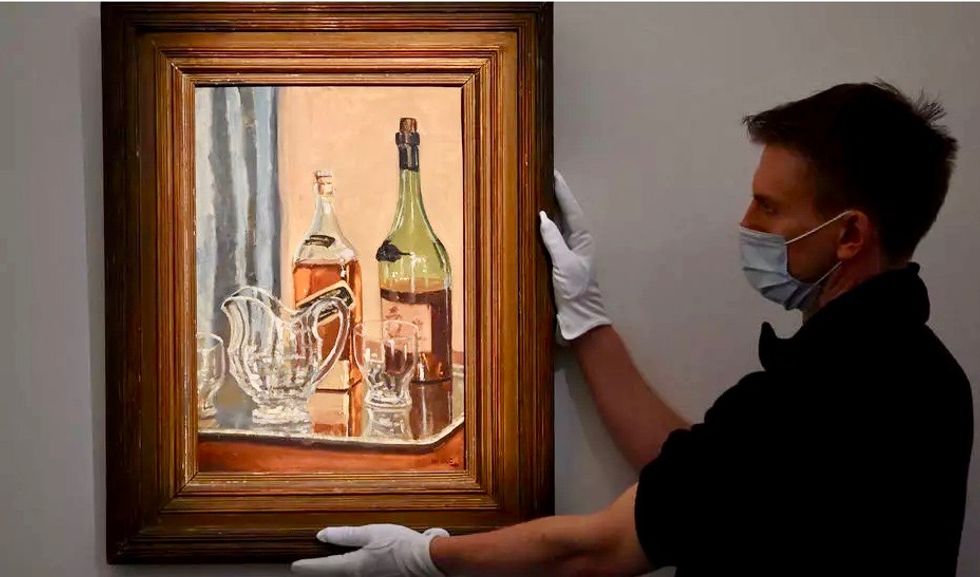 Churchill's "Jug with Bottles" is expected to sell for up to £250,000 after online bidding starts Tuesday DANIEL LEAL-OLIVAS AFP

The oil painting of a bottle of Johnny Walker's Black label whisky and a bottle of brandy with a jug and glasses reflects Churchill's fondness for the blend, which he often drank first thing in the morning with soda water, the auction house said.

Churchill, who was a keen amateur artist, created the work in the 1930s and later gave it to the American businessman W. Averell Harriman, who acted as US special envoy to Europe in the 1940s.

Harriman was photographed sitting between Churchill and Stalin in Moscow in 1942, and the gift of the painting suggests he shared convivial drams with Churchill.

The politician would give paintings to "like-minded people," said Simon Hucker, co-head of modern and post-war British art at Sotheby's.

It is unclear whether Churchill knew that the wife of his son Randolph, Pamela Churchill, was having an affair with Harriman during this period, The Times newspaper reported.

Pamela Churchill married Harriman decades later in the 1970s and the painting was sold following her death in 1997.

It is going back on sale after the deaths of its current owners, the US collectors Barbara and Ira Lipman.

A similar work by Churchill, featuring a collection of bottles and called "Bottlescape" hangs at Chartwell.

Churchill "was obviously an amateur painter but he got lessons off really great painters," said Hucker.

"This particular still life is actually quite unusual because he usually did landscapes."

While it seems unlikely that a modern politician would depict their favourite tipple in such a recognisable way, Churchill was probably more focused on capturing the reflection and transparency of glass, the art expert said.

In any case, "he didn't do these for the public, he did them for himself".

Some have disputed Churchill's artistic talents, with The New York Times once describing "Bottlescape" as "truly hideous."

Yet his paintings have reached high prices at auction.

"The Goldfish Pool at Chartwell", which came from the collection of his daughter Mary Soames, sold for a record £1.8 million at Sotheby's in 2014.

Painting was a form of "private meditation" for Churchill, said Hucker.

"He did it all his life, even in his darkest hour he was still painting if he could."