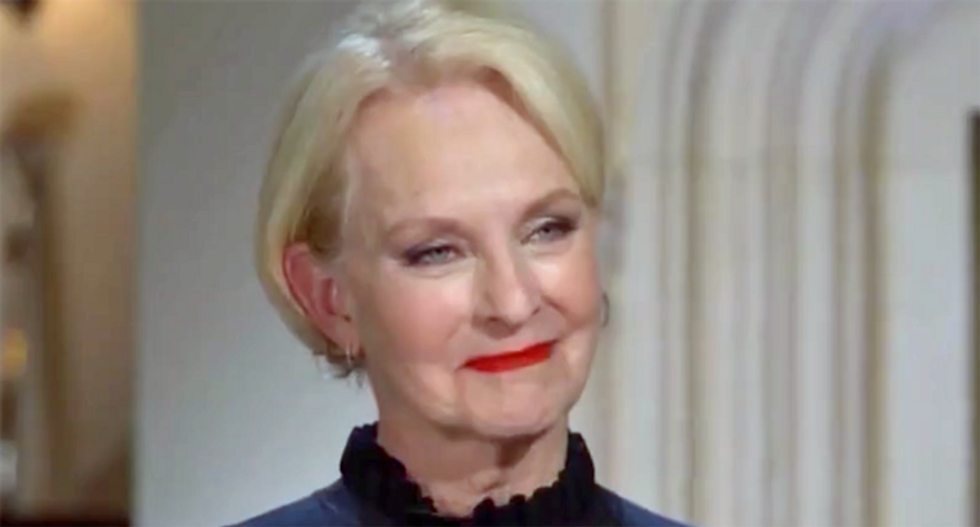 Republican Cindy McCain is a staple in GOP politics even after her husband Sen. John McCain (R-AZ) passed away in 2018. In an editorial for USA Today, McCain told Republicans that it's perfectly acceptable in this election to vote for a Democrat, even if they are strident and straight-ticket GOP voters.

"Joe understands the importance of national defense and has a long and strong record of support for the military," wrote McCain. "As commander in chief, he will keep the nation strong and ready to meet the array of threats facing America. Moreover, he knows the value of our security alliances in keeping the country safe and prosperous in a dangerous and unpredictable world. As president, he will strengthen America’s vital partnerships to advance U.S. interests and values."

Trump, by contrast, has alienated the global community and diminished the U.S. on the international stage.

"Like him, I am a parent of two veterans," McCain also noted. "Joe’s reverence for the nation’s service members and veterans is second to none. His commitment, like mine, starts at home. We can have every confidence he will ensure that the country cares for and supports our heroes with the same honor and devotion with which they have served us."

Biden's sons served in the military, with late-son Beau Biden giving up his political position in Delaware to serve in Iraq in 2009.

When it comes to the coronavirus pandemic, McCain said that Biden is the steady hand that the country has lacked for the past year.

"A President Biden will provide the leadership the country demands to beat the COVID-19 pandemic," she wrote. "No one will work harder in bringing the nation together to achieve the mission. Guided by a genuine spirit of bipartisanship, Joe won’t be looking for Democratic ideas or Republican ideas but the country’s best ideas to ensure that our families, businesses, communities and country recover swiftly."

She likes Biden's education plan as well. As a former teacher, McCain said that she knows Biden will place huge importance on the impact education has on a child's future. He has the benefit of being part of the education discussion for 43 years while he has been married to a teacher.

"My husband believed in straight talk and country first," McCain also said. "So do I. Joe Biden is the right choice to be president at this pivotal time in the country’s history. He is a patriot who believes passionately in America and the principles and values that make it great. He will be a leader whom all Americans can count on to put country above party, patriotism above partisanship, and national interest ahead of his own. Most important, Joe will unite a deeply divided country and bring together all Americans to address and overcome the great challenges we face."

She closed by telling Republicans that she will vouch for Biden after knowing him for decades.

"He will have the vote of this proud Republican on Tuesday," she said.