Convoy of National Guard deploys to Chicago — but brass won’t reveal details of why: report 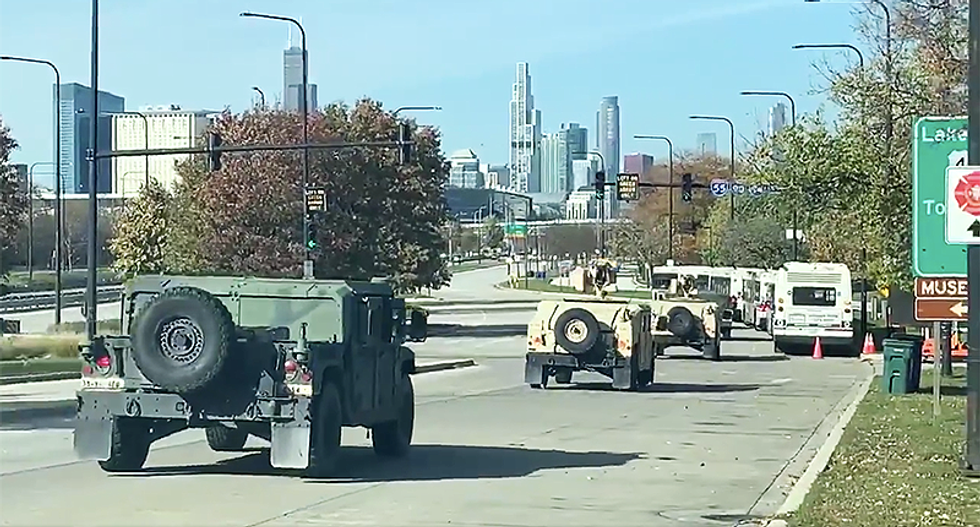 National Guard troops were captured on video driving into McCormick Place in the south-side of Chicago on Monday.

According to Washington Post reporter Alex Horton, the "Illinois Guard won't provide any details on this movement, even though a lack of clarity is confusing and unnerving for residents."

According to the Army Times, a new round of Guard troops were activated Monday, "including 1,000 troops in Massachusetts, 300 in Arizona, and an undisclosed number in Oregon and Illinois."

"The missions range from assisting with cyber defense, working the polls, and standing-by in case of post-election civil unrest," the report says. "The Massachusetts and Oregon troops will be on standby in case of civil unrest, and the Arizona forces will be on stand-by for rapid deployment anywhere in the western portion of the nation if requested by any governor. National Guard officials in Illinois were not forthcoming about the roles their newly activated troops would play."

“Look, it’s called insurrection. We just send them in and we do it very easy,” Trump told Fox News in September.

Such statements have caused concern among Americans because troops aren't supposed to participate in U.S. law enforcement according to the 1878 Posse Comitatus Act. The reason Trump has used the word "insurrection" is that the Insurrection Act is an exception to the Posse Comitatus Act, giving the president the power to send in troops to quell "domestic insurrection."

“There would be no added benefit of federalizing Guard forces [for the election],” said Army Maj. Gen. Jeff Holmes, Tennessee’s adjutant general. “I cannot think of any scenario where we would recommend or ask for being federalized.”

See the video of the military convoy in the video below:

Illinois Guard won't provide any details on this movement, even though a lack of clarity is confusing and unnerving… https://t.co/XrkpCLcFQV
— Alex Horton (@Alex Horton) 1604346967.0