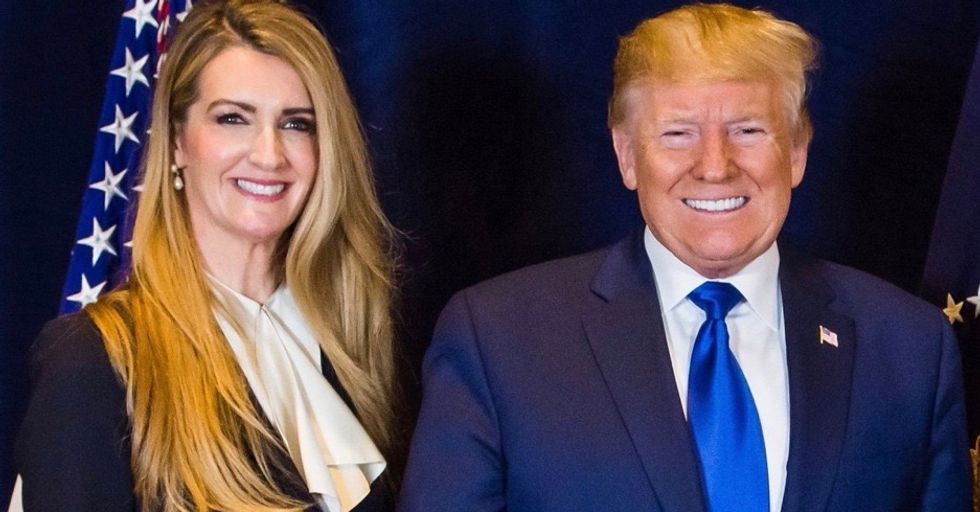 Trump endorsed the Republican Raffensperger less than two years ago in his tight election victory over former Democrartic congressman John Barrow. Here’s what Trump tweeted, lathering praise upon Raffensperger for what the local Fox TV station had politely noted were “issues that are usually outside the Secretary of State's position.”

Brad Raffensperger will be a fantastic Secretary of State for Georgia - will work closely with @BrianKempGA. It is… https://t.co/h7aOpxnTuw
— Donald J. Trump (@Donald J. Trump) 1543263658.0

Raffensperger might seem like a dreaded RINO now that Georgia senators Kelly Loeffler and David Perdue are calling for his head for the apparent crime of not having been willing enough to cheat for Republicans. But as a state legislator, Raffensperger had seemed a model citizen from Trump’s perspective.

In early 2016, for example, Raffensperger had cosponsored legislation prohibiting undocumented immigrants from serving on local government bodies. That was almost a year before Trump rode xenophobia to office. And he doubled down in February 2017 prohibiting state funding to sanctuary campuses.

He was endorsed by Georgia Right to Life and the National Federation of Business. He got his “A” rating from the NRA and support concealed carry on campuses.

So, when did Raffensperger get to be such a horrible Republican? Presumably he’s still willing to defend Georgia’s Mexican border and there’s no evidence he stopped loving our military and vets.

What’s more, Raffensperger had even been successful in towing the party line as secretary of state, when he appealed an August 31 ruling by U.S. District Eleanor Ross that would have invalidated a state law requiring all absentee ballots to be received by county elections officials by 7 p.m. on Election Day. Ross had cited the health risks of the pandemic.  An appellate court side with Raffesperger.

If that made him a Republican hero, it was for a very short period of time.

Loeffler and Perdue demanded the resignation of Georgia’s GOP secretary of state Brad Raffensperger on Monday, claiming he “failed to deliver honest and transparent elections” but offering no specifics or proof to back up the allegation of election “irregularities,” New York Magazine reported. “The call for Raffensperger to “step down immediately” came hours after his office rebuked claims of widespread voter fraud in Georgia’s election, as the Atlanta Journal-Constitution reported, where President-elect Joe Biden’s lead has grown to more than 10,500 votes.

“The mismanagement and lack of transparency from the Secretary of State is unacceptable,” Perdue and Loeffler said in their joint statement. “There have been too many failures in Georgia elections this year and the most recent election has shined a national light on the problems. While blame certainly lies elsewhere as well, the buck ultimately stops with the Secretary of State.

“The senators’ attack amplifies Trump’s ongoing lies about election fraud and refusal to accept defeat. Trump reiterated his delusion on Twitter moments after Loeffler and Perdue demanded Raffensperger’s resignation, an apparent endorsement of their attack. Both senators were forced into runoff races against Democrats after they both failed to secure 50 percent of the vote required for an outright win on Election Day.

As the magazine suggested, “The runoff elections could determine control of the Senate, and it seems that Perdue and Loeffler are trying to stay on Trump’s good side so they can turn out Republican voters on January 5. Georgia’s Republican governor, Brian Kemp, also weighed in, supporting the senators against the secretary of state.

Raffensperger firmly rejected the senators’ call for his resignation in a statement later that day that came close to calling other Republicans sore losers, the magazine reported.

It quoted Raffensperger: “I know emotions are running high. Politics are involved in everything right now. If I was Senator Perdue, I’d be irritated I was in a runoff. And both senators and I are all unhappy with the potential outcome for our president.”

And there was this: “Raffensperger defended the general election as a “resounding success” and maintained that “the process of reporting results had been orderly and followed the law,” though he nonetheless paid lip service to the ongoing claims of fraud propagated by the president and his allies. “Was there illegal voting? I am sure there was. And my office is investigating all of it. Does it rise to the numbers or margin necessary to change the outcome to where President Trump is given Georgia’s electoral votes? That is unlikely,” Raffensperger said.

Yesterday, Trump was tweeting love to Raffensperger. Instead, he retweeted Breitbart:

.
2020 Election Opinion SmartNews
Report typos and corrections to: corrections@rawstory.com.
Like this article ? Text `Support` to 50123 to donate.
READ COMMENTS - JOIN THE DISCUSSION