GOP senator profited off stocks in defense contractor while passing legislation to benefit them: report 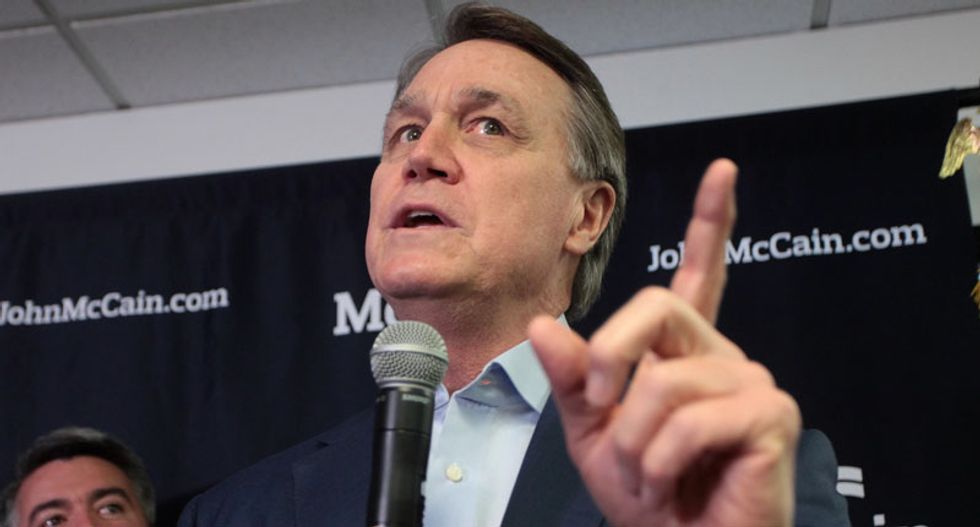 On Wednesday, The Daily Beast reported that Sen. David Perdue (R-GA) made a series of well-timed stock trades in a defense contractor, while chairing a subcommittee instrumental to getting favors to them passed in the omnibus Pentagon budget.

"In January 2019, Perdue was named as the chairman of the Senate Armed Services Subcommittee on Seapower," reported Sam Brodey. "It was good home-state politics for Perdue: Georgia is home to one of the most important Naval facilities on the East Coast, the Kings Bay Naval Submarine Base. And his appointment was seen as a win for the submarine segment of the Navy, with trade publications calling it a 'coup' for submariners."

"But in the month before he took over the job, Perdue did something unusual: he acquired up to $190,000 worth of stock in BWX Technologies, a company he had never invested in before," said the report. "The Virginia-based firm had lucrative contracts with the U.S. Navy to develop high-tech components for its fleet of nuclear submarines — and it was looking to expand that business when lawmakers took on the 2019 version of the sweeping annual legislation that sets funding benchmarks for the U.S. military, called the National Defense Authorization Act."

"Perdue would have a key role in shaping the NDAA as Seapower chairman, and later as one of the few lawmakers hand-picked by party leadership to hammer out the final version of the bill between the House and Senate," said the report. "By the time the bill passed the Senate in June, Perdue touted several wins — one of which was securing $4.7 billion for Virginia-class submarines. As it happens, BWX is one of two to three vendors with Pentagon contracts to design and make key parts for Virginia-class submarines, including nuclear reactors that power them and the systems that launch missiles from the submarines."

The senator's campaign has denied any misconduct, alleging that he does not personally manage his stock portfolio.

Perdue is in a close contest with Democratic challenger Jon Ossoff in one of two Senate runoffs to take place in Georgia at the beginning of next year. Sen. Kelly Loeffler, Perdue's fellow Georgia senator, has also been accused of improper stock investments timed to classified briefings on the coronavirus pandemic, although she too maintains she doesn't personally oversee her investments and a federal ethics investigation has not accused her of criminal behavior.