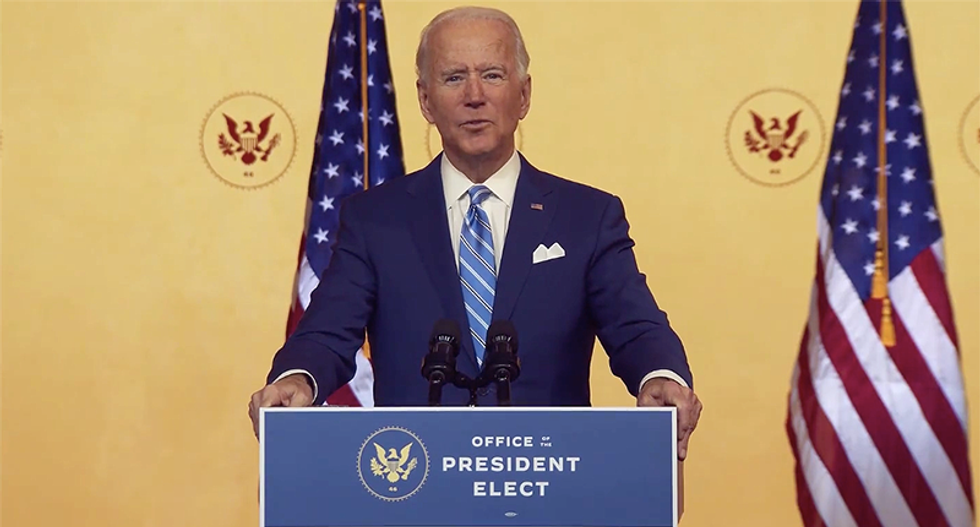 President-elect Joe Biden addressed the nation about the Thanksgiving holiday, encouraging Americans to keep wearing their masks and stay away from people outside of your bubble because there is a light at the end of the COVID-19 tunnel of terror.

There are reports of vaccines possibly being available to healthcare and nursing home workers by the end of the year, which could help with over-crowding in hospitals.

Biden spoke about his family's large Thanksgivings and how hard it will be for him this holiday season without the crowd of Bidens. But he, like many Americans, are doing the right thing, he said, not just for his family but for every other family in the community.

You can see the comments below from people overwhelmed with gratitude that Biden is already bringing empathy back to the Office of the President:

As Trump is calling for the US election to be overturned speaking through an iPhone speakerphone, Biden is addressi… https://t.co/Q17Ym5pjnH
— Will Steakin (@Will Steakin)1606335223.0

So reassuring to hear the words of President-elect Biden address the nation pre-Thanksgiving knowing that while it… https://t.co/1JPVPX8BUY
— Joe Zee (@Joe Zee)1606335020.0

The ultimate presidential transition: as Trump rants over a cellphone to rubes at a Pennsylvania hotel, Biden addre… https://t.co/dd65HdzhgX
— Mark Follman (@Mark Follman)1606334900.0

While Trump whines about losing an election, Biden talks about how difficult times have “forged the soul of the nat… https://t.co/rDukZC69xA
— Ivo Daalder (@Ivo Daalder)1606334296.0

@WalshFreedom This Thanksgiving eve, Trump and Biden had very different messages for America. https://t.co/XjPLISBv7t
— The Recount (@The Recount)1606336518.0

Trump, at one point in the early pandemic, tried calling himself a wartime president. Biden is presenting himself… https://t.co/yM5LJEIHy5
— Annie Karni (@Annie Karni)1606334625.0