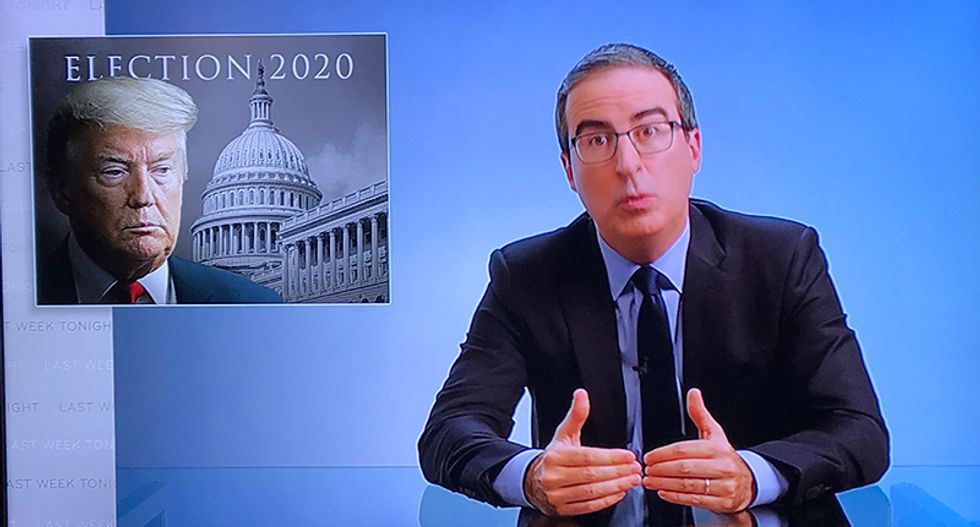 "Last Week Tonight" host John Oliver confessed that he didn't want to be talking about the 2020 election again, but there was too much to deal with.

"Instead, we have to talk about this as*hole," said Oliver pointing to a photo of President Donald Trump. Typically, when a president loses, the country moves on, but not in Trump's America.

Oliver found the most disappointing piece of Trump's refusal to let go comes from people like Secretary of State Mike Pompeo. This week he refused to accept the election results, despite, Oliver said, being the guy who's "supposed to denounce coups."

Senate Majority Leader Mitch McConnell (R-KY) took to the Senate floor to denounce those proclaiming the 2020 election had a real winner. At one point, McConnell even shamed Democrats, saying that they can't lecture Republicans after they refused to accept the 2016 election for four years.

"Okay, first, no one expected Trump to immediately cheerfully accept the results," said Oliver. "He's incapable of cheerfully accepting anything apart from blo*jobs, Nazi endorsements and the opportunity to scream inside a stranger's truck."

His second point for McConnell is that it is an outright lie that Democrats didn't "accept" the 20216 election. Hillary Clinton conceded to Trump the day after the election and President Barack Obama had him as a guest in the White House the day after that. Trump won't even let staffers sign the letter authorizing a transition.

Oliver moved to talk about Trump's lawyers and Fox News allies' accusations that the election was a fraud.

In one case, Trump's team alleged 15,000 dead voters cast a ballot. So, CNN took the list of so-called dead voters and investigated. They randomly picked 50 people and found that 37 were dead and did not vote, five had voted and were still alive, and eight people were still alive but hadn't voted at all.

"Meaning exactly zero dead people were voting," said Oliver. "Yes, it's just a sample. But if you were in an Oreo factor and fifty out of fifty Oreos you picked off the line were two squished around a used condom, you might well not risk trusting the next cookie that comes past you."

In another story, Fox News host Tucker Carlson did a sloppy and false report that was tweeted out by the Trump War Room and shared by Rep. Matt Gaetz (R-FL). Carlson alleged that a Georgia voter was continuing to vote even though he died in 2006. After 14 years, Carlson said that James E. Blalock, Jr. was "still mailing things."

"Maybe his widow has an answer," Oliver said, showing a video of a local news report debunking Carlson.

The most substantial whistleblower claim came from a Nevada voter who appeared on Laura Ingraham's Fox News show. That woman refused to show her face or her real voice. She told a tale of a Biden/Harris campaign van rolling up to the election headquarters with boxes of ballots. But when the woman was asked to sign a sworn affidavit attesting to her story, she refused to give her name, address, phone number or any other information.

That has been the trend in almost all claims of voter fraud from Trump supporters. When it comes time for them to swear before a court of law with penalties for lying, none have been willing to do it. In other cases, the "fraud" claims have been from people who simply don't know what voter fraud is.

Trump press secretary Kayleigh McEneny held up a stack of papers showing 234 claims of so-called "voter fraud" in Michigan while on Fox News. None of those claims are actual fraud. In fact, none of them were illegal things. Some were complaining about people wearing Black Lives Matter clothing or that someone rolled their eyes at a Trump voter.

The host said that with so many false voter fraud claims, he could do an entire show just debunking those stories.

While Trump is failing in his voter fraud crusade, Republicans have quietly asked, "what's the harm" in allowing him to throw a fit for the next 60 days.

The problem is that it's stopping President-elect Joe Biden from having any access to the things necessary to start a peaceful transition of power to the next presidential administration. In particular, Trump's team won't allow any of the COVID-19 task force to meet with Biden's team at a time when Americans could really use some help on the virus.

"But the damage goes further," said Oliver. "It plays into grim fantasies of embattled Trump supporters. Something expressed perhaps most dramatically and stupidly by the actor Jon Voight, who made this video that Trump himself retweeted on Wednesday."

"My fellow Americans," Voight began in his statement. "I stand here with all that feel as I do, disgusted with this lie that Biden has been chosen. As if we all do not know the truth, and when one tries to deceive, we know that one cannot get away with it; there will be a price to pay....My friends of all colors, races, and religions, this is now our greatest fight since the civil war, the battle of righteousness versus Satan. Yes, Satan, because these leftists are evil, corrupt, and they want to tear down this nation."

He then closed with an alleged Muhammad Ali quote, "It is not over till the last punch you have."

Oliver debunked the video first by saying that it's obvious that Voight was sitting down, not standing. The hyperbole that Democrats are somehow "Satan." But it was the Muhammad Ali quote that really annoyed Oliver because there is no quote from Ali that says that. He noted that it sounds a lot like a tagline from a VHS copy of Rocky V.

The host explained that millions of Americans believe the twisted tales, even if they're obviously false. In some cases, it's deadly serious. Two armed men showed up this week outside of a ballot-counting location. One Philadelphia County Commissioner told "60 Minutes" that he's getting veiled death threats from people saying, "This is what the Second Amendment is for."

"For counting votes," the official said. "In a democracy."

It's Trump's dangerous game, Oliver said. There's a huge difference between "not my president" and "not the president."

These Trump supporters don't exist in a vacuum, Oliver explained. "They've been fed a steady diet of misinformation, bullsh*t fraud claims and a victim narrative from outlets like Fox News, Newsmax and OAN, and most importantly, Trump himself."

Deep down, Trump knows it's over. At his only press conference in the past week, he nearly admitted that Biden would be the next administration. Fumbling around for the right words, Trump claimed that his administration would never put the country back in lockdown.

Essentially Trump is closing out his administration that has been four years of non-stop division with one more issue that can divide America even further.

Watch Oliver's takedown in the video below: