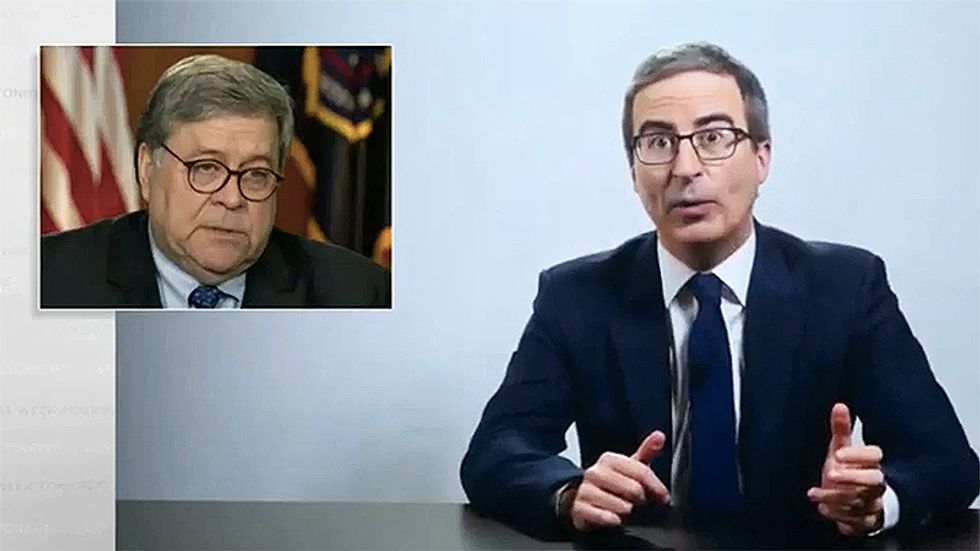 John Oliver did an extensive story on the coronavirus pandemic and how President Donald Trump has mismanaged the crisis. However, he wanted Americans to see another top report before the election on Tuesday, this time about Attorney General William Barr.

Referring to him as the "constipated Charmin Bear," Oliver said that Barr came into office with the thought that he would be "the adult in the room," but he's since turned into one of the most frightening Trump shills in history.

"Since becoming AG, Barr has been in the news constantly and almost never for good reasons," said the host. "In just the past few months, he has, among other things, sown distrust in mail-in-voting, and also dismissed public health measures in the middle of a pandemic in the grossest possible way."

Oliver then played a clip of Barr calling national lockdowns almost as bad as slavery.

After a description of Barr's history of being a kiss-ass in college, Oliver explained that some kids are "assh*les" but "some adults are assh*les and Barr is one of them."

Oliver played a clip of former President George H. W. Bush mocking Barr for being "a little narc who devoted himself to an unhealthy obsession with authorities instead of cultivating any meaningful relationships."

He then pointed out that under Bush, "Barr made a name for himself as a hard-liner on immigration, signed off on a massive surveillance program, and had a view of criminal justice that is perhaps best summed up by a memo that the DOJ produced titled, 'The Case for More Incarceration.'"

Oliver explained that Barr also helped wage war against the separation of powers and checks-and-balances and helped cover up Bush's effort to fund massives weapons to send to Saddam Hussein without congressional authorization. As AG, Barr refused to appoint a special prosecutor to investigate. The reason for that goes to his long-held belief that the executive branch is a dictator, with a president who has supreme authority to do whatever he wants.

The Unitary Executive Theory, which Oliver explained, is a legitimate legal issue, despite Barr mocking it as something that "scares" liberals. It holds that Trump would have full executive power and that the three co-equal branches of government are "wrong." The theory explains that each branch of government can have its authority over itself. Barr takes that even further with his belief that the only checks on the presidency are through impeachment and elections.

Even Bush refused to implement his philosophy at the time, saying that they should be more prudent. Barr also supported the pardons of those in the Iran-Contra scandal. Oliver explained that the nickname of "the cover-up attorney general" is an apt description given his long history of doing precisely that.

When Barr wrote his "audition" memo to Trump about the Russia investigation by Robert Mueller, he made the argument that Article II gives Trump all the power that he desires, which is probably why Trump began parroting the talking point. Unfortunately for Trump, he didn't even know what was in Article II and couldn't have a legal conversation with a reporter, much less a legal scholar, about the topic.

When he was questioned about it, Barr used his favorite tactic, rambling on about nothing to bore everyone before dodging the question entirely. During his confirmation hearing, Barr ignored Sen. Diane Feinstein's (D-CA) question about the word "corruptly," which he lectured meant "to influence in a way that is something that is good and fit to something that is bad." He said it was a 19th-century definition of the word. It remains unclear why Barr doesn't believe in the 21st-century definition of "corrupt," which is a "willingness to act dishonestly." It's all in efforts "to justify his belief that the president can be a tyrant," said Oliver.

Barr is so outdated that it isn't just 19th-century verbiage he prefers, he also thinks that all of America's problems stem from the family's moral decay. The antiquated philosophy boasts issues like crime comes from single mothers and leads to the downfall of society.

Trump is furious that Barr hasn't prosecuted former President Barack Obama or Vice President Joe Biden ahead of the election, but Barr did many things to try and cover-up for Trump.

"He famously provided an exculpatory summary of Mueller's report" that proved to be an outright mischaracterization of Mueller's findings. "Since then, his DOJ has suggested a lighter sentence for Roger Stone, dropped the charges against Michale Flynn, who, you remember, had pled guilty. Removed an attorney from office who was investigating a Trump associate, sued John Bolton to try and stop the release of his book, and at one point, tried to have the U.S. government represent Trump as the defendant in a defamation suit arising from a Trump statement that a woman who'd accused him of rape was 'not my type," Oliver closed. He explained it definitely was not what the framers had in mind when they were talking about Article II.

It's for this reason that Barr is Trump's dream AG. He backs up Trump at every possible course.

In the end, Oliver listed out a whole slew of issues that he didn't even have time to touch on, all of which would be perfect examples for an impeachment investigation if Trump is reelected on Tuesday.