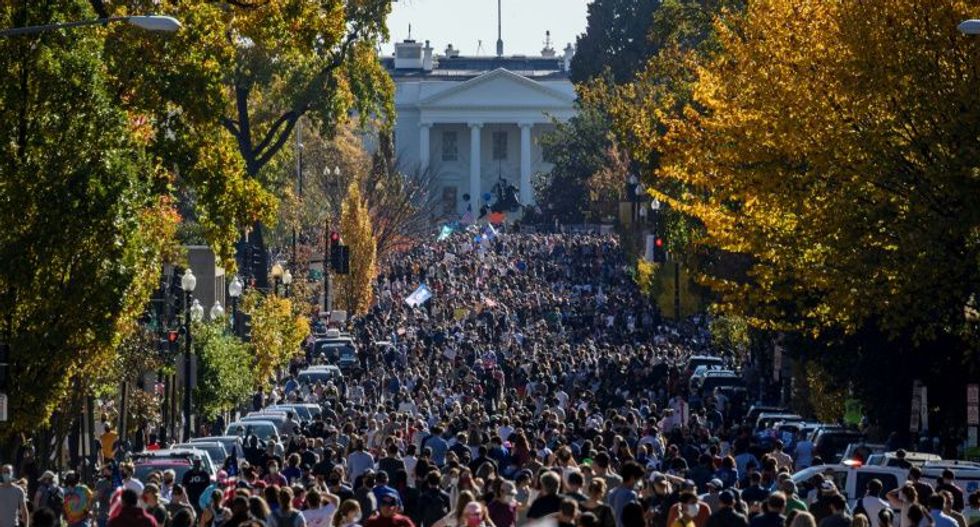 People celebrate on Black Lives Matter plaza across from the White House, after Joe Biden is declared winner of the 2020 presidential election. AFP photo.

From coast to coast, Americans jubilant over Joe Biden's presidential win on Saturday rushed into the streets, dancing, hooting, honking horns and singing on a day many had longed for after four turbulent years under President Donald Trump.

In spontaneous outbursts after news broke of the Democrat's win following nearly four nail-biting days of vote counting, they gathered outside the White House singing "goodbye" to Trump, celebrated outside Trump Tower in the president's native and very Democratic New York, and danced in the streets across the country in Los Angeles.

Trump was away golfing in neighboring Virginia when the news broke, and Biden supporters lined the streets of Washington as he returned to the White House. Trump, ever defiant, has not conceded defeat.

The Republican spent the morning tweeting inflammatory and unsubstantiated claims about voter fraud. But that did nothing to dampen enthusiasm in the US capital, where drivers honked horns, residents banged pots and pans, and people out in parks and hiking trails cheered and hooted.

"I'm here to celebrate," said Jack Nugent, a 24-year-old software engineer as he walked to Black Lives Matter Plaza, a newly christened area near the presidential mansion that was the epicenter of protests this summer about racial injustice, on an unusually hot and sunny November day.

"I'm really happy with the outcome. It's been so many years waiting for this day to happen."

Many people turned out with their loved ones, friends -- and even pets.

Yannh Djedjro, a 32-year-old who works in software and came to BLM Plaza with his fiancee and baby daughter, said: "I think it's amazing. People are ecstatic, everyone is happy, the people have spoken."

Like Washington itself, the crowd was ethnically diverse and included people of all ages.

It was a moment of catharsis for many who felt marginalized under Trump, with flags from the LGBT community, BLM and others flying.

"I'm Venezuelan but I've been living here for 10 years so it means a lot for me," said Rafael Contreras, 28.

"I think it's a hope for a better future for this country, especially for immigrants who have been feeling for the past four years that they're not welcome and they've been rejected by this country."

A giant inflatable Trump rat is being carried to the celebration outside the White House, with hundreds of people b… https://t.co/JvF4P0O8q7
— Will Sommer (@Will Sommer) 1604770421.0

Many signs turned Trump's catchphrase on the hit show "The Apprentice" against him: "Hey Trump...You're Fired!"

The atmosphere stood in complete contrast to the empty streets and despondency seen four years ago, when the heavily Democratic capital overwhelmingly voted for Hillary Clinton -- but she lost to Trump.

People are now popping champagne across from Trump Tower in Chicago, as a celebration grows near Michigan Avenue. https://t.co/cHmf5b0dI7
— Omar Jimenez (@Omar Jimenez) 1604773847.0

In New York, revelers cheered in Manhattan, including hundreds gathered outside Trump Tower. In Los Angeles, drivers blared their horns and people danced in the streets.

Californians said they were proud that their senator Kamala Harris would be the first woman to become vice president, as well as the first Black person.

"That's huge as well -- personally because I'm a person of color, and I'm an immigrant, and she's the daughter of immigrants," Christian Barron, 38, said from Santa Monica boulevard in West Hollywood.

Large crowd outside of the gates in Wilmington, ahead of Joe Biden’s drive in victory remarks. https://t.co/UqA9sPvBQ9
— Gary Grumbach (@Gary Grumbach) 1604789717.0

While America's big cities celebrated, in other parts of the country, Trump supporters reacted with disbelief and denial, with many repeating the president's unsubstantiated claims of a stolen vote.

At the Maricopa County Elections Department in Phoenix, Arizona, Sharron Morris, a 51-year-old trauma recovery life coach, said: "I want my voice heard. It's wrong to win elections by fraud.

"Winning elections peacefully and honesty is the American way and I believe in that, but that is not what is happening here."

In Miami's Little Havana neighborhood, some said they still believed the US Supreme Court would overturn the result.

"The Supreme Court is the one that has to decide and is going to hit that home run. The evidence against Biden is overwhelming," she said.