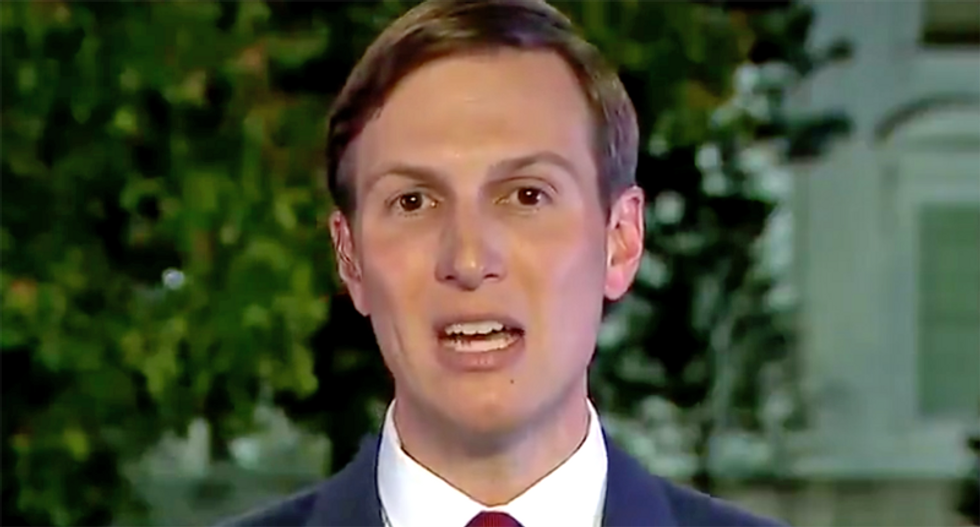 On Thursday, The Washington Post reported that a property management firm tied to Jared Kushner — who helped lead the White House pandemic response — is set to resume evictions caused by the pandemic as protections expire.

"Westminster Management, an apartment company owned in part by White House senior adviser Jared Kushner, has submitted hundreds of eviction filings in court against tenants with past due rent during the pandemic, according to interviews with more than a dozen tenants and a review of hundreds of the company’s filings," reported Jonathan O'Connell, Aaron Gregg, and Anu Narayanswamy. "Many of the Westminster tenants facing eviction live on low or middle incomes in modest apartments in the Baltimore area, according to tenants. Some of them told The Washington Post they fell behind on rent after losing jobs or wages due to the pandemic."

"A state eviction moratorium currently bars Maryland courts from removing tenants from their homes, and a federal moratorium offers renters additional protection," said the report. "But like other landlords around the country, Westminster has been sending letters to tenants threatening legal fees and then filing eviction notices in court ― a first legal step toward removing tenants. Those notices are now piling up in local courthouses as part of a national backlog of tens of thousands of cases that experts warn could lead to a surge in displaced renters across the country as eviction bans expire and courts resume processing cases."

Some of the tenants are already reporting horror stories.

"Tashika Booker, a resident of [a] Westminster property, Owings Run, says she used to work for an online education company. She lost her job in May and now receives a little more than $800 per month from unemployment insurance, but it’s not enough to cover her $1,300 rent," said the report. "She said she is looking for other ways to generate income, but Oct. 8 she received an email from the property manager saying, 'we have filed on you with the District court of MD, so court fees will be added to your account.'"

Kushner, who has been at the forefront of the White House procurement efforts for the pandemic, recently drew controversy for suggesting on Fox News that Black people don't sufficiently "want to be successful."