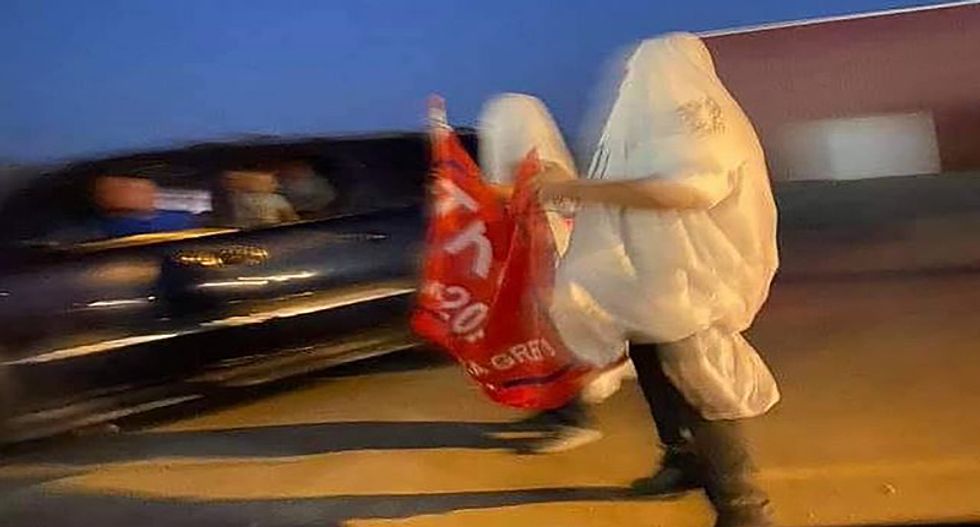 Local protests in Muncie, Indiana, took an odd turn Sunday night when two individuals wearing white sheets that covered their faces waved "Trump 2020" signs at passing vehicles on South Main Street. The men were reminiscent of the Ku Klux Klan (KKK), which have prominent chapters in the area.

A pickup truck containing their apparent associates was parked nearby in a lot south of East 18th Street, the Muncie Star Press reported.

The pastor said he wanted to make it clear he did not think the incident was reflective of the views of local Republicans.

"This is not a Republican issue," Draper said. "This is about ignorant people doing hateful things."

Muncie Police Chief Nathan Sloan on Monday confirmed his officers had contact with the protesters, but reported that they were "perhaps clad in white trash bags, rather than sheets, and referred to themselves as 'Ghosts of Trump,'" according to the newspaper. "We have to protect everyone's rights, even when we don't agree with their message," Sloan said.

Delaware County Prosecutor Eric Hoffman said Monday he had not seen the photos and videos of Sunday's protest, "However, there is no place in our community for anyone who desires to revive ancient, outdated and unacceptable vestiges of racism, bigotry and hate. This includes the wearing of KKK robes. This is 2020 and Muncie is better than that."

Hoffman said while he supports and defends "everyone's First Amendment right to speech, protest and assemble, I denounce violence, harassment or intimidation."