Conservative Michele Malkin live-tweets a dead cause in Arizona 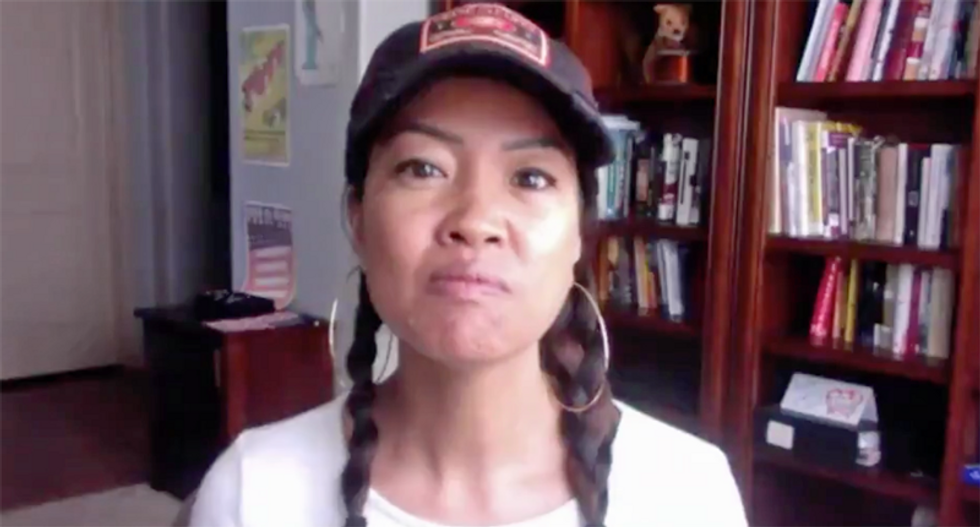 This was a split screen for the ages. On one half, you had Arizona’s conservative Republican governor Doug Ducey solemnly certifying the official results of his state’s election, which included an electoral victory for Joe Biden and Kamala Harris. On the other half, there was this lunatic lady named Michelle Malkin live tweeting from a hotel ballroom sprinkled with people hallucinating about undoing what had just been done in the real world.

To be fair, Malkin is a wicked smart lunatic lady, who rakes in lots of money dishing xenophobia and other sources of right-wing rage for low-information patriots. So Malkin may just have been monetizing a little manufactured madness. But it was mad.

For background, Malkin’s challenge today was to match the singular weirdness of her recently pinned tweet, which was a public exhibition of right-wing Tourette’s Syndrome:

This was no small task, unless Ukranian spy Rudy Guiliani and the Addams family of legal teams just planned to start sputtering “Soros! BLM! Dominion! Antifa! Smartmatic!” in front of an unofficial gaggle of pandering GOP legislators in the hope that God would start shaking the ballroom chandeliers. No, Malkin had to get creative.

She got in the spirit early by sounding reveille:

That had to feel good. But then it was time to put away the bugle and chronicle the goings on at the Hyatt Regency Hotel, which isn’t anything like a legislative chamber even when legislators show up to one of its ballrooms. Just like it isn’t a house of ill repute if Rudy Guiliani is helping make a film there.

But after chronicling a modest gathering outside of fist-shaking protesters outside the hotel, Malkin did a really fine job of embellishing the non-hearing in a non-government building featuring a small number of non-mattering Republican legislators. Malkin approached it as if was at the O. J. Simpson trial.

Even before it started, Malkin posted a startling item about “election-rigging foxes… guarding the henhouse” which revealed the names of dastardly representatives of Dominion, Smartmatic and others on a very suspicious looking document. She probably should have used a screen shot rather than a link. When one clicked, it just led to an innocuous page on an official federal government website where vendors (such as voting-machine providers) are encouraged to take part in something called Sector Coordinating Councils (SCC’s) to help government do its job.

It turns out that SCC’s are really boring entities, not nefarious at all, but if all you did was glance at the tweet -- or if you clicked on the link and were scared by the big words -- you’d have thought it was the scandal of the century. Here’s the tweet:

The election-rigging foxes are guarding the henhouse -- here in America and around the world.… https://t.co/CnybXttQKb
— Michelle Malkin (@Michelle Malkin)1606758562.0

This was the pattern that would follow Malkin’s tweets: If you glanced at them without clicking, you were just blown away by the “WOW’s” and the gasps and the loud applause and a standing ovation. Trouble is, Malkin included the actual video of some really mundane people socially distanced in a freaking Hyatt Regency ballroom.

Malkin really shouldn’t have posted the videos. The loud applause was barely audible. The gasps were murmurs. The standing ovation was probably a couple of the older people heading for the restrooms. The zingers didn’t zing.

Don’t take my word for it. Judge for yourselves, although you might have to wade through www.thegatewaypundit.com to get there, which you might not want on your browser history:

Those are actually pretty funny if you watch the videos and then try to figure out how Malkin was able to invent such strangely unrelated captions. A couple of them do include Rudy trying to channel his inner Catskills lounge act, with very little to show for it in the way of laughs, but to be fair most of the audience was probably looking at their phones for Michelle Malkin tweets to explain what they were watching.

Still, my personal favorite the one for which you’re invited by Malkin to view the “video scroll of the anonymous whistleblower's email to entire AZ state legislature re. embedded fraudulent ballots.” It turns out that the scroll is totally illegible and mostly just sits there without scrolling. But here it is:

It’s good stuff, these live tweets by Michelle Malkin, especially if you want to capture the non-essence of this strange non-event. And if that doesn’t satisfy your lust for truly red meat, there’s always this:

Writing for Vanity Fair this Monday, Bess Levin says that if Donald Trump had any shame, the last time we'd have to hear from him would have been the day he left the White House. "But Trump, of course, has no shame. Or integrity. Or morals. Or decency. Or respect," she writes.

At CPAC this weekend, Trump hinted that the next four years will look like, which will likely one long revenge campaign against whose he deems as disloyal, siccing his "fascist mob of followers" on people who spoke out against him like he sicced them on Mike Pence.