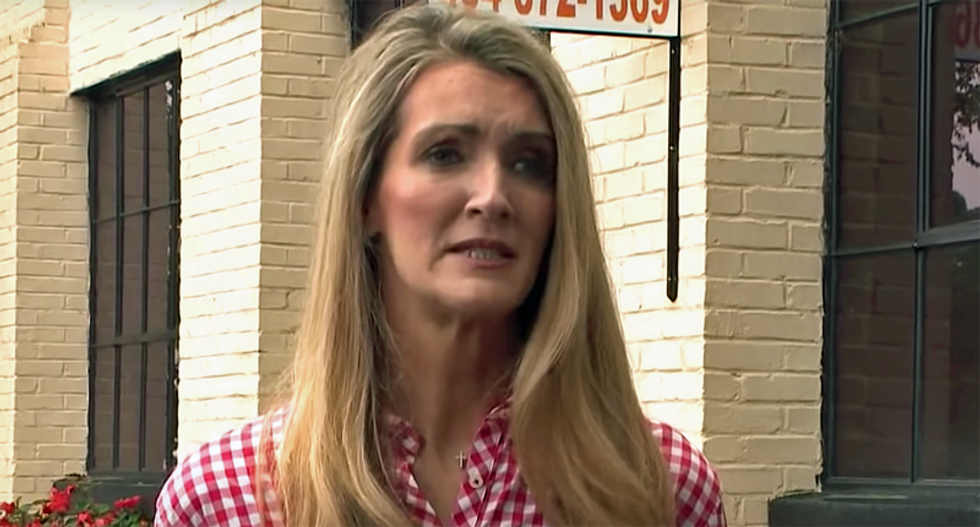 Sen. Kelly Loeffler, the unelected multimillionaire Georgia Republican senator facing a critical runoff election this January which will determine control of the U.S. Senate, released an ad over the weekend claiming that she knows "how it feels" to wait on a paycheck.

"It's so important to have Senator Loeffler in the Senate, especially right now. What we need more than ever is a business mind," Janelle King, who is billed as the founder of Speak Georgia but is also the former deputy director of the Georgia Republican Party, says in the ad. "We need someone who understands not just how to write paychecks and sign paychecks but how it feels like waiting on that paycheck."

While the ad plays to economic anxieties brought about by the coronavirus pandemic, Loeffler has not supported another round of stimulus checks.

Loeffler, who has held executive positions for well more than a decade at her husband's company, Intercontinental Exchange (ICE) — which owns the New York Stock Exchange, among other markets — is worth between $800 million and $1 billion, according to Forbes. That makes her by far the wealthiest member of Congress.

Weeks after Georgia's Republican Gov. Brian Kemp named Loeffler to replace outgoing GOP Sen. Johnny Isakson last December, ICE issued her an unusually structured severance package estimated to be worth more than $9 million. The deal immediately vested stock options worth more than $1 million, which otherwise would have been worthless, and did the same for half of her $15.6 million stake in ICE cryptocurrency subsidiary Bakkt, where she served as chief executive officer.

At the time of Loeffler's exit, an estimated 14% of Americans owned some form of cryptocurrency, with a median investment of $360.

Over the next year, amid the backdrop of the coronavirus pandemic, the couple offloaded more than $58 million in stock of their own company, Salon reported on Saturday. In the context of years of trades, the dumps showed an irregular pattern, with Sprecher quadrupling previous sales of any other year.

The couple was later investigated for possible insider trading after news reports revealed a series of market transactions ahead of the coronavirus pandemic, including activity on Jan. 24. Loeffler received a classified briefing on the public health crisis that day.

While the Department of Justice and Republican-led Senate Ethics Committee both eventually cleared Loeffer, it is unclear what became of a parallel Securities and Exchange Commission investigation into the trades. Through those sales, Sprecher also appears to have violated conflict of interest rules enumerated in the New York Stock Exchange code of conduct.

The appointed senator's recent ad continues with a male voiceover touting her position on issues such as school choice, creating opportunities for minority-owned businesses and a "comprehensive healthcare plan for all Georgians."

After Loeffler moved from the general election to a runoff against Warnock — the Black pastor of Ebenezer Baptist Church in Atlanta — she compiled her 13 pieces of healthcare legislation into one single plan, proposing a market-based solution to expanded coverage. Warnock supports a public option.

Loeffler's record on minority businesses, which had disproportionately less access to crucial pandemic relief funds, is unclear. A bill called "Reaching America's Rural Minority Businesses Act of 2020" was introduced to the Senate in October, but she was not one of the four co-sponsors, which included two other Republican senators.

The third plank of the ad, school choice, implores a euphemism for religious and often segregated education options.

Two of Loeffler's recent digital ads were pulled for violating YouTube's terms of service, including one on Nov. 20. A YouTube spokesperson declined to tell Salon why the ads were pulled.

Loeffler and GOP colleague David Perdue have called for Georgia's Republican secretary of state to resign in the wake of President Donald Trump's historic defeat in the deep-red state. Right-wing voters who view the pair as insufficiently supportive of the president's efforts to overturn the results have called for a boycott of the runoff, which is scheduled for Jan. 5.

"I'm seeing a lot of talk from people that are supposed to be on our side telling GOP voters not to go out & vote for @KLoeffler and @Perduesenate," Donald Trump Jr. tweeted in the duo's defense. "That is NONSENSE. IGNORE those people."

You can watch the Loeffler's new ad below via YouTube: