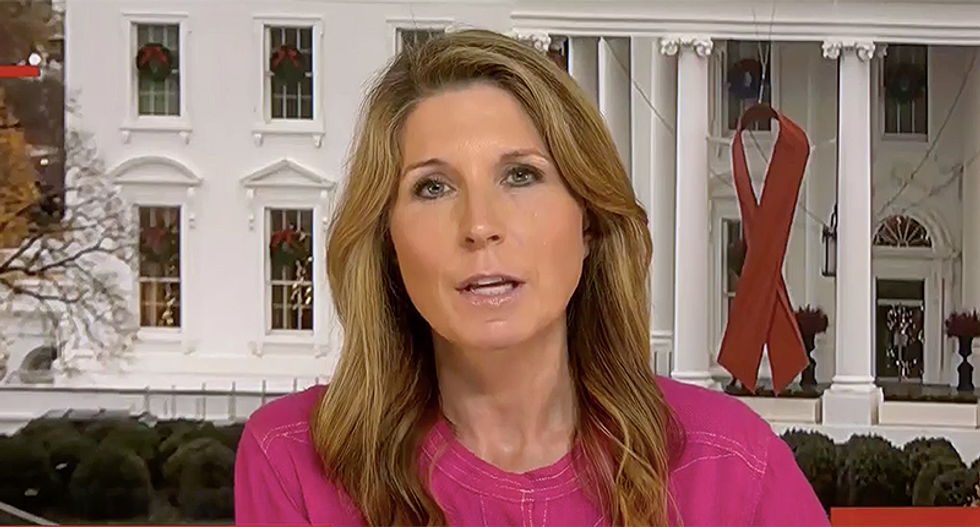 In an interview with former Republican Party Chairman Michael Steele, MSNBC's Nicolle Wallace wondered, "why are Republicans willing to sell their souls for" President Donald Trump's "big lie" that he won the election.

Wallace said that she's "interested in moving on from Donald Trump as much as anybody," but the Washington Post report that he's wandering around the White House mumbling to himself "I won. I won. I won," is dangerous. She explained that convincing his supporters that the incoming president is a fraud is "the most dangerous lie yet."

"It is always dangerous when he lies to his voters, but it is creating an unprecedented and perhaps unsustainable instability to make his supporters, to make half of this country doubt the validity of Joe Biden's victory," said Wallace.

Steele said that Trump hasn't had to do much convincing to his supporters; they were primed to believe the election would be "rigged" if he lost.

"He picked a scab in which they already believed a lot of this," said Steele. "It was beneath the surface. It has been there for a long time, this overwhelming sense of mistrust of our institutions and our executive and political leadership. It's been there. We've seen it. It manifests itself during my watch during the RNC. It was in place during the Bush years. It goes back to Newt Gingrich's uprising in the House of Representatives back in 1994 and even before that. So, what Donald Trump was able to do was to give it legitimacy, to give it voice, to give it an actual voice in the body of the president, in the body of the presidency."

He went on to say that he thinks Americans must understand it's less about the work of a mad king and more than the mad king is "reflecting his mad people."

"By that, I mean angry, frustrated," said Steele. "Suffering victimhood and all of that. So, there's a lot that we want to put on Donald Trump's doorstep and deservedly so, but I think we also have to contextualize where a lot of that originated from, not with him, but what makes what he's done so bad is that he is the president and most presidents, all presidents, up to him, understood that this was there, but still guided the country away from that. [They] did not give into those feelings and tried to address them in other ways. This president said 'to hell with that,' we're all in on it. And here we are, 70-plus million votes later."