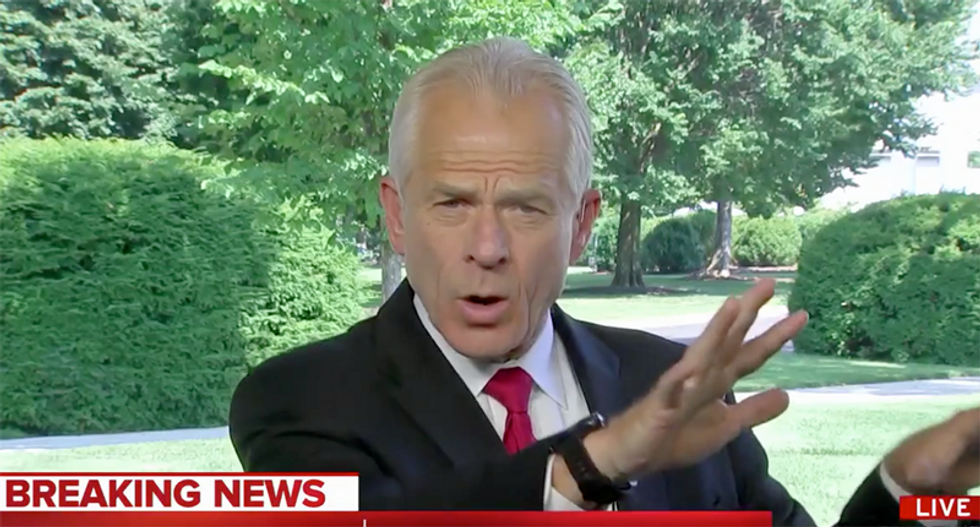 Peter Navarro is being accused of violating the Hatch Act by taking to the campaign trail as a White House official. According to the law, only the president and vice president are allowed to campaign, but in President Donald Trump's administration, the rules are ignored.

The Daily Beast reported the Navarro law-breaking on Monday a little more than 24-hours before the election ends. Thus far, the director of the White House Office of Trade and Manufacturing Policy has been to Florida, Maine, Michigan, Minnesota, North Carolina, and Pennsylvania. He didn't make speeches about trade or the economy to policy leaders. Instead, he pitched Trump.

He stays away from buzzwords like "vote for" or "cast a ballot," but he gets about as close as he can.

"The Obama-Biden administration raised taxes, increased regulations, suppressed development of America's natural resources, slashed the defense budget, and failed to crack down on unfair trade practices by countries like the Communist China," the Daily Beast cited the opening sentence in three reports. "The Trump-Pence administration has pursued just the opposite policies while following an 'all job creation is local' strategy to stimulate economic growth."

There's no punishment for the Hatch Act, not even a fine, making the law completely pointless.

As Election Day approaches, White House press secretary Kayleigh McEnany and senior Trump advisor Steven Miller have taken on the role of campaign spokesperson to conservative media outlets, even though they're not supposed to be doing campaign work.

White House spokesman Judd Deere said that all of the government officials are following the law.

The Citizens for Responsibility and Ethics in Washington or CREW filed a report "on allegedly illicit Trump administration politicking highlighted two cable news appearances by Navarro last month in which he promoted his office's new swing-state reports," said the report. "In a letter to the Office of Special Counsel, which investigates Hatch Act violations, the group also noted Navarro's use of his official Twitter account to explicitly call for Trump's reelection."

The next day, Navarro removed the "45" from his Twitter handle and changed his bio so that it would be his "personal" account.

Navarro's economic reports don't specifically cite former Vice President Joe Biden, but during a Fox Business appearance on Oct. 19, Navarro said his reports are establishing a "contrast between the policies of President Trump and Joe Biden."

The Office of Special Counsel told the Beast that it agrees Navarro has violated the law as the context references the "Obama-Biden administration" and cites policies that "sets Trump apart" from his political opponents. You can't get more political.

Donald Sherman, CREW's deputy director said that Trump and his team are "essentially saying to the American public is that despite a global pandemic and an economic crisis affecting 50 states and all of our U.S. territories...that these handful of states are the only ones that need the attention of the White House Office of Trade and Manufacturing Policy," Sherman said. "It's a slap in the face to people who are hurting in deep blue states, deep red states, and every state not included in this list of battleground states that the president is desperately trying to use federal resources to win over."