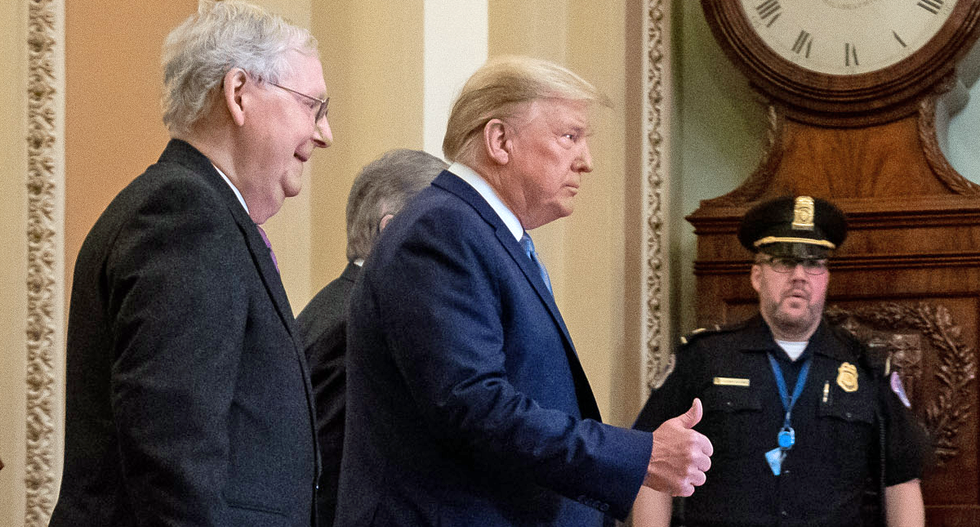 In an editorial for the Washington Post, Republican lawyer Ben Ginsberg lamented that his party is "destroying itself" all for President Donald Trump.

"President Trump has failed the test of leadership," he wrote Sunday afternoon. "His bid for reelection is foundering. And his only solution has been to launch an all-out, multimillion-dollar effort to disenfranchise voters — first by seeking to block state laws to ease voting during the pandemic, and now, in the final stages of the campaign, by challenging the ballots of individual voters unlikely to support him."

He explained that Trump and the GOP's voter suppression efforts are as "un-American as it gets." He also noted that it harkens back to "the bad old days" of efforts when courts required the GOP to stop their efforts to intimidate and suppress voters.

"It puts the party on the wrong side of demographic changes in this country that threaten to make the GOP a permanent minority," said Ginsberg. "These are painful words for me to write. I spent four decades in the Republican trenches, representing GOP presidential and congressional campaigns, working on Election Day operations, recounts, redistricting and other issues, including trying to lift the consent decree."

When he was working to uncover "voter fraud" in 1984, Ginsberg said it was almost non-existent. Now it's become like the Loch Ness Monster of the GOP, he explained.

"As he confronts losing, Trump has devoted his campaign and the Republican Party to this myth of voter fraud," he continued. "Absent being able to articulate a cogent plan for a second term or find an attack against Joe Biden that will stick, disenfranchising enough voters has become key to his reelection strategy."

Trump claimed the election would be "rigged," and that may have been part of his plan the whole time, Ginsberg wondered. However, the problem is that Trump is dragging the GOP along with him in an effort to suppress the vote, which will make things worse for Republicans. In Florida, there is already evidence that the Republican Party's efforts to get GOP voters to vote by mail had taken a huge hit after Trump's crusade against the practice.

"Trump has enlisted a compliant Republican Party in this shameful effort. The Trump campaign and Republican entities engaged in more than 40 voting and ballot court cases around the country this year. In exactly none — zero — are they trying to make it easier for citizens to vote. In many, they are seeking to erect barriers," noted Ginsberg.

The message from Democrats has been that when all Americans vote, Democrats win, because the country is far more progressive than the Senate or White House knows. Instead of evolving on issues, Republicans have sought to turn further right and appeal to a shrinking minority in the U.S. and suppress as many other voters.

Republicans have sought to demand that ballots not be fully counted even if mailed several days before Election Day. They've taken states to court demanding laws be ignored about continuing to count votes beyond a certain time, even if the ballots were cast before the deadline on Election Day. In Texas, Ginsberg said he was ashamed to see the GOP try to throw out 127,000 ballots cast by people who didn't want to go inside a polling place due to the pandemic. The Texas law specifically cites curb-side voting is possible for "public health" reasons. A conservative judge threw out the GOP's request.

"How sad it is to recall that just seven years ago the Grand Old Party conducted an 'autopsy' that emphasized the urgency of building a big tent to reach communities of color, women and young voters," recalled Ginsberg. "Now it is erecting voting barriers for those very groups. Instead of enlarging the tent, the party has taken a chain saw to its center pole."

He closed by saying that the GOP he once knew "is destroying itself on the Altar of Trump. Republican elected officials, party leaders and voters must recognize how harmful this is to the party's long-term prospects. My fellow Republicans, look what we've become. It is we who must fix this. Trump should not be reelected. Vote, but not for him."